Driving through Pomeroy, Ohio, one can easily imagine the town was dreamt up by the subconscious: a dream whose cells split and multiplied, spawning a slew of storefronts clinging onto the banks of the Ohio River. The high strangeness factor about the place is, well, high. That impression speaks to an impossible-to-quantify truth about the place, and it is no coincidence that mystifying sounds are crafted in this extraordinary river town. Such as the sounds made by Jake Dunn & the Blackbirds.

The cover of their latest, the aptly titled Cosmic Americans, (released Friday, May 24, 2019) features the five-piece band on the steps of the Meigs County Courthouse, a 150-year-plus-old structure in Pomeroy that is listed in Ripley’s Believe It or Not! for being one of the only structures in the world with a ground level entrance to each of its three stories. Such delectable oddness leeches throughout the full-length to incredibly satisfying effect. 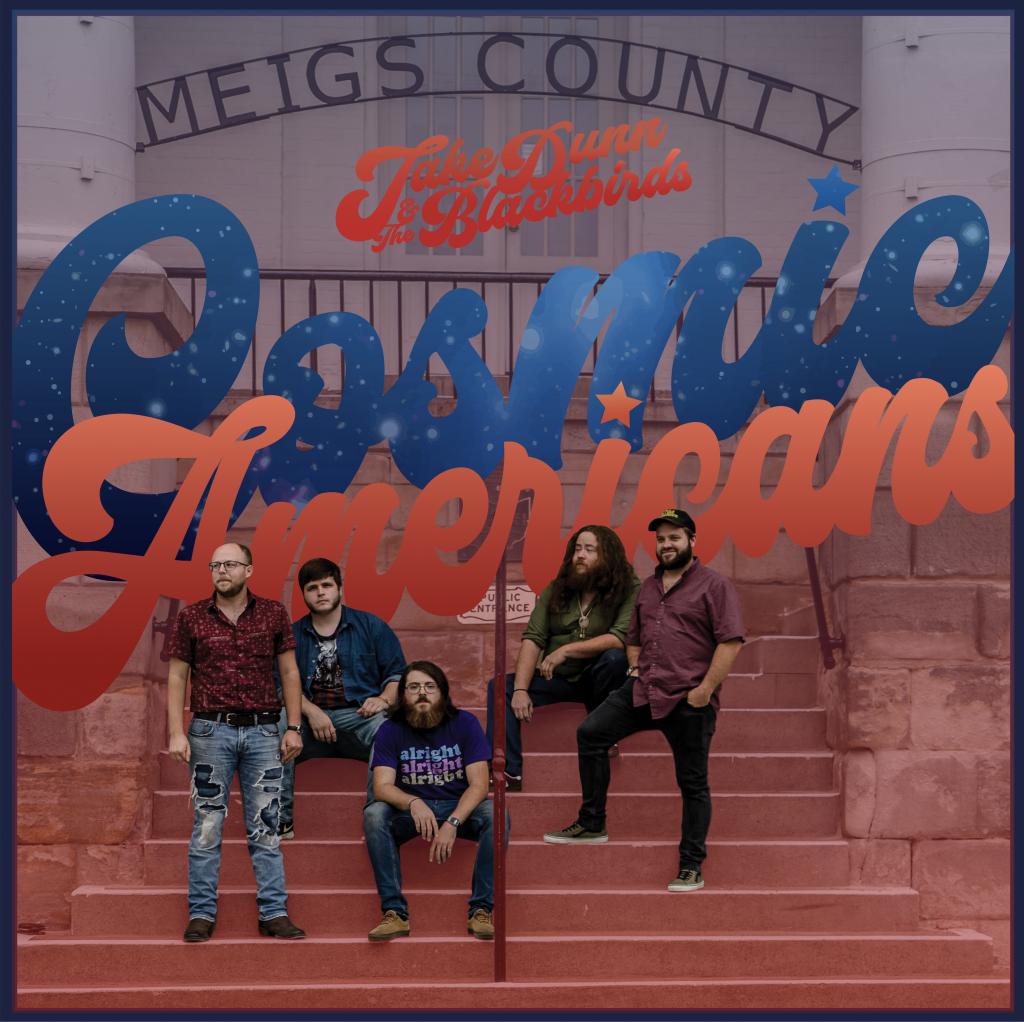 Opener “Thank You” starts with a hollow banging that swells into a girthy guitar sound that Billy Gibbons would be proud of, all to the beat of a solid rhythm section that parts ways for Dunn’s cleverly aggressive lyricism and guitarists Chuck McPeek’s and Dustin Nash’s forays into (almost) progressive metal tinged guitar solos. This is ballsy Americana at its tastiest, to put it simply. “Thank You” bleeds into the steady melancholy of “Low,” whose protagonist is both plagued by self-doubt and the merciless churning of time. Towards the end of the track, the listener is treated to a contained explosion of psychedelic rock guitar – a sonic concoction whose DNA dates back to sometime around 1969, or maybe even further.

That’s the thing, Jake Dunn and his boys are crafting music that lies largely at the very American intersection of country music and psychedelic rock. Or perhaps country music has been psychedelic this whole time. After all, didn’t Gram Parsons, the granddaddy of the genre we now know as “alternative country,” attempt to popularize what he referred to as “cosmic American music” throughout the duration of his painfully short career?

Sure, in 2014 Sturgill Simpson renewed popular interest in the hybrid genre with the success of Metamodern Sounds in Country Music. Tyler Childers’ Simpson-and-David-R.-Ferguson produced 2017 album Purgatory did the same in its specifically Appalachian sort-of-way, and so have dozens upon dozens of other works, many of them very regional to the Mid-Ohio Valley. But, the truth is this: Hank Williams Sr. was doing something pretty psychedelic in penning and recording an extensive, amphetamine-fueled library of songs that documented the heartbreak and joy of the everyman some 60-plus years ago. (It’s worth noting that Jake Dunn and The Blackbirds have their own ode to Williams, “52 Cadillac,” released in 2017.)

Not every part of Cosmic Americans is purely psych-rock, there’s a real bluesy, hard rock influence too. “Roadside Rest” is a prime example. The track has a charmingly goofy video, with bassist Bobby Wheeler running around, causing trouble in a likeable way. The driving percussion is very ZZ Top, and the bold guitarwork on top of it is very Lynyrd Skynyrd or maybe even a little Tom Petty. “Roadside Rest” is followed up by the luscious “Old Enough to Know Better,” which also features quite the Allen Collins/Gary Rossington guitar solo. The song has a certain sonic oscillation quality to it that does somewhat emulate the pleasant sensation of a quickly downed liquor drink, not unlike the one the song’s lyrics mention early on.

“Sins to Come” is the first single off the album, Jake Dunn and company taking on the hallowed country music tradition of the story song to fine effect. The song has a momentum that spins what begins as a mid-tempo experiment into a spiraling cocktail of hard-edged guitar riffs and intensifying vocals. The album ends with the wistful “Isabella.” Pensive and mournful, the song is filled out with tinny banjo flourishes guiding the listener through a sad tale of a romance disrupted by the cruel cascade of the passing years. It’s a very American tune to end a very American album, and one that could only be made on the often surreal, and always beautiful, banks of the Ohio River.

Jake Dunn & the Blackbirds will celebrate the release of ‘Cosmic Americans’ with a show at The Union Friday, May 24 alongside special guests Ben Davis Jr. and the Revelry and Charles Wesley Godwin.