PBS Digital Studios, dedicated to developing thought-proving programming for the curious minds of the Internet, is celebrating the 50th anniversary of the lunar landing with the launch of STELLAR, a six-episode space-themed miniseries on PBS’s Facebook and YouTube pages. Beginning Thursday, June 20, STELLAR will feature three of PBS Digital Studios’ most popular, space-loving hosts – Matt Dowd (SPACE TIME), Dianne Cowern (PHYSICS GIRL) and Joe Hanson (IT’S OKAY TO BE SMART) on location at space flight centers around the country highlighting current developments in space exploration, astronomy and astrophysics. 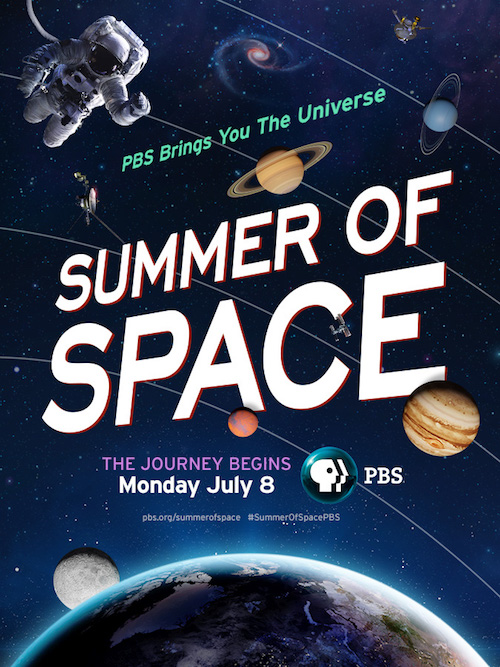 “STELLAR is an evolution for PBS’s original digital programming, it blends together the cinematic quality of broadcast science documentaries with the communal spirit of YouTube and Facebook,” said Brandon Arolfo, Senior Director, PBS Digital Studios. “We’ve brought together three of PBS’ biggest science creators to help bring the universe to digital audiences and couldn’t be more excited to share this great content in celebration of this momentous anniversary.”

As part of the previously announced “Summer of Space” multiplatform experience, STELLAR will accompany more than 20 compelling space-themed offerings throughout the summer. New offerings from the PBS Digital Studios network include an episode on martians from MONSTRUM, a look at a space-themed art from ART ASSIGNMENT, an ORIGIN OF EVERYTHING episode that asks “why did we plant a flag on the moon?” and a video from AMERICA FROM SCRATCH that looks at whether or not we should colonize Mars.

In addition, a “Summer of Space”interactive hub is coming in July to pbs.org where viewers will be invited to submit videos, photographs, audio recordings and text entries sharing their love of space exploration and how they experienced the Apollo 11 mission. Educators, students and life-long learners will also find “Summer of Space” classroom-ready materials available on  PBS LearningMedia.

An overview of STELLAR and its weekly premiere dates are as follows:

In this episode, host Matt O’Dowd explores how Gemini Observatory detected the oldest and farthest object ever seen – the ancient J0439+1634 quasar. Dowd explains how humans use telescopes to expand their vision into the electromagnetic spectrum, revealing what’s out there millions and billions of light years away, just by analyzing the invisible wavelengths traveling through space.

Episode 2: Detecting Black Hole Collisions from 5 Billion Years Ago
Host: Dianna Cowern
Location: LIGO Hanford Observatory in Washington
Premiere Date: Tuesday, June 25
Going beyond the EM spectrum, it is now possible to see a phenomenon that was completely theoretical and invisible to all until just a few years ago: gravitational waves. By sensing the tiniest ripples in gravity, itself, we can see violent stellar collisions like the merging of black holes and neutron stars – events that happened hundreds of millions or billions of years in the past.

Episode 3: Imaging an Impossible Object with a World Sized Telescope
Host: Joe Hanson
Location: Submillimeter Array in Hawaii
Premiere Date: Thursday, June 27
Black holes began as theoretical curiosity in the minds of early 20th century physicists and slowly moved from curiosity to reality, as both the math and observatory observations verified the necessity of their existence. But we had no idea what they looked like and no way to take an image, until now. This is the story of how a worldwide group of telescopes used radio interferometry to not only prove irrefutably that black holes exist but show us what they look like.

Episode 4: How We Discovered the Universe
Host: Matt O’Dowd
Location: Mt. Wilson Observatory in California and American Museum of Natural History in New York
Premiere Date: Thursday, July 11
At the beginning of the 20th century humans thought the Milky Way Galaxy was the entire universe. By the end of the century we discovered the universe is composed of more than 100 billion galaxies. This episode is the story of that incredible awakening to the magnitude of our universe, starting with the discoveries of Edwin Hubble at Mt. Wilson Observatory in Los Angeles.

Episode 5: Where is Everyone?
Host: Joe Hanson
Location: Mauna Kea Summit and W.M. Keck Observatory in Hawaii
Premiere: Thursday, July 18
In this enormous universe there must be other intelligent life, so why haven’t we met them yet? We explore the Drake Equation to discover the likelihood that intelligent civilizations exist and how many of them there may be, and identify what risks they, and humanity, face as they grow into technological powers.

Episode 6: Can We Live Elsewhere in the Solar System?
Host: Dianna Cowern
Location: NASA Jet Propulsion Laboratory in California
Premiere Date: Thursday, July 25
Could we live anywhere else in our solar system? In this episode, we investigate how NASA’s rovers are setting the stage for human habitations on Mars and discuss the challenges we face in both getting there and creating a sustainable colony. And we explore Jupiter’s moon Europa and its ice-covered ocean, which very well may contain life.

STELLAR is produced by Kornhaber Brown, PBS Digital Studios’ longtime production partner behind Space Time and PBS Idea Channel. Support for the miniseries was provided by Draper and its Hack the Moon Initiative.

About PBS Summer of Space
PBS brings viewers the universe with SUMMER OF SPACE, a multiplatform experience that includes six new science and history programs, all commemorating America’s journey into space. The celebration officially kicks off July 8 with a new space-themed ANTIQUES ROADSHOW “Out of This World” and the epic three-part special “Chasing the Moon” from AMERICAN EXPERIENCE, charting the worldwide race to space during the 1950s and ‘60s. NOVA special “Back to the Moon”(July 10) explores how new scientific discoveries are fueling excitement for a return to the lunar surface, and its five-part series “The Planets” (July 24) brings to life the dramatic story of our solar system—from Saturn’s 45,000-mile-wide rings to Mars’s ancient waterfalls, to the raging winds of Neptune, and more. 8 DAYS: TO THE MOON AND BACK (July 17) tells the story of Apollo 11 with rare mission audio and CGI recreation of the crew experience, and in the three-part ANCIENT SKIES (July 24), audiences will discover the centuries of knowledge, experimentation and engineering that helped our ancestors explore outer space. Immersive and interactive space content will also stream concurrently on PBS.org, OTT and PBS apps. PBS Digital Studios will launch STELLAR, a new space-themed miniseries on Facebook and YouTube, and stations across the nation will feature images from NASA on Instagram Stories.