American Experience Stonewall Uprising To Have Encore Broadcast on Thursday, June 27, 2019 on WOUB 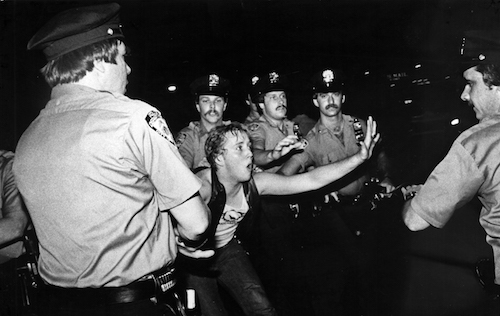 When police raided the Stonewall Inn, a popular gay bar in Greenwich Village in New York City on June 28, 1969, the street erupted into violent protests that lasted for days. The Stonewall riots, as they came to be known, marked a major turning point in the modern gay civil rights movement in the United States and around the world. Scheduled in conjunction with the 50th anniversary of the actual events, Kate Davis and David Heilbroner’s Stonewall Uprising will have an encore broadcast on American Experience on Tuesday, June 27, 2019, 9:00-10:30 p.m.

Based on David Carter’s Stonewall: The Riots that Sparked the Gay Revolution and told through interviews with Stonewall patrons, reporters and the policeman who led the raid, Stonewall Uprising recalls the fervently hostile climate in which the gay community was forced to live. The vast majority of medical authorities decreed homosexuality a mental disorder and often prescribed

brutal treatment, including lobotomy. Homosexual acts were illegal in every state except Illinois and gays frequently found themselves being hauled off to jail, their names splashed in the next day’s newspaper. Police entrapment was rampant, and being arrested meant that licenses to teach, practice law, medicine, or cosmetology might be denied or revoked.

Even in Greenwich Village, where thousands of people moved to escape the constant oppression of their hometowns, patrons of gay bars were accustomed to frequent police harassment. But on June 28, 1969, when the N.Y.P.D. raided the Stonewall, the gay community experienced what one Village Voice reporter who was on the scene called its “Rosa Parks moment.” For the first time, patrons refused to be led into paddy wagons, setting off a violent uprising that launched the gay rights movement. Exactly one year later, America saw its first Gay Pride Parade as thousands marched up Sixth Avenue.

American Experience is a production of WGBH Boston