Retirements have begun mounting for House Republicans more than a year ahead of the 2020 elections, a sign that optimism about flipping back control of the chamber is lacking.

A few are aging politicians, and several would have faced difficult reelection campaigns anyway. But some retirement decisions highlight that the Republican conference is sorely lacking in both gender and racial diversity. 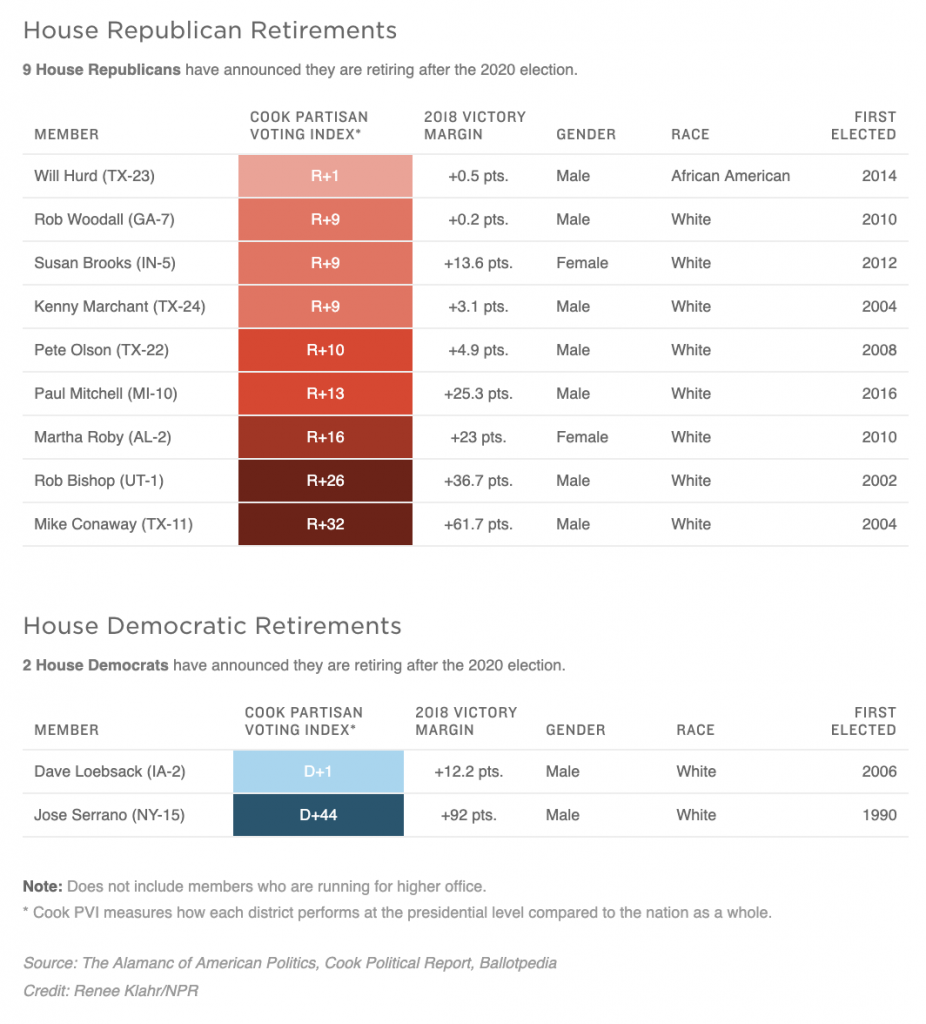 Such an exodus isn’t uncommon after a party loses power, and history shows that GOP retirements will likely grow, moving the party even further from the 18 seats it needs to win back the House. After the 1994 Republican Revolution, Democrats saw 24 retirements in 1996. In 2008, just two years after Democrats took back control, Republican retirements spiked to two dozen. And in 2012, the next cycle after Republicans had flipped the House back, 20 Democratic members decided not to run again.

Ahead of 2020, some of these announcements came earlier than usual. The most surprising retirement decision came on Aug. 1 from Texas Rep. Will Hurd, a 41-year-old lawmaker and the only current African American Republican in the House. A rare GOP critic of President Trump, Hurd only narrowly won reelection in 2018. Two other Texas Republicans who had surprisingly close reelections last year are calling it quits — Reps. Pete Olson and Kenny Marchant, opening up even more opportunities for Democrats.

The GOP also has just 13 women in its caucus, and two of them have announced they won’t run next year — Indiana Rep. Susan Brooks and Alabama Rep. Martha Roby. Brooks’ retirement was doubly problematic for the GOP given that she is the National Republican Congressional Committee’s recruitment chairwoman. Sending a signal that she isn’t interested in being in Congress any longer isn’t the best selling point for trying to get other candidates to run.

Democrats have had two retirements, so far. Iowa Rep. Dave Loebsack represents a competitive district that Trump won in 2016, putting it squarely in play for the GOP.