ATHENS, OH – Matt Barnes, BSJ ’08, returned to Ohio University this past weekend to moderate a panel discussion at the Alvin Adams Symposium. Adams was an African American journalist and civil rights activist who helped bridge the racial divide at Ohio University, in southeastern Ohio and across the nation. Barnes says he has long been inspired by Adams and has worked throughout his entire career to overcome racial barriers dating back to his time working as a student at WOUB. 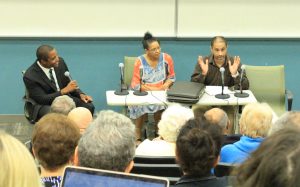 Barnes, who is now a morning television news anchor on NBC 4 in Columbus, was one of the first African American hosts of WOUB’s Gridiron Glory. The 30-minute TV sports show airs highlights of high school football games from across Southeastern Ohio. Barnes hosted the program for two years starting in 2006 and helped build strong connections with many people in the predominantly white Appalachian Ohio communities the show featured.

“I got to know people in the area through coverage of high school football. There were not a lot of people who looked like me in some communities, and I was able to create relationships and trust,” said Barnes. “Now when I go to communities like Jackson and Wellston in my current job, I get recognized as a former host of Gridiron Glory, and they welcome me. It means a lot.”

While he was a student Barnes also worked on WOUB’s Newswatch, a nightly student-produced newscast. After he graduated from Ohio University, Barnes worked mostly as a sports journalist. He recently made the move to the news desk and says his time working on Newswatch at WOUB made the transition easier.

“I thought back to the feedback and critiques I got as a student doing news at WOUB and applied it to my new role. I felt I could make that transition because of the experience I had from WOUB,” said Barnes. “Working at WOUB made me job ready when I graduated. I could do all the things I needed to be able to do. You can’t really put a measure on what that experience meant.”