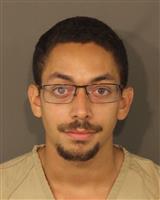 ATHENS, Ohio — A New York man has been arrested in connection with a more than two year old shooting that happened on the west side of Athens.

In August, an Athens County grand jury indicted Ramon Nieves, 25 on a charge of felonious assault in connection with the shooting of Alex Andrews.

Andrews was shot through his kitchen window in the early morning hours on January 19, 2017. He suffered injuries to his face, neck, chest, and abdomen.

Nieves in currently in the Franklin County Jail. He is scheduled to appear in court on Friday.