ATHENS, OH – When 29-year old Brian Boesch, HTC ’11, tells people at his new job where he went to college, it can be tricky. “I make sure to emphatically say ‘I went to Ohio University, not Ohio State’ because if I don’t make that clear, things can get complicated.” Boesch was recently named the new basketball radio play-by-play broadcaster for the University of Michigan Wolverines.

“I’m really excited. This is an amazing opportunity for me,” said Boesch. “Things are going to get started pretty quickly. November 1 is our first exhibition game, and the first regular season game is November 5.”

Boesch filled in on the Michigan basketball broadcasts last season which lead to him landing the full-time gig. From 2012-2017, Boesch was the lead play-by-play announcer for the Winston-Salem Dash in North Carolina, where he was twice named the Carolina League’s broadcaster of the year.

When he was a student at Ohio University, he took advantage of every opportunity to learn and grow. Boesch worked at WOUB in the newsroom and also at a local commercial radio station, Power 105.

“Ohio University changed everything for me,” said Boesch. “What I was able to do at WOUB, Power 105, through the Scripps College of Communication and Honors Tutorial was amazing. I’m so proud to have gone to that school and be a graduate. I loved my time there.” 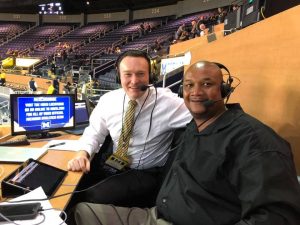 “I was so shy. At the end of fall quarter freshman year, I was trying to find my footing on my own and I ran into Tom Hodson, who was doing Ohio Women’s basketball on the radio. He asked me if I had ever thought about broadcasting? I chuckled. But before I knew it, I was doing halftime updates and color commentary,” said Boesch. “I wonder where my career would be without Tom and Jan seeing something in me that I didn’t see in myself.”

Now, looking back on his time in Athens, Boesch said he can clearly see what a special experience he had at Ohio University, the Scripps College of Communication and WOUB.

“I wear my Ohio University pride pretty strongly. I love the school, and I love everything I was able to do there,” said Boesch.  “To be able to work at places like WOUB, it’s a great way to build your network and get experience. You can grow in so many ways. I graduated eight years ago, and WOUB has continued to get better. It’s impressive. Everything that’s being done from a digital perspective with the podcasts WOUB has developed, I’m proud of knowing I came from that program. Students are going to be set up so well for their future.”

There is only one place where Boesch worries about how his Bobcat pride will affect him. He doesn’t know what he’ll do if Ohio plays Michigan in the NCAA basketball tournament.

“I tell people that the only time former Michigan Head Basketball Coach John Beilein lost a Big 10 or NCAA tournament opener was to Ohio in 2012,” said Boesch. “I don’t know what I would do if the Bobcats played the Wolverines in the NCAA tournament, but it would be a good problem to have. One thing for sure, unless they are playing the Wolverines, I’m for sure always rooting for the Bobcats.”