Tony Silvernail swings a heavy machete at a stalk of bushy hemp and chops the plant near the root, grabbing the five-foot-tall shoot with his sun-weathered hand.

It’s an unusually hot October day on his farm, Beyond The Bridge LLC, tucked in the hills outside of Frankfort, Kentucky. But the heat doesn’t faze Silvernail, sporting a sweat-soaked shirt, a huge smile, and a fat cigar between his teeth.

Silvernail and hundreds of others of farmers across the Ohio Valley are finally getting to harvest thousands of acres of hemp, the first harvest since the federal government legalized hemp cultivation last December.

“Oh, I’m happy as hell,” he said with a laugh. “We’re all like little kids, Shawn and I, getting all excited when we’re sitting here harvesting and talking. This is actually the glory part of being a farmer, as anybody whose livelihood depends on this. When you’re harvesting, it’s a happy time.”

He’s been an organic farmer for decades in Kentucky, and it wasn’t until last fall when he and his business partner, Kentucky State University professor Shawn Lucas, decided to try their luck at growing organic hemp for cannabidiol, or CBD. Silvernail said when he first became an organic farmer in the ’90s, he appreciated the advice experienced farmers shared with newcomers in the industry. But he said that hasn’t been the case with hemp.

“I’ve really adopted that sense of helping, and you didn’t really get that with the hemp industry. The hemp industry is still very closed,” he said. “So, I got in a bad mood and sitting there eating lunch with Shawn downtown, and I really came into a moment of ‘you know, we just got to do our own thing.’”

They co-founded an organic hemp cooperative for smaller hemp farmers. The cooperative purchases hemp seed and other supplies in bulk to get a better deal. It sells the members’ collective hemp harvest to processors, using the strength in numbers to bargain for better prices. And the cooperative helps farmers figure out how to even grow the crop in the first place.

Their cooperative is starting out small – 15 farmers in central Kentucky growing about 30 acres – and has already seen some challenges. They unknowingly purchased faulty seed and have had thieves stealing the crop right out of the fields. But Silvernail said it’s all part of the learning process.

“Ask us in November where our sales were at, how we all did,” Silvernail said. “We can cry on each others’ shoulders over a beer when we realized how badly we may have screwed up or what we didn’t do, but hopefully next year will be better.”

Cooperatives aren’t a new idea in farming. But they’re new in the hemp industry, and many Ohio Valley hemp growers are choosing to join cooperatives to share supplies and give small growers a better shot in an increasingly competitive marketplace. Regional agriculture leaders are championing hemp’s potential for farms of all sizes. But these hemp farmers worry that the sort of corporate consolidation they’ve seen in other agriculture sectors will soon come to the new hemp industry.

Leach, founder of the West Virginia Farmers Cooperative, said he testified in 2017 against initial versions of a state bill, that he said would have prevented the sale of CBD products in the state unless the product was approved by the Food and Drug Administration.

That portion of the bill was supported by lobbyists from the British company GW Pharmaceuticals, the proprietor of Epidiolex, used to treat epilepsy-caused seizures. It is currently the only CBD-derived drug approved by the FDA. Other CBD advocates that year in other states also worried about similar state legislation being pushed by the company.

Leach said initial versions of bill could have closed off a lucrative market for West Virginia hemp farmers.

“So that was one of the, I think, apparent instances where you get kind of these bigger companies that come in and try to monopolize the market,” Leach said. “We were able to overcome that and preserve this market opportunity.”

Leach doesn’t want the new hemp business to follow the route some other agricultural sectors have, such as the poultry industry.

Large poultry companies often have extensive control over a farmer’s production and pricing. That has led to a massive class-action lawsuit alleging that large firms use data to keep prices for poultry high while payment for farmers remains low.

Leach sees that as a cautionary tale about the effect larger corporations can have.

“The company owns those birds from the time they hatch to the time they purchase them, and then the farmer is stuck with the bill for raising those and the chicken house to do it. I think that’s a poor example,” Leach said. “Some are making money, but they’re totally hamstrung to the price that the company gives them, because it’s just how it goes in that industry. [Hemp] is a new frontier.”

Leach founded his co-op in 2015 in part because he doesn’t want a similar situation to happen with hemp.

“That’s our goal, is to be able to keep the five-acre farmer in business even when the bigger companies move into this space,” Leach said. “A co-op is a one member, one vote organization, so all of my members hold shares of stock. That stock is restricted only to farming members. So, farmers are the entirety of the makeup of our organization.”

Leach said it’s ultimately up to the individual farmer whether they want to grow in a co-op, grow independently, or grow under contract for one of many hemp processing companies entering the business.

“I think it’s just kind of a difference in philosophy,” Leach said. “I’d just rather be part of a farming co-op where I have a voice and I have a vote.”

But Leach said he’s worried about the potential for future large-scale hemp production that could push smaller hemp growers out. By banding together, small farmers can compete with larger-scale production.

Jeffery Young is an agriculture economist with Murray State University’s Center for Agricultural Hemp in west Kentucky. He agrees the potential is there for future hemp consolidation.

“I don’t want to say ‘join or die,’ but it would definitely be in a smaller operator’s best interest to join in on that,” Young said. “They wouldn’t have the acreage, or the volume or the clout that a larger operator would have.”

Young said the new industry is still years away from reaching a level of large-scale production that would pressure smaller hemp farmers. But the nascent industry is booming, and the amount of hemp grown in the Ohio Valley continues to skyrocket. 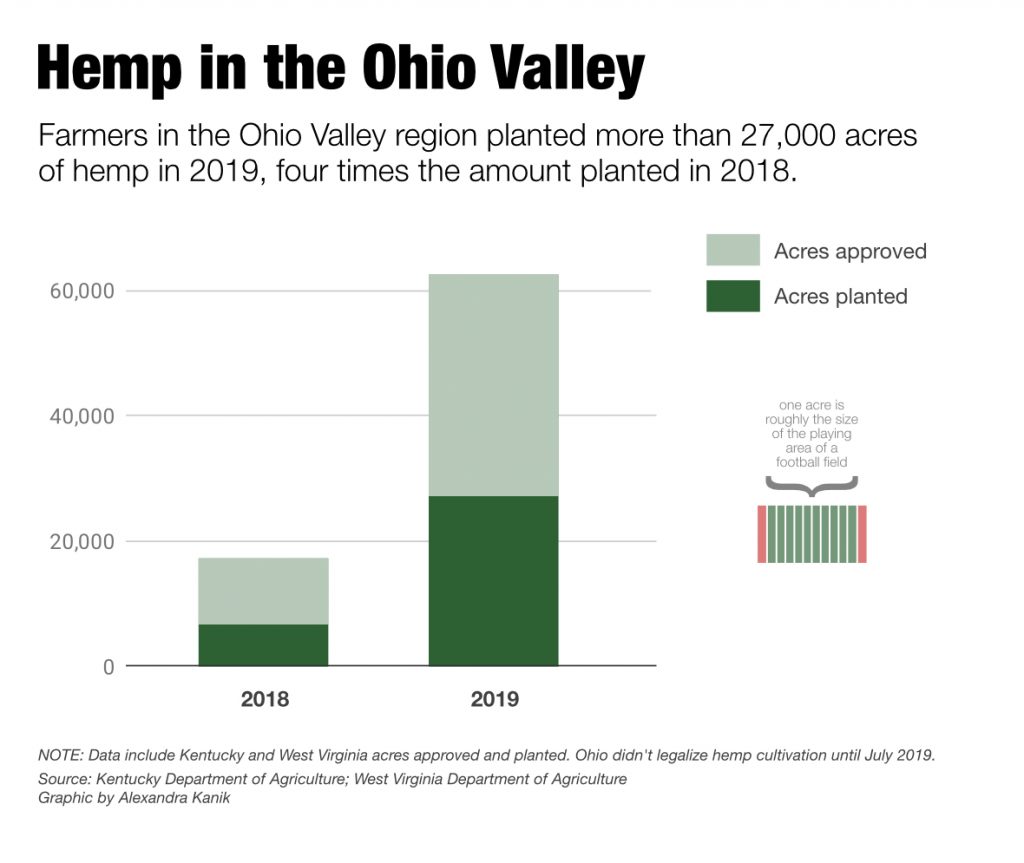 The number of hemp acres planted in Kentucky this year, compared to last year, nearly quadrupled to about 26,500 acres. West Virginia saw a similar jump with 641 acres planted, according to state agriculture officials. With zooming demand for hemp to turn into products like CBD, prices for the crop are far from set in stone.

“It depends on things like geography, what kind of processors are there nearby, how many are nearby, what variety is being grown, what quality of product is being produced,” Young said. “The market is still trying to get its sea legs, if you will. There’s a great deal more risk with hemp…and so through sharing of risk, that would would be a key benefit from forming a cooperative.”

Much of the risk comes from the learning curve many new growers face. Pesticides are still being tested to control weeds and insects, federal crop insurance for hemp won’t be available until next year, and in some cases, THC levels in hemp can spike above the federal limit that classifies the crop as hemp. THC is the psychoactive compound in marijuana, and is also present in trace amounts in hemp. Hemp with THC levels above 0.3 percent is reclassified as the crop’s illegal cannabis cousin, and has to be thrown out.

While cooperatives can shelter hemp farmers from some risk, the set-ups can bring on new perils for farmers as well. Aleta Botts, Executive Director of the Kentucky Center for Agriculture and Rural Development, works with cooperatives of all kinds to help them become sustainable.

She said because most hemp farmers are still learning how to consistently grow the crop, there’s a chance that a co-op might promise a hemp processor to grow a certain amount of hemp and fall short because of crop failures.

“We’re going to get to harvest and not have those pounds to market. So we’ve built our financials on a level that we’re not gonna be able to achieve,” said Botts.

Unlike in the rest of the Ohio Valley, Ohio farmers aren’t harvesting hemp this fall because the state only legalized growing hemp in July. But that hasn’t stopped widespread interest in growing hemp, something that was apparent at a recent summit for potential hemp farmers in southern Ohio.

“I printed off, I think, 480 some lunch tickets, and they were all gone. So the interest is huge,” said Julie Doran, who founded the Ohio Hemp Farmers Cooperative in December.

She was also one of the few critics who panned parts of the state legislation legalizing hemp cultivation in Ohio. She feared that the bill’s language setting “financial responsibility” standards could limit in-state participation in the state’s hemp program and instead favor out-of-state companies with more experience and access to capital.

Doran said she believes there’s a place for smaller farmers alongside larger investors, but she also cautions that farmers need to learn how to grow the new crop reliably before working with bigger companies that might want to grow larger acreages more quickly.

“It’s not like any other crop that they farmed,” Doran said. “Yes, corporate is going to come in and we are going to need them for an outlet to sell all this stuff, too. But we need to learn ourselves first. And, you know, get our feet wet before we jump in.”

Hemp Poised for Another Growth Spurt in Kentucky