A free premiere screening will be held March 22, 2020 at Gallia Academy

ATHENS, OH – The new trailer for Our Town: Gallipolis starts with the words: “Listen as the water speaks and tells a story bold.” After completing the trailer, you’ll realize that is not an overstatement. The story of the Gallia County town along the Ohio River is one that contains many surprises along with mystery, tragedy and triumph. 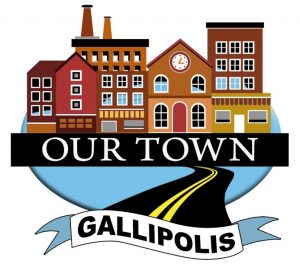 “As we are meeting people in Gallipolis and conducting our research, we are learning so many things about Gallipolis that I don’t think many people know,” said Our Town Producer/Director Evan Shaw. “There are several connections that people who were from Gallipolis have with some of the biggest events and people in history. I’m super excited about the new trailer and can’t wait to share the completed documentary with the community, the region and the entire state.”

The nearly two-minute trailer, which was released today, (Wednesday, October 23) is a glimpse of what viewers will see when the documentary debuts in March 2020.  The film will reveal little known items about Gallipolis as well as examine many other unique aspects and people including: the formation of the Ohio River, the Battle of Point Pleasant, and the Silver Bridge disaster, along with some of its more notable residents like Bob Evans and Grandma Gatewood.

“I grew up in Southeastern Ohio and thought I knew most everything there was to know about this region’s history, but every time we start a new Our Town, I learn a few things that blow my mind. That’s what I love about doing these documentaries and telling the story of this region,” said Shaw.

Shaw is a 13-time Emmy-Award winner. Previously highlighted communities in the Our Town series include Lancaster, Pomeroy, Nelsonville, Jackson, Athens, and Morgan County.

Our Town: Gallipolis will premiere at a free public screening in Gallipolis in March 22, 2020 at Gallia Academy at 3 p.m.