ATHENS, OH — It’s been over 8,600 days since Jeff Boals was a part of an Ohio team that put a notch in the win column at the Convocation Center. That day way March 2, 1996, when Boals was a graduate assistant coach at his alma mater.

For the 16th consecutive season, the ‘Cats (2-0) won their home opener and did it in dominating a fashion. They were able to overcome slow starts to both halves to dominate Division III Heidelberg, winning 88-50 on Saturday afternoon in the Convo.

“Our ability to respond to the slow starts in both halves was pretty good. We picked up the energy level on both ends,” Boal said. “I was impressed with the way we shared the basketball, I thought we were making the right play for the most part.”

The Bobcats’ ability to move the ball was consistent for the entire game, registering 25 assists on 31 made baskets for the afternoon. Leading the way in that department was sophomore point guard Jason Preston, who finished with 11 assists. He now has 24 assists in his first two games compared to just five turnovers.

“(Jason) sets the tone. We really stress in practice that when we move the basketball, our scoring goes up,” Boals said. “With Jason out there…he’s going to find you. You have to be shot ready.”

Preston also added a career-high 16 points and 7 rebounds to his assist total on the day.

“Coach Boals is giving me and the whole team a lot of freedom within the offensive sets,” Preston said. “Coach Boals makes it easy.”

It certainly looked easy out there at times for the Bobcats. Four players finished the game in double figures, being led by Ben Vander Plas with a game-high 18 points. Ohio also shot 50.8 percent from the field, including a 13-for-27 performance from beyond the arch. 13 is the most threes the ‘Cats have made in a game since February of 2018, 37 games ago.

Of those 13 triples, eight of them were made by forwards and centers.

“We have confidence in (the big guys) shooting it. When our bigs pick and pop or (Jason) gets downhill and draws defenders, we want them to shoot that,” Boals said. 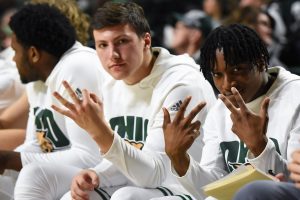 Redshirt freshman forward Mason McMurray hit his first three-pointers of the season against the Student Princes, going 3-of-4 from deep, leading to a career-high nine points. Vander Plas and Jordan Dartis also hit a trio of threes on the afternoon.

“Those guys have been ready. They’ve been getting in the gym and getting up shots,” Preston said. “Guys are ready to shoot and they’re knocking them down.”

Saturday was the first home game for the Bobcats in the 2019-20 campaign, but it is also their only home game in the next three weeks. On Tuesday, they begin a road

trip sees them play each of their next five games on the road. That stretch includes trips to No. 10 Villanova and three games in Myrtle Beach, SC where they’ll face No. 16 Baylor.

It’s a difficult and important stretch for a young Bobcats team that has to continue to learn how to win and how to play teams with much more talent than they have.

“From day one, we’ve really talked about being in the moment. We have to keep getting better,” Boals said. “On Monday, we have to come in and prepare for an Iona team that went to the NCAA tournament.”

“It’s going to be a great challenge for us,” Boals added.

The ‘Cats are right back at it on Tuesday when they travel to New Rochelle, NY to take on the Gaels of Iona, who went to the Tournament last season as the champions of the Metro Atlantic Athletic Conference.

It will be another early-season test for Ohio.

Ohio Men’s Basketball: ‘Cats Run Out of Gas in Loss to Purdue