ATHENS, OH — Nathan Rourke and Cole Baker sat in a meeting room on the second floor of Peden Stadium taking questions from the media. When Senior Night was brought up as a question, Rourke looked up, obviously upset, and stared off into the distance before bowing his head back down and nodding towards Baker to answer.

The senior quarterback had just watched as Western Michigan scored a game-winning touchdown in overtime to spoil his final game in his home stadium and, understandably, couldn’t find the words to describe the disappointment.

The Bobcats (4-6, 3-3 MAC) lost a game they absolutely had to win despite scoring 34 points in the second half, throwing yet another season of Ohio football into the realm of bitter disappointment as they fell to the Broncos (6-4, 4-2 MAC) 37-34 on Tuesday night.

“These games are harder to swallow when you know that you’re right there. I thought we were in every game (that we lost) and we just didn’t put our best foot forward,” Rourke said. “We haven’t ben able to put together a complete game.”

In all of the Bobcats’ losses in the MAC this season, they have lost by just 3 points. Two of those losses, including Tuesday night’s loss, came on the final play. All of those losses also came in Peden Stadium.

“We just did not put it all together team-wise (this season),” Ohio head coach Frank Solich said.

A long-running thread in the 2019 season has been the Bobcats’ inability to sync up good performances on both sides of the ball. That trend reared its ugly head again against Western Michigan.

In the first half, Ohio ran just 15 plays on offense totaling only 56 yards. If it weren’t for the defense holding the Broncos to just 10 points despite them racking up over 200 yards of offense on 48 plays in their 21 minutes of first-half possession, the game could have been out of reach by half time.

“We couldn’t get a first down. It’s tough to put into words,” Rourke said. “We just weren’t executing.”

With the offense struggling, the Bobcats defense twice held the Broncos out of the end zone in goal-to-go situations in the first half. The first time, Western hit a short field goal, the second time they missed one. 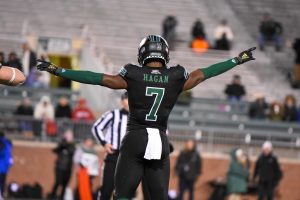 The Broncos lone touchdown drive of the first half came late in the second quarter following a Bobcats’ muffed punt near midfield. Prior to the punt, the Bobcats had forced a three and out with Western Michigan backed up deep in their own end.

Offensively, the ‘Cats had just three meaningful possessions in the first half. Only one lasted longer than three plays.

“I think our mentality was ‘we want to beat these guys and get out’ and that’s not the right mentality to have to beat a team the caliber of Western Michigan,” Rourke added. “We changed that in the second half, that’s what we should have brought in the first half and that falls on our shoulders as leaders.”

For all their flaws in the first half, the Bobcats were an entirely different team on offense in the second half.

On their first drive of the third quarter, the ‘Cats went 74 yards in just 3:34 to score their first touchdown of the game.

The score was an incredible toe-tap touchdown catch by Ryan Luerhman from Nathan Rourke. The touchdown was Rourke’s 100th as a Bobcat, the first player in program history to ever reach triple digits in total touchdowns.

After a quick three and out by the Broncos, the Bobcats went right down the field again and took the lead on a 10-yard run by De’Montre Tuggle.

After just 16 plays and 6:06 seconds of possession, the Bobcats had more than tripled their first-half offensive output.

“That’s been part of our problem as we’ve gone through the year,” Solich said. “We’ve shown flashes, but the consistency is not there.”

After forcing two WMU punts to start the third, the ‘Cats gave up back-to-back-to-back touchdown drives. The first two of those covered 137 yards on just nine plays and took just a total of 2:40.

Even with the Bobcat offense putting up 34 points and racking up 385 yards in the second half and overtime, they were playing from behind for much of the second half.

After falling behind 17-14 with three minutes to play in the third quarter, Rourke led the Bobcats offense down the field to tie the Broncos three separate times.

The final and most dramatic time came in the final minute when he drove his team 53 yards to score a game-tying touchdown on a lob pass to Tyler Tupa with just nine seconds to play in regulation.

The ‘Cats started overtime with the ball and gained just five yards before settling for a Louis Zervos 37-yard field goal to take a brief 34-31 lead.

In the overtime period, the Bobcats elected to run the ball on 3rd and 5 instead of using the air attack that had gotten them in overtime in the first place.

“I’m not going to mess with talking about playcalling,” Rourke said. “My job is to execute the play that is given to me.” 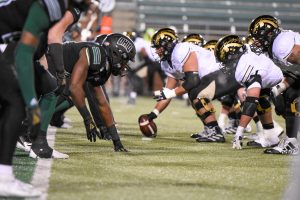 The mark mathematically eliminates the Bobcats from winning the MAC East, marking a third straight season without a trip to Detroit despite arguably being the best team in the conference for two of those three seasons.

In the preseason, they were picked unanimously by the media to win their division, adding another level of disappointment for the team and their fans.

“Obviously, we expected more out of this season,” Solich said. “We’ve got two games to go and we plan on winning those two games.”

Those last two games are all that stands between a disappointing season and an utter disaster. A loss in either game would mean the Bobcats would not only not be going to Detroit, but they would also finish the season without being eligible to go to a bowl game.

The first step in averting that disaster would be a win next Tuesday night over a 3-6 Bowling Green team.

Kickoff for that game is scheduled for 7:30 p.m. at Doyt L. Perry Stadium.

Ohio Football: 3 Takeaways from the Bobcats Loss to Northern Illinois

Ohio Football: 3 Takeaways From the Bobcats’ Loss to Pitt