AKRON, OH — Nathan Rourke took the snap and rolled right looking for an open receiver at the goal line. There wasn’t one, so he tucked the ball and sprinted to the pylon.

He dove just inside it for the 1-yard score, but it wasn’t the touchdown that, ultimately, was significant.

That play, should Ohio be denied a bowl bid, could be the quarterback’s final play as a Bobcat.

“We went into this game thinking that we have to control what we can control and take care of business here tonight,” Rourke said. “I think we did that.”

Both sides of the ball did more than take care of business against the Zips. The offense racked up over 600 yards for the second consecutive week and the defense held Akron to just 74 total yards for the game.

Rourke was the catalyst for the offense. He topped 300 yards passing for the second time in his career tonight, going 20-of-28 for 308 yards and four touchdowns while adding 37 yards and a score on the ground.

“He’s so special. From the moment he stepped on our campus, he exuded the kind of leadership that you want and you knew that there was something special about him,” Ohio head coach Frank Solich said. “As you go through season after season and put up the numbers that he did, I’m so proud of him.” 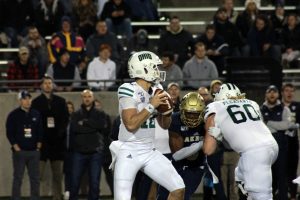 With the Bobcats taking until the final week of the season to become bowl eligible, no one surrounding the team quite knows what comes next.

“We’ll just have to wait and see. It was not an easy season. We were in ball games that came down to the last drive, the last kick and we were on the wrong side of a few too many of those,” Solich said. “I think in terms of bowls looking at us, I think we’ve got a strong offense and our defense is starting to play really strong.”

“But it’s certainly not in our hands,” he added.

Ohio is bowl eligible for the 11th consecutive season, but they are the seventh MAC team to reach six wins, so space could be limited for the ‘Cats to receive an invite.

“Obviously, I want to play again. This has been a great group to play with and I’d love to get one more shot out there,” Rourke said. “Bowl experiences are really fun. I’ve had the opportunity to go to two of them and I’d love to make it three.”

“If it happens, it happens. If it doesn’t, everything happens for a reason,” he added.

If this is the last game for the Bobcats in 2019, they certainly went out with a bang. Six different players found the end zone on the night, including one that hadn’t been there in almost two years.

On the first play of Ohio’s second possession, Rourke faked an option play to the right, pulled back and fired to a wide-open D.L. Knock downfield. The special teams ace caught the pass, made a few guys miss and ran into the end zone for just his second career offensive touchdown and his first since the Bahamas Bowl in 2017. 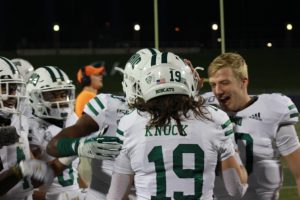 “It was awesome. D.L. He is such a team-oriented guy. He does all the little things,” Rourke said. “He’s one of my favorite guys on the team. I’m really happy for him.”

Shane Hooks also was the benefactor of a pair of long touchdown tosses from Rourke in the game. He finished with five receptions for 81 yards.

Ohio also had a couple of running backs find the end zone as well. O’Shaan Allison finished the game with 71 yards and a score on just seven carries and Ja’Vahri Portis score the game’s final points with a 3-yard run late in the fourth. 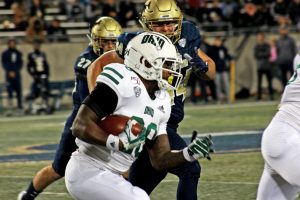 De’Montre Tuggle led the team in rushing with 78 yards on just nine carries.

In their final two regular season games, the Bobcats rang up and incredible 118 points and 1,212 yards.

“These past two weeks have been some of the most fun of my career,” Pleasants said. “We’ve been able to control and dominate games.”

The defense got to join in on that fun Tuesday night, holding Akron to just 74 yards of offense. It is the first time in the Solich era that a Bobcat defense was able to hold the opponent under 100 yards of total offense in a game.

The Zips had zero passing yards in the second half and completed just four of their 27 pass attempts over the entire game. The Bobcats force the Zips to go three-and-out on half of their possessions in the game, including a stretch of six in a row spanning the second and third quarter.

But none of that matters beyond tonight. The Bobcats will spend roughly 12 days wondering if the final two weeks of their season impressed enough to earn themselves a trip to the postseason.

“I never really looked at this one as a ‘last game’,” Rourke said. “I’m going to be optimistic until we find out, but I think at this point, we’ve made a pretty good case for ourselves.”

Regardless of how anyone else feels, Solich likes how his team has played to close the season.

“I’d be glad to take them anywhere and play anybody,” he added.

As of the end of the night on Tuesday, there are 73 teams in FBS with six or more wins. There are a total of 78 spots to be filled in all 39 bowl games.

Given how this season of Bobcats football has gone, at least they have a shot at being one of 78.

But now, we wait.