For generations, The Nutcracker has been a holiday tradition for audiences of all ages. In 2016, Chicago’s Joffrey Ballet gave the work an ingenious makeover and a fresh new setting: the fairgrounds of Chicago’s 1893 World’s Columbian Exposition. Produced by WTTW and the Joffrey Ballet, the documentary Making a New American NUTCRACKER goes behind the scenes to reveal the inspiration for this new Nutcracker and introduces audiences to the creative talents who made it happen. The film is produced by Daniel Andries and narrated by Neve Campbell (Mad Men, House of Cards), who was also co-producer, co-writer and star of The Company, Robert Altman’s film about the Joffrey Ballet. 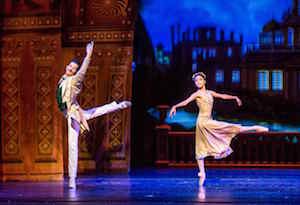 To create this new version of Tchaikovsky’s beloved classic, Joffrey Ballet artistic director Ashley Wheater gathered a stellar group of theatre artists — Tony Award®-winning choreographer Christopher Wheeldon; Caldecott Medal-winning author Brian Selznick, writer of the book that inspired the Oscar-winning film Hugo; MacArthur ‘Genius Grant’ recipient, puppeteer Basil Twist; Tony Award®-nominated scenic designer Julian Crouch; and Tony Award®-winning lighting designer Natasha Katz — to re-imagine the story of Clara, the privileged daughter of a 19th-century German merchant who falls asleep on Christmas Eve and dreams of a world of sweets. In this daring new production, Clara has been transformed into Marie, the daughter of a 19th-century Polish immigrant — a single mother working on a statue for the World’s Fair — who falls asleep on Christmas Eve and dreams of a completed and wondrous fairground.

Making a New American NUTCRACKER takes audiences behind the scenes with the dancers and creative visionaries as they bring this strikingly original production to life and transform this European import into a magical and very American story. They share anecdotes about the process — including how Buffalo Bill came to be part of the ballet; why the dancer who portrays the Nutcracker has to play his part mostly blind; choreographer Wheeldon’s observation that one part of Tchaikovsky’s score is reminiscent of an iconic TV theme song; the salty advice Wheeldon received from Chicago’s mayor, Rahm Emanuel, a former dancer himself who is interviewed in the film — and relate their first experiences either seeing or performing in The Nutcracker. 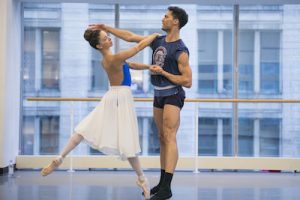 “The inaugural season of Christopher Wheeldon’s The Nutcracker was enjoyed by thousands in attendance at Chicago’s Auditorium Theatre last winter,” said Wheater. “We’re very pleased to now have the opportunity to share his labor of love and the story of its creation with audiences everywhere.” 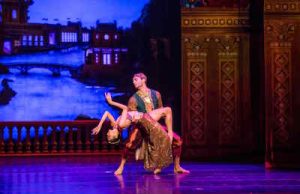 UTCRACKER is made possible through the generosity of The Grainger Foundation of Lake Forest, Illinois.

About The Joffrey Ballet
The Joffrey Ballet is a world-class, Chicago-based ballet company and dance education organization committed to artistic excellence and innovation, presenting a unique repertoire encompassing masterpieces of the past and cutting-edge works. The Joffrey is committed to providing arts education and accessible dance training through its Joffrey Academy of Dance and Community Engagement programs. Connect with the Joffrey on Facebook, Twitter and Instagram.