More than one trillion dollars. That is the current student loan debt in America. Higher than auto loan and credit card debt, and the massive figure is only on the rise.

Since the 2008 recession student debt has more than doubled in America. 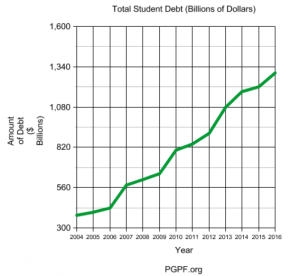 College students today expect to take out loans and graduate in debt. While some politicians are calling for the cancellation of all student debt, others do not believe the idea will work.

Dr. Richard Vedder is a professor of economics at Ohio University, he says that the idea of cancelling all student debt is poorly thought out.

“I think it would be very irresponsible,” says Vedder. “What about the people who paid off their debt, wouldn’t they be a little annoyed when someone with a $40,000 debt or a $60,000 debt gets told ‘oh you don’t owe the money anymore’?”

The average American student has around $40,000 in student loan debt — but while student debt is hitting all-time highs with no sign of slowing down, there are still affordable options for students to receive an education or job training after high school. For some students, one of those options means service to their country.

Many schools across America have an ROTC program, in which students sign a commitment to serve in the military and then the military pays for their education.  In the programs students will study at a university for four years before fulfilling three to four years of service in the Army, Air Force, Navy or National Guard.

The director of the R-O-T-C program at Ohio University, John Hensen, says that joining R-O-T-C is more than just getting free college, it’s about a commitment to the military.

“All the services have some sort of pay for college plan,” Says Hensen.  “You can either do it while you’re in service or after service.  What I do, is I’m a recruiter for Army ROTC, which is a little different, because it starts with college, where you are going as a college student.  And as part of your college training you’re learning how to be an officer.  And so your Army career doesn’t really start until you’ve graduated from college.”

But being eligible for subsidized schooling through ROTC comes with responsibility. Hensen says students not only need to maintain a GPA requirement, but must stay in good physical and mental shape as well.

If you are not a part of the small population who can pay for their college education with military service, for Ohioans, completing some of your studies while you’re still in high school is another option.

College Credit Plus and Branch Campuses

Since 2014, Ohio middle and high school students have been able to enroll in college classes starting in the seventh grade.

Maddy Craig is a senior at Ohio University, but has only attended for two years. She completed her first two years of college at Ohio University’s Lancaster campus while she was still a high-school student, as a part of the state’s College Credit Plus program.

And while a growing number of students like Craig are now able to get a head start in their higher education, she says another plus to the program was how it prepared her to leave high school.

“It was an easy adjustment just because when I was in high school I was already working with college students, so honestly, getting here I just felt more comfortable.”

One full year of tuition, room and board at Ohio University with no financial aid or scholarships cost nearly than $30,000 if you live in Ohio — that brings the cost to more than $120,000 for four years for the class of 2023.  The Ohio University Guarantee program keeps tuition the same for a student’s four years, but increases it for each incoming freshmen class.

Students enrolled in College Credit Plus have the opportunity to cut that in half, only paying college tuition for two years instead of four because the college credits taken in high school are free to the student.

“It’s made it much easier on me and my family and I think it’s a great way to prevent students from going into more debt than they’ll already be in,” Craig said.

Another way students save money on their college education is by attending either a branch campus or a community college for all or part of their degree.

Students who attend a regional campus of Ohio University can easily transfer credits to the main campus at a lower cost, and without having to pay for room and board.

In-state tuition and fees at branch campuses for Ohio University typically cost about $5,000 a year, compared to $12,612 in-state students pay at the Athens campus.

Candice Thomas-Maddox is a professor of Communications at the Lancaster Campus of Ohio University, and sees the benefits of spending some time at a regional campus.

“There is a lower faculty-student ratio… tuition is approximately 40% [of the cost of] the classes you would take at the Athens campus.”

And while the cost for higher education is considerably less at branch campuses, according to Maddox, the level of education stays the same.

“The diploma still says Ohio University,” Says Maddox.  “the curriculum is the exact same as the curriculum followed by the main campus.”

Other public universities, such as Kent State, offer similar deals.

Dr. Andy Burns is a professor of Chemistry at Kent State Stark, and believes the branch campus offers a quality education at a more affordable price.

“You have good professors, we offer a lot of majors at our campus.  There are no dorms and stuff, so it’s cheaper.”

Vocational schools are another alternative to a traditional four-year degree. At schools like the Tri-County Career Center in Nelsonville, Ohio, students can train for skilled trades and get into the workforce immediately.

Kelly Leffler is the Adult Education Director at the Tri-County Career Center, and says the center offers plenty of career paths that can get students right into the workforce.

“We offer over a dozen different career paths — we’ll teach students things like welding, plumbing, cosmetology and plenty of other skills needed for their desired profession.”

According to Leffler many students attending the center don’t pay a dime in tuition.

“Most of our students who come through here are eligible for Job and Family Services money.  Through TANF [temporary assistance to needy families], WIOA [workforce investment opportunity act] money … So they can come through our program and get most of it paid for by those agencies and not have to pay out of pocket for that.  So there’s great opportunities in the area for young folks trying to make their life better.”

Without the burden of debt, students who complete their time at the Tri-County Career Center are able to enter the workforce immediately after receiving hands-on training.

While many American students are still leaving high school without a plan for the future — there are more affordable options available every day.  As student loan debt continues to rise with no  immediate solution in sight, students and parents are considering all paths to receive a more affordable education.