ATHENS, OH – As chief video engineer at New World Symphony in Miami Beach, Florida, former WOUB student and Ohio University graduate Dan Slentz helped design and put together one of the largest Ultra High Definition production facilities under one roof in the United States. It’s an experience that Slentz believes would not have been possible without the opportunities he got in Athens.

“Ohio University does something very unique,” said Slentz. “There is no reason a student in communications should graduate without enough experience to land a job. Whatever you want to do, it’s yours to do in Athens. They don’t make it difficult to do whatever you want to do. WOUB taught me a whole different level of professionalism. The Ohio University professors and the WOUB employees are the best at what they do. What they taught me was a real high-level of pro 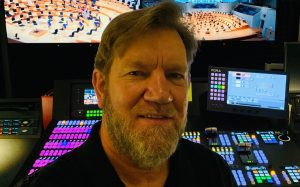 fessionalism, and I have taken that with me.”

The New World Symphony (NWS) is an orchestral academy that prepares graduates of music programs for leadership roles in classical music. NWS Fellows take advantage of the innovative, state-of-the-art facilities to launch their careers.

Slentz originally came to Ohio University in the early 1980s. After running into some financial difficulty, he had to leave Athens without completing his degree. But, after some time working in Armed Forces Radio and TV and serving in the Air Force, Slentz knew there was unfinished business in Athens.  He returned in 1996 and completed his Bachelor of Science in Communications. Slentz worked for WOUB during both of his stints at Ohio University.

“At WOUB, I was used for voiceovers on television, announced bluegrass on the radio, wrote scripts and worked in TV master control,” said Slentz. “I wore a lot of hats at WOUB, and I loved all of it.”

Slentz has had many different roles throughout his career as well. He’s worked as a radio announcer and jockey, TV news anchor, radio and TV engineer, audio visual manager and vice president of technology.

“I regularly write for Radio World magazine and contribute to TV Technology magazine,” said Slentz. “It all started though at Ohio University. It was a nurturing situation and that’s what makes Ohio University so different. It’s education from a great university with the hands-on experience. It’s really everything you need to be successful.”