ATHENS, OH – As Chicago Bulls Radio Play-by-Play Announcer Chuck Swirsky gets ready to watch tonight’s NCAA National Championship Game where LSU will play Clemson, he can’t help but be filled with pride and thankful that his time as a student sports reporter and anchor at WOUB Public Media gave him such an appreciation and connection to one of the players on the field. LSU Quarterback Joe Burrow is from The Plains and graduated from Athens High School. 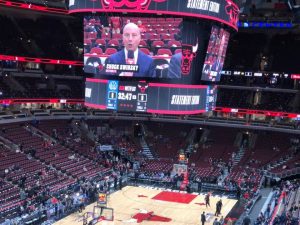 “Burrow is a quality a young man and to hear him speak from the heart when he won the Heisman, I was so thrilled and impressed that he would use that platform to talk about others instead of himself. You could see his desire to have a better world in southeastern Ohio,” said Swirsky. “I have watched his acceptance speech four or five times because it resonated with me in different layers. I’ve walked the grounds that he walked on; a couple of generations removed. I was there and know the people, and I love that area. I know that the community is a giving hardworking community, and they do their very best. When he spoke of southeastern Ohio, I was right there with him. To know that he walked the halls of Athens High School, I’ll always be connected because of the position and platform WOUB gave me.”

Swirsky graduated from Ohio University in 1976 with a degree in Interpersonal Communication.  He came to Athens in 1972 from Seattle, Washington. Athens was a long way from home but the 18-year-old, who had wanted to become a sports reporter since the age of five, knew Ohio University and WOUB were where he needed to be.

“The summer before my senior year in high school, I visited Ohio University, and I went up to WOUB. I was amazed at not only the ability of those willing to lend a hand but the equipment they had and the ability for students to get involved from day one, which was extremely important. I knew I would be able to use the practical exper 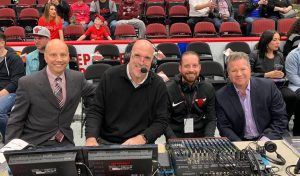 iences I gained at WOUB to take things to the next level,” said Swirsky. “One thing led to another, and I fell in love. Southeast Ohio is gorgeous. I loved the rolling hills. It was so beautiful. I was hooked.”

Swirksy took advantage of all the opportunities WOUB offered to learn his craft. He spent a most of his time outside of the classroom at WOUB.

“You know how they call people who go to the gym all the time a ‘gym rat’? I was that at WOUB. I was locked in with WOUB 24/7,” said Swirsky. “I was doing sportscasts, sports interviews and anchoring Newswatch. I did everything because it was important to me for my growth, and I gained a great deal of confidence going out into the real world.”

After Swirsky graduated, he worked in sports radio in Columbus and later in Chicago. Swirsky rose to prominence while serving as the sports director for WGN-AM in Chicago from 1982-1994. He was the host of the Chicago Bears Radio Network for 10 years and held similar responsibilities for the Chicago Cubs Radio Network for 12 seasons. He eventually got a job doing play by play for the University of Michigan basketball program. Then, Swirsky moved to the NBA, first for the Toronto Raptors and now for the Chicago Bulls.

“If somebody told me when I was going up to WOUB at age 18 that my career would take me here, I wouldn’t have believed it,” said Swirsky. “I can still see myself in the WOUB newsroom using a typewriter. We had eight track cartridges that had audio on them. We had cassettes and phones to tape interviews. Looking back at those days and knowing what I know now, I can honestly tell you that without that time in my life, I wouldn’t be here today.”

Swirsky knows he will think back on that time this evening as he watches Burrow take the field in the biggest college football game of the year. He will think fondly of the times he covered Burrow’s high school and the many others throughout the southeast Ohio region, knowing that just like Burrow, he loves the place and owes so much to what he learned there.

“Covering the Athens Bulldogs football on a Friday night, I gained the confidence to do interviews and report stories. After that, you’re able to cover games in Peden Stadium at Ohio University and then anywhere,” said Swirsky. “The moment I got on the air at WOUB, I knew that it came with accountability and responsibility, and WOUB taught me that.”