ATHENS, OH – It’s been nearly 50 years since Bruce Goldberg graduated from Ohio University. During that time, he had a wonderful career working in marketing and communications in the transportation industry, but there’s always been that nagging “what might’ve been” and one place he’s never been able to forget: WOUB Public Media.

“I transferred to Ohio University in the fall of 1969 after spending one year at Rutgers University in New Jersey,” said Goldberg. “I was studying print journalism there but learned during that year that broadcast was where I truly wanted to be. There was no broadcast journalism program at Rutgers, and when I heard about Ohio University’s program, I decided that was where I should be starting my sophomore year.”

After Goldberg took up residence in Athens, he started volunteering at WOUB. Goldberg wrote copy in the WOUB newsroom, anchored newscasts on WOUB AM and FM and did both news and sports on WOUB-TV’s nightly newscast.

“My most memorable moment was living my dream of doing radio play-by-play for an Ohio Bobcat baseball game in 1970 with future major league Hall of Famer Mike Schmidt as the Bobcats’ shortstop,” said Goldberg. “After doing that game, I knew that I’d better not count on a play-by-play career. I was not as polished as I had hoped to be, and I didn’t really get another chance to work on it.”

You see it was the spring of 1970 and that was the year Ohio University closed due to the May 4 shootings at Kent State University.

“When I came back in the fall, there was no opportunity to do baseball, as the season was over,” said Goldberg. “And in the spring of 1971, I was focused on finishing up my college career and graduating that December. I knew if I wanted to follow my baseball announcer dream that I needed to get a job in broadcasting and work on getting better.”

Goldberg graduated with a Bachelor of Science in Communication and got a part-time job at WJLK radio in Asbury Park, New Jersey. But that’s when Goldberg’s path went in a different direction. 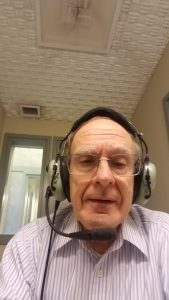 “Growing up, I had always been interested in trains and planes,” said Goldberg. “When I was coming back to New Jersey on the train from a job interview, I sat down across the aisle from someone looking at Allegheny Airlines marketing brochures. I asked the man whether he was with Allegheny. He wasn’t, but he was the vice-president of marketing for Amtrak. After a two-and-a-half-hour de facto job interview, I soon found myself working for the new nationwide railroad. This began a four-decade career in the transportation industry, with much of it spent doing marketing at Amtrak, US Airways and Greyhound, as well as working at the U.S. Department of Transportation.”

Even though Goldberg thoroughly enjoyed his career, the broadcast bug never completely left him.

“I guess when you end up changing directions, whether you’re talking about your career or anything in life, sometimes you’re going to wonder what if? What if at that fork in the road, I had taken the other fork?”

When Goldberg retired, he decided to find out. He learned there was a place he could use the skills he learned at WOUB and provide a wonderful service for his community. For the last three years Goldberg has volunteered at The Metropolitan Washington Ear, a charitable organization that uses volunteers to read and record stories daily from the Washington Post, USA Today, Wall Street Journal and other local publications for the benefit of the blind and visually impaired who want to read the newspaper but are physically unable.

“The first time I went in there, closed the broadcast booth door behind me and put on the headset, my mind immediately flashed back to those couple of wonderful years I spent at WOUB,” said Goldberg. “To do be doing this for a charitable purpose makes it especially sweet and meaningful. I’m giving back to others, and in a way, I feel like I’ve come full circle, back to those days when I felt like WOUB was a glimpse of what my future would hold.”

Now that Goldberg is back in the broadcast booth, he only has one more thing to complete from his past nagging at him.

“Since I graduated from Ohio University in the middle of the school year, and immediately started working, I never got to walk at graduation,” said Goldberg. “My hope is to convince someone at the college to let me walk in graduation in December of 2021, 50 years after I should have walked in 1971.”