ATHENS, OH – When 29-year-old Tyler Wend of Buchtel, Ohio started working at WOUB Public Media in November of 2014, he didn’t know what he wanted to do with his life.  Wend had earned an associate degree in digital game design and a degree in broadcast engineering from a local college but realized that wasn’t the right career path for him. He started working as a part-time master control operator at WOUB and was trying to figure out what was next when he saw all of the opportunities available to Ohio University students to gain real-world, on-the-job experience at WOUB while they were earning their degree.

“The students were getting great opportunities to try different things out in media by volunteering at WOUB, and I realized I wanted to do that,” said Wend.

Wend decided to enroll at Ohio University to pursue a bachelor’s degree in integrated media, gave up his part-time master control position and started volunteering as a student at WOUB. 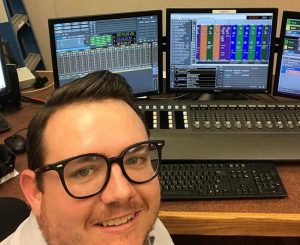 Through his directing work, Wend was trained on the Ignite Automation Production Control platform used at WOUB. The Ignite system enables a single operator to program the technical operations of a live broadcast.

“Automated production is the direction the industry is going in. It lowers production costs making it where many tasks can be easily performed by one person which used to require a group of people, and it reduces the number of errors seen during live broadcasts,” said Wend.

When Wend graduated in 2018, he was a hot commodity in the job market. 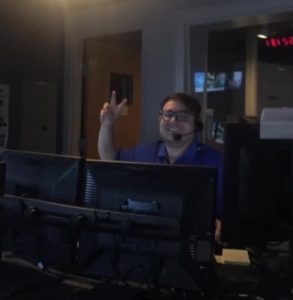 “Around graduation time each year, I start getting calls from directors and managers at television stations around the country asking for graduates with specific talents,” said WOUB General Manager Mark Brewer. “When Tyler graduated, I got a call from a station in Savannah, Georgia looking for a graduate who could run the Ignite system.  I connected Tyler with the station manager, and Tyler graduated with a job already lined up.”

“If it wasn’t for WOUB and learning Ignite, it would have been harder for me to get a job. I worked with WOUB engineers and learned how to build and code the Ignite system. Ignite is where everything is going,” said Wend. “Big city markets are going automated. ESPN is starting to use Ignite in a few studios. Media companies are looking for those who know understand systems like Ignite so programs can be automated. WOUB put me on the right track. As a student at WOUB, it’s all based on what you put in. Everything you put in; you get right back. You become part of a family of former WOUB students that branches over generations.”

After spending a year as the Ignite director and managing the live productions of local high school football games in Savannah, Wend was hired by Ross Mobile Productions (RMP) as a remote operations coordinator.  The international mobile production company offers full-service production packages and rental services. RMP delivers high-quality, network-level productions to meet consumer demand for coverage of many sports networks and other live events across the country.

“We work with organizations like ESPN and Golden Boy Boxing Promotions. As remote operations coordinator, I work in Florida and provide crew for any productions we are working on in the state. I also do pre-operations work, making sure everything we need is taken care of before a particular game or production,” said Wend. “I love my job and am truly thankful for everything I learned at WOUB that got me to where I am today.”