China’s former one-child policy has resulted in a severe demographic imbalance, a country that today has 30 million more men than women. Facing pressure from a government that approaches this ratio as a threat to social stability, and receiving scrutiny from parents who believe that only marriage will create lifelong security for their daughters, unmarried young women in China grapple with these realities, their own goals, and being labeled with the derogatory term that gives the film its name: “sheng nu” or Leftover Women. 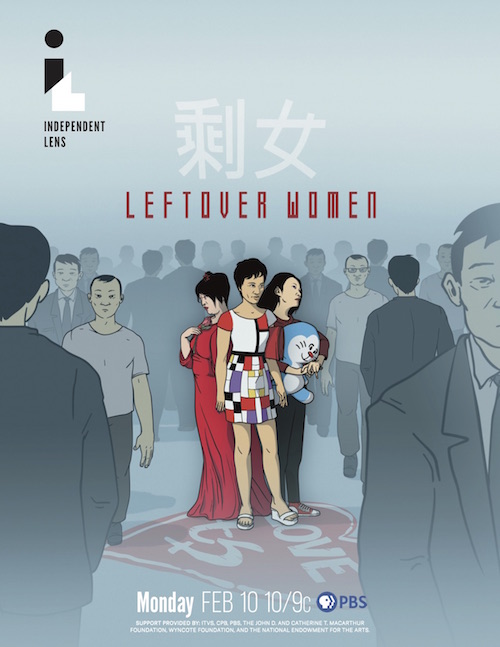 With the personal stories of three women, award- winning filmmakers Shosh Shlam and Hilla Medalia provide intimate access to experiences with dating and family, and incorporate themes of sexism and societal change, into the documentary premiering on Independent Lens Monday, February 10, 2020, 10:00- 11:00 PM on WOUB, PBS.org and the PBS Video App.

Leftover Women explores one facet of a social reality addressed in-depth by Independent Lens programming this season: the ramifications of the former one-child policy. The acclaimed documentary One Child Nation, airing in March, outlines the history and propaganda behind the massive gender imbalance that so-called “leftover women” grapple with today.

In China, as single women search for “Mr. Right,” they struggle to stay true to their personal and professional ambitions amid pressure from their families, friends, and a government that launched a state-sponsored campaign to stigmatize unwed women. Leftover Women follows three successful women — Qiu Hua Mei, a lawyer; Xu Min, who works in public radio; and Gai Qi, an assistant college professor — who, despite thriving careers, are labeled “leftover women” or educated, professional women in their mid-20s and ’30s who are not married.

Xu Min’s parents spend their weekends at “marriage markets” looking for viable candidates. The eldest of the three women, Gai Qi challenges traditional views of relationships and marriage, and faces disapproval from a partner’s parents because of her age. Meanwhile, lawyer Qiu Hua Mei was the first in her village to get an education, yet her family sees her as a failure, and her pursuit of a partner seems futile after a crushing interview with a dating counselor suggests she lower her standards. Their individual challenges expose fault lines within families, and touch on virtually universal truths about realities and attitudes faced by women worldwide.

The documentary premiered at the Tribeca Film Festival and received awards from the Philadelphia Film Festival, EBS International Documentary Festival Seul and DocAviv. Leftover Women explores long-standing societal ideas around women, marriage, and family that reflect traditions and expectations not only in China, but also around the world.

Visit the Leftover Women page on Independent Lens for more information about the film, and follow the hashtag #LeftoverWomenFilmPBS for discussion on Twitter.