You’ve heard of a match made in heaven. But, did you know there’s such a thing as a match made at WOUB Public Media? Justin and Kimberly Feldkamp are a prime example. 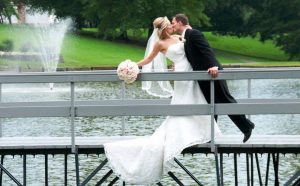 “Justin and I both started as students at Ohio University at the same time,” said Kimberly. “We both lived on West Green and found out we attended rival high schools in Cincinnati. We were also both journalism majors who started working on the high school football show Gridiron Glory at WOUB. So, we started spending more time together.”

“I would stop by her dorm room and we would walk up together to WOUB on Friday nights for Gridiron Glory,” said Justin. “One thing led to another.”

“The time spent together at WOUB was really important to our relationship growing,” said Kimberly. “We had a common interest which was a passion for news and storytelling. Who knows where we would be today If we didn’t walk up to Gridiron Glory together?”

Justin and Kimberly started working at WOUB in 2001. Justin always had an interest in sports reporting and knew he wanted to be a sports broadcaster.

“I had grown up playing baseball, basketball, football, tennis and golf,” said Justin. “It was something I really enjoyed. Once I realized I wasn’t going to be a second baseman for the Cincinnati Reds, I wanted to do the next best thing which was to cover sports for a living.”

Kimberly also was interested in sports which was why she started working on Gridiron Glory. But she quickly learned that it really wasn’t her thing.

“I didn’t like calling highlights, so I got out of sports,” said Kimberly. “Justin took the sports path, and I went into anchoring and producing WOUB’s nightly half-hour news program Newswatch.”

Even though they were now doing different things, the two still bonded over what they were learning at WOUB.

“I think the thing was that we could give each other pointers and help each other,” said Kimberly. “I really think when you date someone in TV, it helps you understand that if you are going to be with this person, it can be really challenging. The TV schedule can be difficult. But we both had an understanding.”

Justin is currently the sports director at WTVG in Toledo, Ohio. Kimberly worked in Lima, Ohio and Roanoke, Virginia as a reporter, anchor and producer before moving into public relations and marketing. 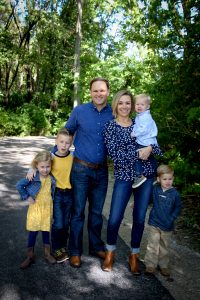 Justin and Kimberly got married in 2009 and are the parents of four children. Both look back on their time at WOUB fondly, not just because that’s where they met each other, but because it was also the place they learned the tools to launch successful careers.

“The hands-on experience you got at WOUB, you got to do everything,” said Kimberly. “You got to put on a newscast and do all aspects of it. Everybody had to work together to get the job done.”

“I would encourage current students to get involved as early as possible and take advantage of all the opportunities,” said Justin. “Get involved with podcasts, radio interviews and social media. You can apply different skills and take a portion of your skills from one medium and apply it to others to enhance your work.”

While they can’t promise you’ll meet your future spouse, Justin and Kimberly aren’t the only people to have fallen in love at WOUB or in a newsroom.

“That happens a lot in TV,” said Justin. “I guess maybe it’s just the shared interest, obviously some type of attraction and being in close proximity. It worked for us.”