ATHENS (WOUB) – Right now the roof connected to the third floor of Schoonover Center at Ohio University is empty. Small pieces of equipment sit out in the sun. The white cover is so glaring in the sun that professors have to shut their blinds – but not for long. By April, the roof will be covered in plants such as purple cone flowers, sunflowers, goldenrods, purple prairie clovers and milkweed.

“Green roofs in general are vegetated rooftops and they offer lots of benefits for communities.  We put plants on top of a roof that has been designed to hold plants and make sure the building is still protected,” said Kim Thompson who is an environmental and plant biology professor in Ohio University’s College of Arts and Sciences.

Thompson spearheaded the green roof project. She received a $10,000 grant from PepsiCo and $256,000 from the Ohio University Academic Innovation Accelerator to fund the construction and buy research equipment. Maintaining the rooftop and facilitating programming will be funded by private donations.

A Proposed Solution to a Growing Problem

According to NASA, 97% of climate scientists agree that global warming trends are caused by human activity. The Earth’s temperature has increased by 1.9 degrees Fahrenheit since 1800.  That may not sound like much, this warming has caused the amount of arctic ice to decrease by 12.8% each decade.

The green roof is part of Ohio University’s effort to combat the effects of climate change and reach a goal of being carbon neutral by 2050. The goal is part of the university’s Climate Action Plan and Sustainability Plan that was created when former President Roderick McDavis signed the American College and University Presidents Climate Commitment in 2007.

When it was originally signed, the goal of carbon neutrality was set at 2075. Recently, the Office of Sustainability received pre-approval from the Board of Trustees and current University President Duane Nellis to move the date up to 2050. With that, they will also be updating the Climate Action Plan and Sustainability Plan by combining them and revising the goals and benchmark phases.

The current Climate Action Plan, that was written in 2012, breaks down initiatives into four phases. These phase include smaller, benchmark goals such as reducing building energy, reducing greenhouse gas emissions and increasing renewable energy generation.

Sam Crowl, the associate director of sustainability at Ohio University, said he thinks accomplishing carbon neutrality by 2050 is attainable, but the university needs to start actively planning in order to reach this goal.

“We’ve reduced our greenhouse gas emissions by between 35% and 50% since 2012 when we first started the Climate Action Plan, so we’ve made some great progress. But we have more to go and if we target 2050 I think they’ll be more urgency and we’ll definitely get there,” Crowl said. 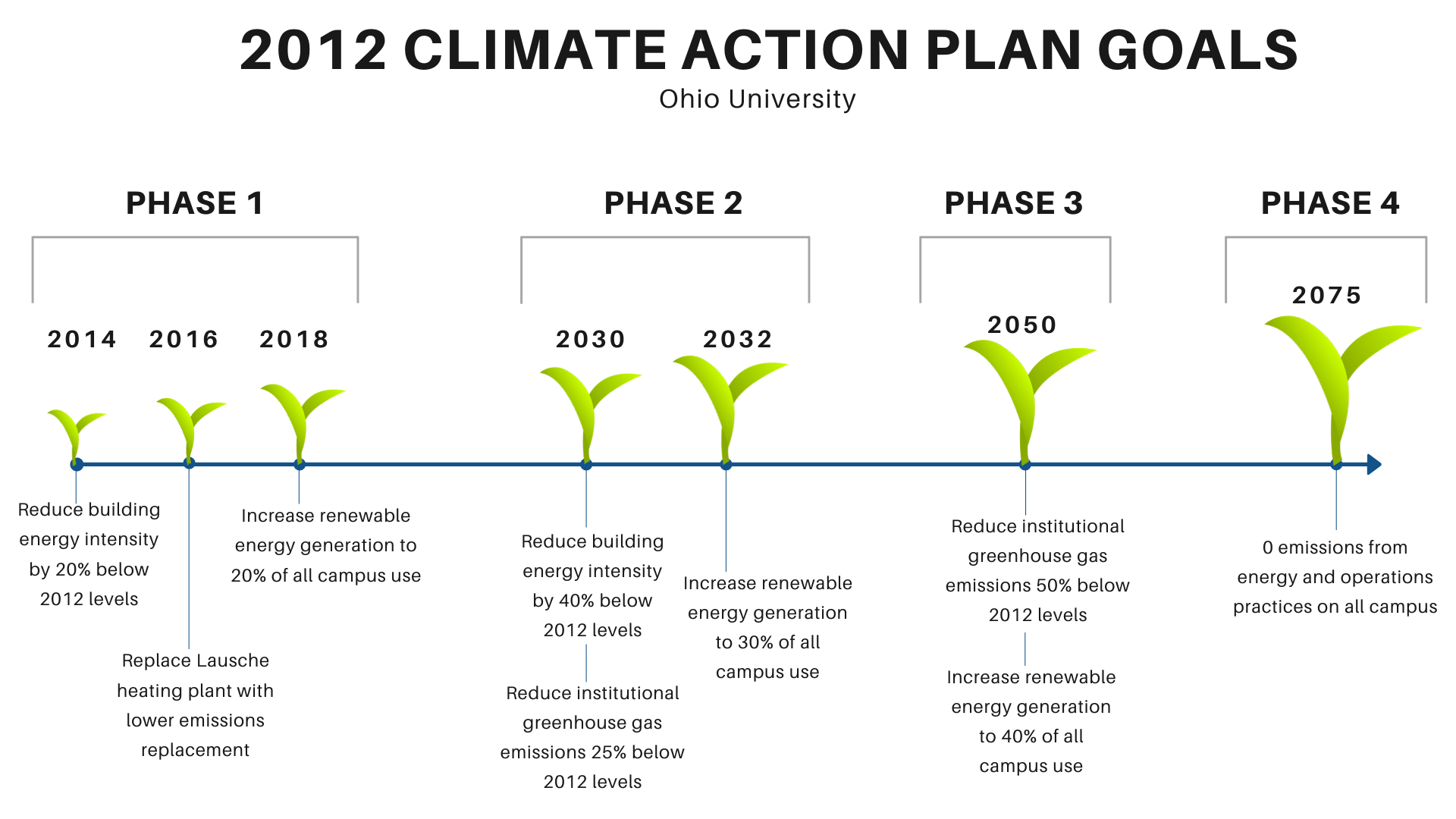 But these systematic, institution-wide changes that are needed to accomplish carbon neutrality come with a price. Crowl said there is not necessarily a set dollar amount of what it would take to implement the new plan, but he thinks much of it is about making behavior changes.

He said so far the Office of Sustainability has tried to target low-cost solutions to the problems, starting with incorporating green initiatives into faculty and staff job descriptions.

“If everybody at the university is thinking about sustainability, simple things like printing on two sides of a piece of paper rather than just one,” he said. “If we all make those small behavior changes then we can have a larger impact.”

Ohio University has made big changes in the past that have required a large upfront cost to lower emissions.

“For example we used to burn coal on campus to create heat, to create steam for our heating system and we switched that to natural gas,” Crowl said. “The reduction in the greenhouse gas emissions from moving from coal to natural gas is significant.”

To continue to build on past success, Crowl said moving the deadline up to 2050 felt like a natural move for Ohio University.

“We’re the first university in the state of Ohio to have an Office of Sustainability. We have a Sustainability Plan, we currently have a Climate Action Plan and not all institutions in Ohio have those,” he said. “So a lot of those institutions look to Ohio University for leadership and I’m very proud of that.”

Dr. Thompson said she hopes that the Schoonover green roof demonstrates the variety of benefits alternative infrastructure can have. She said she wants Ohio University to see how valuable it is, and hopes similar initiatives continue to expand across campus as part of the new sustainability plans.

Some other benefits of green roofs include reducing and cleaning stormwater runoff which can help with flash flooding and keeping buildings cooler in the summer and warmer in the winter which reduces energy usage. Green roofs also double the lifespan of the rooftop by protecting it from UV radiation.

“You need fewer materials to build a new roof,” Dr. Thompson said. “It saves money in the long run because you don’t have to replace the roof as frequently.”

Dr. Thompson is also using the green roof project to engage the community. Several school districts will receive models of small green roofs to be used in classrooms.  Students will be able to use the prototypes to do experiments and collect data while learning about sustainability efforts. Dr. Thompson said she will use some of the grant money to provide models to 15 districts, including schools in Athens, Vinton, Meigs, Hocking and Jackson.

“The engineers have been working for the entire year, two semesters, on these prototypes and they are thinking about how can we make this safe for children, how we can make it mobile so that teachers can move it around in their classroom,” Dr. Thompson said.

John Corcella is an engineering student at Ohio University who has been working on designing and building these prototypes with his roomate Johnny Murray. They are part of a student group called the Renaissance Engineers who have been collaborating with Dr. Thompson on outreach and education.

Both Dr. Thompson and Corcella agree that while it is important for Ohio University to combat climate change now, it is also important to educate younger kids on the importance of sustainability.

“I think exposing people when they’re young is a big thing because a lot of people are just now hearing about this at 23, 24 but if you hear about it when you’re 8 or 9 then it’s gonna stick with you more,” Corcella said.

Besides the green roof and exploration of sustainable infrastructure, Sam Crowl said another part of the Climate Action Plan is to reduce building energy usage. He said this means making new construction projects more sustainable and renovating old buildings to ensure they are energy efficient.

Crowl said Ohio University has been using the Leadership and Energy in Environmental Design, or LEED, building rating system to evaluate new construction projects for about 6 or 7 years. In order for buildings to become LEED certified, they earn points for sustainability initiatives such as building materials and indoor air quality.  The more points a project has, the higher LEED certification it receives. Right now, there are 13 buildings on campus that are certified including the new residence halls on South Green, the Sook Academic Center and the Clippinger Lab project that is currently being built.

“So you basically pay the contractor, the architect to build according to the LEED standards so that will ensure that you’re energy efficient, that you’re saving water, that you’re considering the land around you,” Crowl said.

He said paying contractors to follow the LEED system does cost more money at the beginning of a project, but the idea is that there will be return on the investment through reduced energy and water usage.

“I don’t have an exact dollar amount, but well, you know, if you have a $30 million project it might be $50 to 60 thousand that you’re paying so it’s small compared to the overall project,” he said. “But when you get down to the budget for an individual building sometimes those things add up quickly.”

But while renovating and building more sustainable infrastructure is expensive and time consuming, there are also other smaller things Crowl said everyone can do to help reach the goal of being carbon neutral.

“I would love to see everybody riding bicycles,” Crowl said. “It’s behavior change again, reduce our individual carbon footprint and have a real impact so that’s one thing that I’m excited about.”

Natural Gas Pipeline to be added for Ohio University