Jennifer Lahmers started in the role this past summer

ATHENS, OH – Former WOUB student and 2006 Ohio University E.W. Scripps School of Journalism graduate Jennifer Lahmers is still pinching herself. The Dover, Ohio native moved to Los Angeles this past August to take a job as co-host of the syndicated entertainment program Extra with Billy Bush.

“I could not be happier in Los Angeles doing what I’m doing, for sure,” said Lahmers. “The people that I work with are amazing and this is an amazing job. When this position was offered to me, I knew I had to do it. I didn’t have a husband or kids or anything like that, and if I’m ever going to do this, now is the time.”

Lahmers was brought on as part of an overhaul of the 19-year old program. In a time when people can get a great deal of celebrity news from social media, longtime Entertainment Television Producer Lisa Gregorisch-Dempsey decided to change the format of Extra to get away from press release and publicist-driven entertainment coverage and move to journalistic, transparent, authentic storytelling. Looking for an Extra co-host to pair with Bush who had a strong journalism background, Gregorisch-Dempsey reached out to Lahmers who’s contract was ending as morning anchor at Fox 5 in New York City. 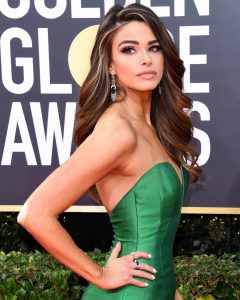 “Entertainment programs are normally hosted by former actors. That’s how it usually goes. But because Extra was changing the format completely, Lisa wanted to hire more journalists. Billy Bush is a strong journalist. He is the managing editor of Extra, and I’m his counterpart,” said Lahmers. “Through our own sources, which I’m still building in Hollywood, we will get our own leads, and it winds up being content that nobody else is showing. The stories are based on real relationships we have and relationships that Billy has built for years in Hollywood. We also are peeling back the layers of an entertainment show and showing people how it’s done. We have a lot of behind the scenes moments. We are airing segments of our morning meetings to show people what happens to have a story make air. I think it’s a great, up-close look at the evolution of an entertainment story.”

Looking back on her career to this point, Lahmers realizes she started to build her journalistic chops when she was a student at Ohio University and worked at WOUB.

“When I started at Ohio University, I wanted to learn and do everything, and I had heard you could get the hands-on experience at WOUB. You could do everything from news to sports to production. You could run teleprompter, do camera work, report, and anchor,” said Lahmers. “You also worked your way up. So, entry-level would be weekend morning radio, which is what I did. We got that experience from the ground up.”

During her time at WOUB, Lahmers took advantage of every opportunity in the newsroom. She jumped in with both feet, taking in all the opportunities and feedback from professional staff members so she could learn and grow.

“The experience I got at WOUB was pretty incredible. Working in an actual newsroom situation, we had breaking news. We had live stuff. We covered everything. You never really know what you want to be until you try it. So, it only reinforced that I wanted to be a storyteller on television. I remember I interviewed families of fallen service members, and it taught me a lot about what it means to be a sensitive, empathetic journalist. It taught me that you can tell the story as a journalist, but to be most effective you need to tell the story as a human being,” said Lahmers. “I also feel I built a thicker skin at WOUB. Students are there to learn, so the professional staff can’t give people blind optimism. I think WOUB, the people who work there, they give about as honest an appraisal of a person’s talent and capability as is needed for that person to grow. All of that really prepared me for my first job as a reporter, photographer and editor in Jackson, Tennessee.”

In that first job at WBBJ, it didn’t take long, only a couple of weeks, for Lahmers to be promoted to morning anchor. But a new news director was hired at the station and thought she had been moved into the role too quickly. He wanted Lahmers to get more experience and demoted her to weekend anchor. 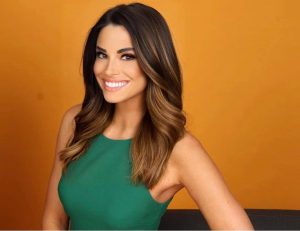 “Even though it was hard, I wouldn’t trade that experience for anything. I was able to handle it because of what I learned about feedback and criticism at WOUB,” said Lahmers. “It taught me not to get too comfortable in a situation and to work really, really hard to prove yourself.”

And prove herself she did. The weekend program garnered its highest ratings that year with Lahmers on the desk, and the news director offered her a promotion back to morning anchor. But Lahmers had other plans.

“I was hired at the Fox affiliate Hartford, Connecticut as a reporter,” said Lahmers. “I was the youngest person to be hired there at 23 years old. I did a lot of investigative reporting there, and I learned what it means to be an investigative journalist. I covered a story about a fatal hit and run accident. I had sources who told me that two off-duty police officers were involved in hitting and killing this child who was riding his bike across the street, and they tried to cover it up and hide evidence. I took the information I had to the state attorney’s office, and we worked with them to help prosecute the two police officers. I won AP awards and was nominated for an Emmy. That was a pretty significant moment because I realized that journalism could affect real change, and I got a real thirst for it what it means to be a serious news reporter.”

After five years in Connecticut, Lahmers decided to take a chance in the Big Apple. She applied for several jobs in New York City and landed a spot at Fox 5.

“I was freelance to start and then was hired full time a few months later,” said Lahmers. “I started filling in on the anchor desk. My bosses gave me a shot. They liked what they saw. They saw I was eager to improve and welcomed feedback and could take constructive criticism. I was then offered the morning anchor position and stayed there for two years until the offer came from Extra.”

Now Lahmers is enjoying her new adventure in Hollywood and says she conducts celebrity interviews with the same journalistic approach she’s always had.

“I’ve interviewed everybody from Brad Pitt to Scarlett Johannsson to Jamie Foxx to J. Lo,” said Lahmers. “It’s interesting to see what the world sees and what you see as a journalist. I mean, they are just people. They are just people who do something that is distributed to so many people. What they do garners way more attention than what others do. That’s all. I really don’t do much as far as change in my approach as an interviewer.”

“Absolutely take the experience from WOUB and do as much as you can, as often as you can,” said Lahmers. “The beauty about working at WOUB is that you leave with a resumé. You leave with stuff that’s on camera. A lot of students come out of other schools without a built-in radio and TV station, and they don’t have that. You have this wonderful institution that is going to give you so much experience. Use it.”