It wasn’t unlike a player shooting fouls shots at the end of a long practice to keep that part of their game crisp.

But for Dartis, a fifth-year senior playing potentially his final game in the building he’s called home since the fall of 2015, it was a chance for him to take in the Convo one last time.

“It’s just like you’re by yourself in the gym again,” Dartis said. “Just embracing those little moments like that man. It brightened my day.” 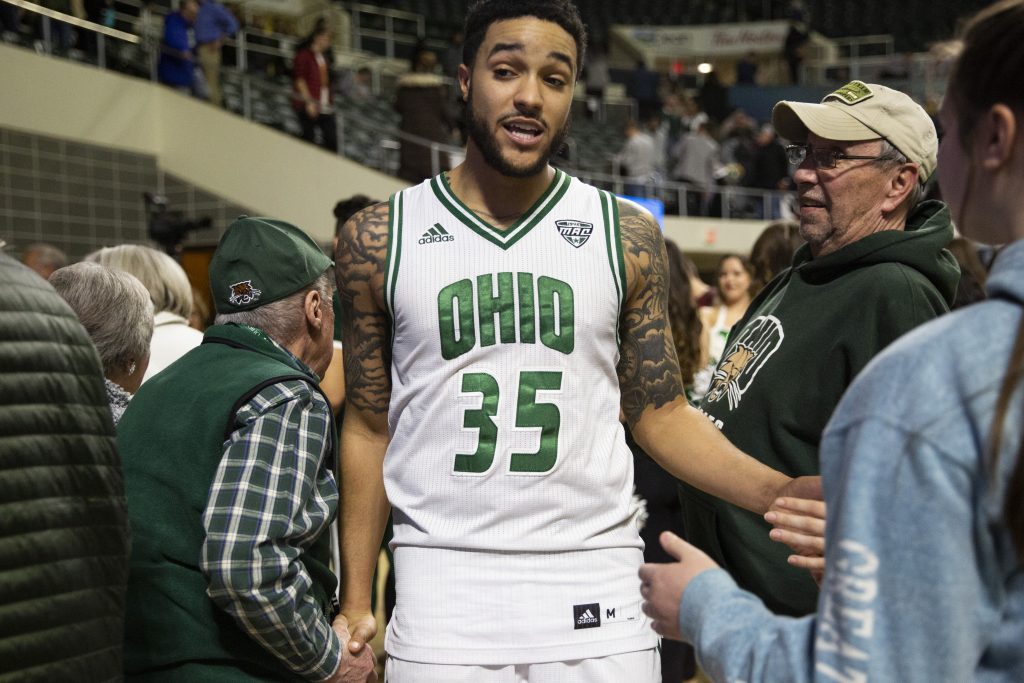 “(This game) was big for a lot of reasons. One, we’re fighting for seeding. This is the third team that we’ve beaten that was above us,” Ohio head coach Jeff Boals said. “And we wanted to win for (Dartis and Ogbonda). Hopefully it’s not their last game here.”

Ohio got contributions from every man who saw the floor against the golden Flashes, but perhaps none made a bigger impact in crunch time than freshman Lunden McDay.

McDay, who had started nearly every game this season before spraining his ankle in practice before the Bobcats’ game against Bowling Green last Saturday, came off the bench to score 16 second half points to stave off the Golden Flashes.

Against the Bulls this past Tuesday, McDay managed just seven points in 16 minutes of play. On Friday night, however, his gritty style of play not only earned him nearly 30 minutes of playing time, he was a key factor in the Bobcats’ victory.

“He’s a winner…he knows what it takes to win. His teammates have a lot of confidence in him,” Boals said of his freshman guard. “He’s going to keep getting better and better.”

Despite tossing in the 16 points, it was McDay’s effort plays that made the biggest difference down the stretch. In the game, he also tallied four rebounds and four steals, including two steals in the final three minutes of play that led directly to four Ohio points.

He also knocked down a clutch three with just over two minutes to play to put the ‘Cats back on top by four. Prior to that shot, he had missed both threes he had taken.

“I’m kind of used to this from high school,” McDay said of his tough play. “Moments like this, I love it.” 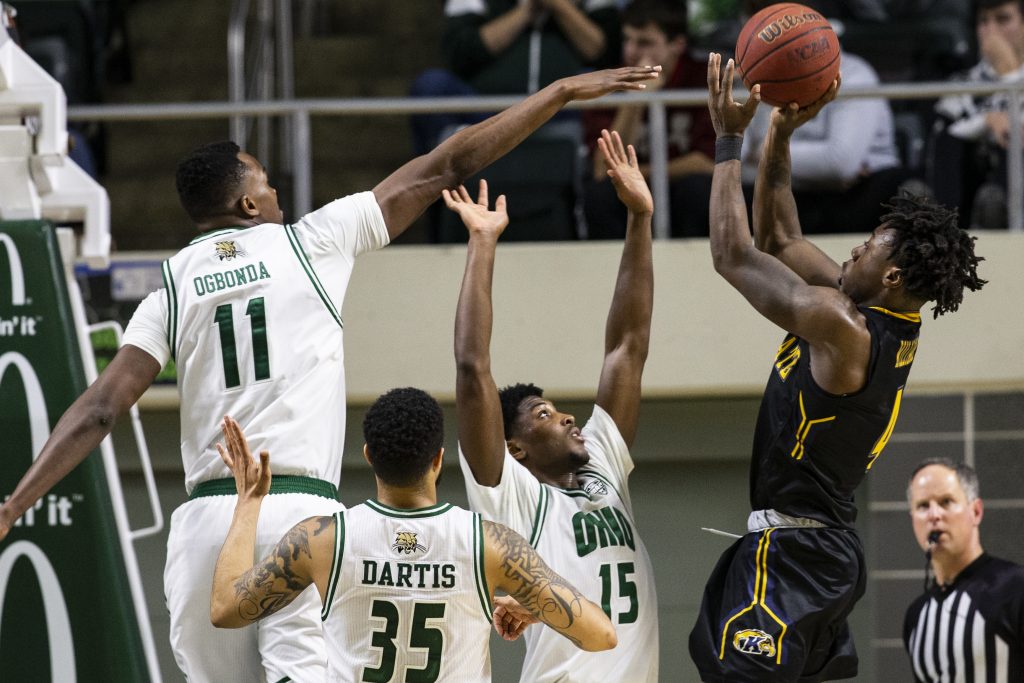 The play Friday night lent itself to McDay’s gutsy play. The game was physical from the opening tip, as one might expect from a late-season conference game between in-state rivals. The game included intentional fouls, a couple of technicals and even an ejection when Kent State’s Danny Pippen was tossed for throwing an elbow at the other Bobcat celebrating his senior night, Sylvester Ogbonda.

“The game was physical the whole time, we were playing with an edge,” McDay said of the flagrant foul. “That just added more fuel to the fire.”

Not that the ‘Cats needed any more fuel on that fire. Their defense has been stout in the Convo during their five-game winning streak. In those games, the Ohio defense has yet to give up more than 70 points in a game and are giving up just 62.8 points per game.

In that same span, the ‘Cats are scoring at a high rate, averaging 76.6 points per game. Much of that is due to their sophomore tandem of Jason Preston and Ben Vander Plas. In their Convo winning streak, they both are averaging 17.6 points per game.

On Friday night, they both outperformed that average.

Vander Plas ended the game leading the Bobcats in points with 20, shooting 6-of-12 from the field. He also grabbed five rebounds.

Preston added 18 points, with 10 of those coming in the final 20 minutes of play, but his most impressive feat Friday night came in his ability to run the ‘Cats offense. He dished out 10 assists without turning the ball over a single time, the first time this season that the sophomore guard has not registered a turnover.

“(Preston) does a lot for us at that point guard position, playing 40 minutes a game,” Dartis said. “We’re getting wide open looks and knocking down shots for him.”

“We ask Jason to do a lot. He’s making the passes and there’s a lot of attention on him,” Boals said. “For him to have no turnovers and play 40 minutes…phenomenal.” 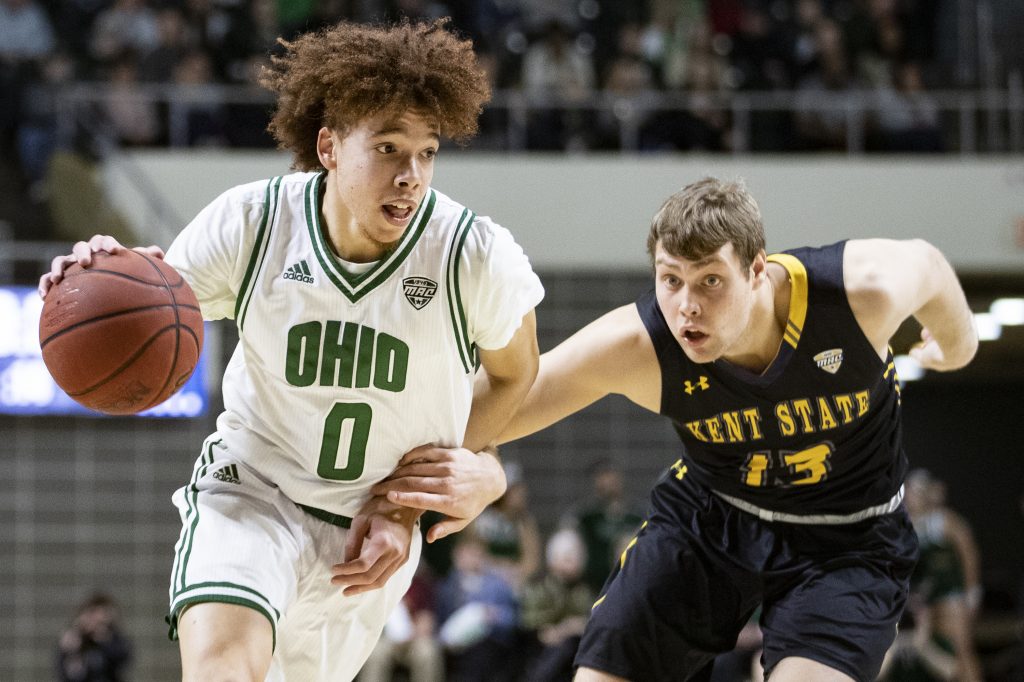 The Bobcats started this season as a young, unproven team, picked to finish last in the MAC in preseason polls. However, since the calendar flipped to February, the ‘Cats have been on a roll, winning five of their eight games in the month.

This has put them in a position to host a game in the first round of the MAC Tournament in a couple of weeks.

But whether or not this has alerted the conference to the team they can be doesn’t concern Jeff Boals.

“We’re not really worried about what other people think. The biggest thing is that our guys have confidence,” he said. “I always talk about ‘control what you can’ – your attitude, your actions.”

At this time of the season, playing a confident basketball team with a lot of momentum can be a daunting task.

“Momentum is with us,” Dartis said. “We just got to do our jobs to confirm the home game.”

The final week of the regular season for the Bobcats begins with a trip to Akron to face the Zips. When the teams met at the end of January, Akron came to the Convo and left with an 88-86 shootout win.

Ohio Men’s Basketball: ‘Cats Run Out of Gas in Loss to Purdue