Another Epidemic: Youth Vaping on the Rise

Teen vaping is reaching epidemic proportions, with nearly 40 percent of 12th graders reporting use of a vaping device in the past year, and more than 20 percent reporting vaping in the past month. According to the manufacturer, a single JUUL pod contains as much nicotine as a pack of 20 regular cigarettes, so why is this the most used tobacco product among adolescents?

E-cigarettes entered the U.S. market around 2007, these products include: e-cigs, e-hookahs, vape pens or electronic nicotine delivery systems. A lot of these devices look like regular cigarettes, cigars or pipes, while others look like everyday items. According to Tobacco Free Kids, kid-friendly marketing has made the vaping industry worth about 14 billion dollars. Flavors range from fruits to gummy bears.

However, the Director of the U.S. Centers for Disease Control and Prevention, Dr. Robert Redfield has announced that these devices are not safe for youth, young adults, or adults who do not currently use tobacco products. While parents are still confused about the dangerous effects, schools are starting to take notice of this epidemic.

Increase Use in School System

Athens School Board President, Sean Parsons, has seen this affect some students at Athens. At Athens High School, he has had almost 80 incidents of tobacco use. He says, “Even when they changed the law to having to be a certain age to buy the vape pens…we still have about the same number of students consuming them.”

When teens are consuming these products, they aren’t sure what ingredients are inside of them. The science behind it:  they produce an aerosol by heating a liquid that usually contains nicotine, flavorings, and other chemicals that help to make the aerosol.

Ana Rosado Feger, a parent involved with the Athens Academic Boosters has an alumnus and a current student at Athens High. She has heard backlash from some parents who believe that it is better than smoking, but she says, “One is not better than the other. Vaping has some hidden issues to it that aren’t apparent.”

Feger’s son has started to notice the problem at the high school, she says, “ It’s him recognizing that kids that are vaping can’t stop. They have tried and they can’t. That is one of the things he says is that it’s everywhere.”

It is not only a noticeable issue at Athens High School, but also at Ohio University. A 2019 OU survey concluded that 24.3% of students reported using JUULS or other e-cigarettes for vaping. This is why in 2017 a tobacco and smoke-free initiative took effect on campus. The university not only wants to become more environmentally friendly, but hopes this movement will prepare students for a healthy and tobacco-free future.

Terry Koons, the Associate Director of Health Promotion at Ohio University, believes that the addiction starts young and will continue.

“If you get people at a young age addicted to nicotine they’re less likely to quit. So the younger you start the less likely it is for you to quit.” said Koons. “We also know that the average nicotine user takes seven tries to find the right sensation product for them to be able to quit.”

Koons attributes these early addiction characteristics in youth culture to social pressure. Students and young adults use these devices not because they really want to, but to avoid the “odd man out” stereotype.

Tony Geraci, a junior at Ohio University, agrees with Koons because he saw it in himself, “ I think it comes with some type of party scene. Kids wanna fit in with the crowd. I guess it’s some sort of peer pressure thing,” Geraci said.

Administration at all levels is trying to combat the issue. The ‘tobacco21’ law took effect in the state of Ohio last October. This raised t 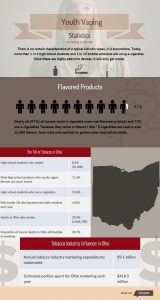 he age to purchase tobacco products from 18 to 21. This law was put into place to reduce access of nicotine products to those under the age of 21.

In the Fall Governor Mike DeWine called for a statewide ban of the sale of all flavored vaping products. DeWine credits young people for the high sales of flavored products, and he is working on legislation to permanently ban flavored electronic cigarettes.

Nationally, the Trump Administration is trying to come up with ways to kill the nicotine buzz from the younger generation. A nation-wide ban of many fruit flavored nicotine products went into effect last fall, but the ban only focuses on disposable cartridge based products.

Some Ohioans Are Fuming Over Flavored Vaping Products