ATHENS, OH – When Baltimore Ravens Director of Social Media and Digital Host Garrett Downing started as a student at Ohio University in the fall of 2006, he dreamed about working for an NFL team someday. 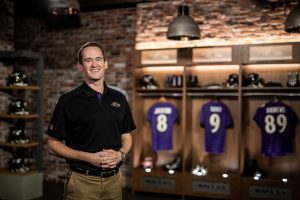 “I grew up a Browns fan. I never imagined I would work for the Ravens,” said Downing laughing. “But I knew I wanted to work in the sports media world. What that looked like I wasn’t sure. I was looking to develop skills that put me in the right place at the right time for whatever direction my career went, and that is what happened with the Ravens. It is a thrill to be able to do. I’m fortunate to be doing it.”

Downing, who is from Columbus, is a 2010 journalism graduate. He started working at WOUB his first Friday on campus to be a part of Gridiron Glory, WOUB’s weekly high school football program. Downing learned about the opportunities available at WOUB during his campus visit and says that is what sold him on Ohio University.

“I came down to Ohio University for the tour because I heard about the quality of the journalism school and what students could do at WOUB,” said Downing. “I knew I wanted to do sports journalism when I came for my campus visit. On the tour, we went through WOUB and met people who worked on Gridiron Glory. WOUB was a huge part of the reason I came to Ohio University.”

Downing went on to volunteer at WOUB and work on Gridiron Glory for the next four years. He was named the show’s host his junior and senior year. Downing also anchored sports on Newswatch, helped with the Ohio University coaches show, Bobcat Blitz, and worked with others to launch WOUB’s high school basketball program Hardwood Heroes.

“The experience with WOUB was probably more significant than what I learned in the actual classroom. The hands-on training allowed me to be prepared when I applied for internships and when I got my first job,” said Downing. “It was the perfect real-world job as a college student. I learned from students who were older than me. I learned from professional staff members at WOUB, and it set me up in an incredible way to be prepared to go out into the workforce.”

Downing’s first job out of college was as a digital content producer at WEWS TV in Cleveland. He wrote articles for the website and managed the station’s social media accounts.

“They knew I had done a lot of on-camera work when I was at WOUB,” said Downing. “I found my way on to WEWS’ high school football television show as an on-camera reporter as a direct result of the experience I had at WOUB.”

In October 2011, after working in Cleveland for about a year and a half, Downing applied for a job as a staff writer for the Baltimore Ravens.

“I was basically hired as an in-house reporter for the Ravens,” said Downing. “I was covering the team and writing articles about everything happening for the Ravens’ website. I was also doing on-camera work as the anchor/host for videos used on the website, apps and social media platforms.”

Downing worked his way up to director of social media and online host. He is now the on-camera talent for a daily video series, hosts the Ravens’ podcast and conducts interviews with players.

“During the football season, we have two television shows we produce in house that run in the market, and I am a reporter on those as well,” said Downing. “We create all kinds of social media content, and I oversee the Ravens’ social media staff.”

The Ravens’ Twitter site was recently ranked number one in the NFL by Complex Sports, a sports news and analysis website.

“It was an incredible season. It was fun to be able cover a team with the kind of success we had this year and a player like Quarterback Lamar Jackson,” said Downing. “The biggest thing we were able to do this year on social media was capture incredible moments and tap into the excitement around our players and team. People felt like they got to know our team and personalities. We were able to pull back the curtain in ways we haven’t done before.”

Downing is having fun and loving his job. It’s an experience he knows he owes to the days he spent working on Gridiron Glory at WOUB.

“There is no better training ground that I can think of,” said Downing. “The Friday night experience of doing that live show, I learned so much. There was excitement and nervousness, and it was thrilling. It was a great professional and social experience. It wasn’t just work. It was also fun.”