ATHENS, OH – Mother and daughter (Veanise) Gina Moore and Jennifer Moore are the embodiment of the saying “The apple doesn’t fall far from the tree.” The Moore women both pursued and earned journalism degrees at Ohio University and both gained real-world experience by working at WOUB. Gina and Jennifer found tremendous value in the training WOUB provided because the tough love and constructive criticism prepared them for successful careers in broadcast news.

“It made us ready for real life in a real newsroom,” said Gina. “You get a story, get it right and if you don’t get it right, you deal with the consequences.” 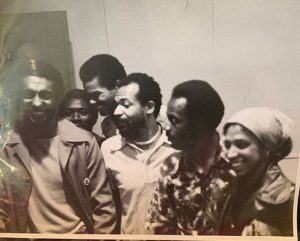 Gina worked at WOUB from 1977 to 1979 and co-hosted a talk show on Sunday nights with Professor Horace Coleman called Black Talk Live.  The program helped her learn her craft while giving her the opportunity to explore African American history in Athens.

“I learned all of the little things, everything I could,” said Gina. “I really valued the experience I got at WOUB. After graduation I was ready to work and spent more than 20 years in broadcasting working on the air and behind the scenes, mostly in the Cincinnati area at WLW-AM, WKRC and WCIN.”

For about ten years, Gina was the Cincinnati chaperone for an annual overnight trip to Athens to introduce minority students to Ohio 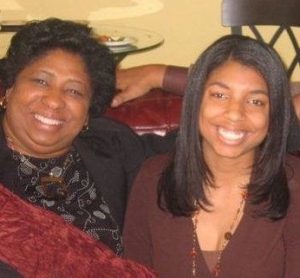 University. So, in 2003 when Gina found out her daughter wanted to follow in her footsteps and pursue journalism in college, Ohio University and WOUB seemed like a no-brainer. But Jennifer had other ideas.

“I didn’t want to go to Ohio University at first,” said Jennifer. “But my mom scheduled a visit, and then I fell in love with the place.” It became a family affair as Gina’s son and Jennifer’s brother, Victor Moore is also an Ohio University graduate in aviation engineering.

During her time in Athens, Jennifer worked on a cultural program on WOUB called Sauti, which was a student-run television show that focused on topics impacting minority students on Ohio University’s campus. During her sophomore year, she started volunteering in the WOUB newsroom and worked her way up. First, she reported and anchored on the radio, then she started reporting, anchoring and producing on WOUB TV’s Newswatch.

“I learned a lot from Newswatch by producing and being on-set and being on-air. Most of my memories of my reporting experience in college came from WOUB,” said Jennifer. “I appreciated the experience you got and the camaraderie with other students. Everybody was in the same boat trying to get experience to get a job.” 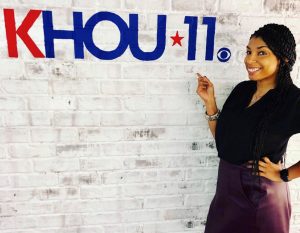 Jennifer is now the Dayside Executive Producer at KHOU TV in Houston, Texas. She’s thankful that her mom steered her in the direction of Ohio University and for the sage advice her mom gave her.

“My mom told me if I ran into any roadblocks to keep trying because in order to get experience you have to work at WOUB,” said Jennifer. “She said to never take no for an answer.”

“I just shared with her what I learned,” said Gina. “WOUB and Ohio University taught me to never give up if I really wanted to do something. It taught me about the real broadcasting business and prepared me for the industry I wanted to go into.”