ATHENS, Ohio (WOUB) — As law enforcement officers’ use of force is again in national news after the death of George Floyd, the heads of three Athens County agencies say they emphasize communication and repeated training for their officers.

Since Floyd’s death on Memorial Day, people have protested across the United States and in several other countries, calling for justice and for a change in policing policies. There have been protests in Athens, as well: at the county courthouse, on State Street, and on College Green.

“There should be protests, quite frankly,” he said. “They have a right to be angry about what occurred and what has occurred.”

Andrew Powers, chief of the Ohio University Police Department, said he condemns the actions of the Minneapolis police officers who killed George Floyd “in the strongest possible terms.”

“I don’t believe there is an excuse or justification for the type and level of force these officers used,” Powers said. “It’s horrible to watch. The impact it has on the lives of people of color is heartbreaking.”

He added that he does not believe kneeling on someone’s neck is objectively reasonable “by anyone’s standard, and certainly not mine.” 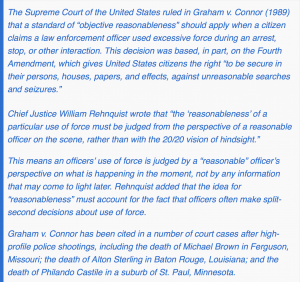 Smith said other law enforcement officers he has spoken with also disagree with Chauvin’s actions.

“There’s not an officer I’ve talked to, that it doesn’t make you cringe and sick to your stomach when you watch that (the George Floyd video). It goes against everything that we stand for here,” he said. “It just does, it’s horrible.”

Defining use of force

There is no universal definition or set of guidelines for law enforcement’s use of force, according to the U.S. Department of Justice.

Smith explained the levels of force police and deputies use include officer presence, verbal commands, physical restraint, non-lethal force such as Tasers and pepper spray, and lethal force.

“It’s all relevant to what’s going on,” he said. “You deal with them differently, depending on the situation.”

Powers explained that use of force is a response to a civilian’s actions; the officer’s actions “should always be a response to the actions of people you’re trying to control.”

“Use of force is a fluid situation. If someone was assaulting you a moment ago, you shouldn’t keep treating them as they are. You have an obligation to de-escalate to the level that individual is currently at.”

Ohio law requires a minimum of 737 hours of training for peace officers, and up to 24 hours of continuing professional training each year. The Athens Police Department, OUPD, and Athens County Sheriff’s Office are all certified by the Ohio Collaborative Community-Police Advisory Board, which established state standards including use of force and bias-free policing.

For the Athens County Sheriff’s Office, Ohio University Police Department, and Athens City Police Department, training on specific standards for use of force begins when an officer or deputy is in state peace officer training. Then, individuals learn about each agency’s specific policies after they are hired.

Pyle said APD meets the annual training standards as required by the Ohio Collaborative Community-Police Advisory Board. He said every use of force incident beyond application of handcuffs is reviewed by several lieutenants and himself, based on the staffing at the time.

Powers said OU Police have a policy for officers to intercede or inform a supervisor if they see another officer going against OUPD’s use of force policy. He also said OUPD policy is to document all use of force beyond empty hand control and routine handcuffing. This report is reviewed by the officer’s supervisor, the command officer, and Powers himself. If a citizen claims injury during an arrest or encounter with an OUPD officer, there is an internal investigation. Powers said he reviews these cases every year to make sure there are no patterns of bias.

Powers said OUPD officers do annual training on use of force decisionmaking, and review all department policy monthly.

“Use of force is an extremely complicated process,” he said. “…That’s why we do so much training in this when you work in this profession. The skill has to be constantly refreshed.”

Smith said Sheriff’s Office deputies and their supervisors re-train every year in a classroom setting to go over use of force and bias-free policing policies.

He said if a deputy uses force beyond open hand control and handcuffing a person, or if a person claims injury, a lieutenant or the officer in charge will start an action response report. The report is then reviewed by the captain and Sheriff Smith. He also said deputies are required to document traffic stops, which are reviewed annually.

“At the end of the year everything is looked at,” Smith said. “And we see, you know, make sure there is no discrepancy of a certain officer pulling over more minorities than White people.”

Law enforcement officers in Athens County also complete training on a variety of other topics, including racial intelligence training and programs to help them better serve victims of trauma.

“We’ve been pretty active in seeking trauma-informed training for our staff for the past several years,” Pyle said, “from the sexual assault survivor and advocacy perspective and the investigative perspective.”

Smith, Pyle, and Powers said their employees go through Crisis Intervention Team training, which focuses on communicating with people with mental illness or addictions.

Powers, Pyle, and Smith said a key component of interactions with the public is communicating, and de-escalating a situation.

“A lot of times people are just confused,” Smith said. “When you’re dealing with the police, it’s probably the worst time of your life. It’s up to us that when we speak to people, they understand what is going on.”

Pyle said it is important for officers to de-escalate a situation, particularly if someone is intoxicated and/or already agitated because of a fist fight or argument with their partner.

“A majority of the amount of time, an officer gets somebody’s attention, makes sure they understand they’re a police officer and tries to speak to them,” he said. “And then sometimes it escalates rapidly, sometimes people try to run away which results in the officer trying to stop them because they have a duty to investigate. …We always, typically, try to announce ourselves and try to de-escalate.”

Pyle said the Athens Police Department has outreach programs full-time and meets monthly with the Joint Police Advisory Committee, which includes representatives from Ohio University and

the Athens community. The Ohio University Police Department is also represented on this committee.

“There’s always room for improvement but we do a fair share of community outreach,” Pyle said.

The JPAC sponsors the annual “BBQ on the Bricks” where Ohio University students can meet with local law enforcement at Baker Center.

Pyle and Powers joined an “Ask the Chiefs” forum last fall after the arrest of a Black University of Cincinnati student that drew ire on social media. The three officers involved in the arrest are still APD officers.

Smith said connecting with the public is crucial, especially as the Sheriff’s Department covers the entire county.

“What’s going on in Nelsonville is different than Coolville,” he said. They have different issues, different problems…you have to build a trust, a rapport with the public. We try hard to do that. And I think the only way you can accomplish that is by meeting people and interacting with people and letting them get to know myself and the deputies and the officers and our staff here.”

Local Law Enforcement Use of Force Policies Vary, Emphasis on Training Does Not

Advanced Training for Ohio Officers Includes Use of Force