Ken Neben graduated with a telecommunications degree in 1997

ATHENS, OH – Many come to Ohio University because they know they want to get into media. But MSNBC Director Ken Neben had a different story. After four years in the U.S. Navy, Neben came to Athens and discovered his love for media through work at WOUB. 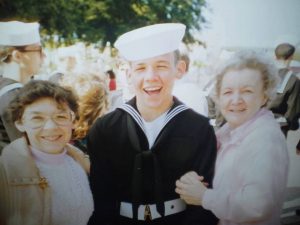 “I grew up in Dayton. My step-brother went to Ohio University, and I was in the Navy and wanted to go to school,” said Neben. “So at 22 years old, I decided to follow a similar path, but I wasn’t sure about a major. I thought about engineering and education. But then I found that the production side of broadcasting and communication interested me.”

During his freshman year, Neben worked at the student-run radio station ACRN, the All-Campus Radio Network. During his time at ACRN, he learned about the opportunities at WOUB because many of his friends were working at both stations.

“During one of the school breaks, I decided I was going to stay on campus, and I learned that WOUB needed students to work,” said Neben. “Because of the audio work I had been doing at ACRN, I had a little training. So, I applied to be the audio director for WOUB TV’s Newswatch over break and got the job.”

After that, Neben was hooked on WOUB. He moved through every available production position at WOUB. He eventually moved into leadership roles, building the weekly schedules and leading the student training program.

Through his work at WOUB, Neben had figured out what he loved to do, but he still wasn’t sure what kind of media job he wanted. When he graduated with a telecommunications degree in 1997, Neben decided to try his hand in Hollywood. 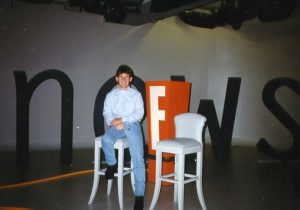 “I interned at E! News Daily. I moved out to Los Angeles thinking I wanted to work in the entertainment industry, either film or television,” said Neben. “But LA wasn’t kind to me, and I realized what I actually did want to do.  I realized I liked being involved in live news.”

Neben got a job as a director and master control operator at a TV station in Huntsville, Alabama. After that he worked at stations in Columbus and Cincinnati before moving to the Big Apple to work at MSNBC where he has been a director for 15 years.

“I currently direct a show called The 11th Hour with Brian Williams,” said Neben. “But for many years I was a utility director which meant I could and did direct every single program on the network when a director was needed. I had to be able to fill in and work with different show teams without any feeling of diminished quality.”

Neben says his ability to work well with different people and do any job that was asked of him came from his time at WOUB.

“WOUB helped me learn it all and learn to work with everybody,” said Neben. “I was taught to have a good, positive attitude and take on whatever came my way.”

Students can do as much as they want to at WOUB, and Neben says that was one of the best things about his WOUB experience.

“I took full advantage of all of that. I learned how to direct and technical direct at the same time which helped me get that first job in Alabama because smaller stations don’t have directors and technical directors,” said Neben. “Students can use the experience they gain at WOUB in their career to help them get a job that might have been out of reach.”