CALLOWAY COUNTY, Ky. (OVR) — Rick Murdock drives past his neighbors on rural back roads in southwest Calloway County, Kentucky, most days in his pickup truck, where he’ll pass by some signs of the season — “Trump 2020” flags and signs.

Murdock said he’s never been the type to put up signs or banners himself supporting a particular candidate — “I would not want to offend my brother, or my neighbor” — but he does consider himself to be a conservative, a Christian. He recalled a past Election Day when he took his then 8-year-old daughter with him to the voting booth to show her what the process was like. He voted for former President George W. Bush that year.

“The curtain came around us, and she was standing there with me. And when I voted for Bush, she stomped her foot,” he said with a laugh. “So, my eight-year-old daughter thought I made a bad choice that day.”

Lately, it seems, there’s a lot more foot-stomping when people talk politics, and it’s not just from kids. With weeks before the election, he’s finding it nearly impossible to talk with his western Kentucky neighbors, many of them also farmers, about politics, about the election, about President Donald Trump. Any attempt feels like wasted breath to him.

“It’s so polarized right now that it immediately turns into a bad discussion. And so that is a huge problem,” he said, speaking behind a blue mask. “If you’re a follower of Jesus, you’re taught to love your neighbor, and you’re taught how to help your neighbor. And now neighbors don’t even speak to each other over this crap.”

Murdock didn’t vote for Trump in 2016, and he’s not planning on voting for him this year. He lists several reasons, including his perception of the president’s moral compass and how he’s handled the COVID-19 pandemic. He knows he’s in the minority among his neighbors in Calloway County, where Trump won by 35 percentage points in 2016.

But those aren’t the only reasons Murdock opposes the president. He’s also worried about the more than $1.5 billion the U.S. Department of Agriculture has sent to the Ohio Valley over the past few years to offset trade war damages and the pandemic’s economic impact, especially as the Trump administration approved billions more for agriculture months before the election.

That consequence, he said, is the soaring federal deficit, especially with the onset of trillions of dollars in COVID-19 relief. Murdock is also concerned about the long-term effects of Trump’s trade war. He spent part of his childhood in Brazil and learned to speak fluent Portuguese, following his dad who helped rural farmers there increase their yields.

After years of retaliatory tariffs by the Trump administration against China and other countries, Murdock fears a legacy of Trump’s trade war could be a permanent loss of U.S. market share worldwide as China looks to Brazil for commodity supplies instead.

While polls indicate most Ohio Valley farmers still support Trump, they’re also reflecting on the promises he made to agriculture, and some ultimately worry about the lasting impact his policies may have on farming families and their financial security.

It was in early August when Tom Folz started to feel worn out, tired all the time. He isn’t exactly sure how the coronavirus reached his farm with thousands of acres of soybeans and corn in a rural part of Christian County, but soon his sons and extended famly fell sick with the disease.

“A lot of mornings, I would wake up when I had it and think it was over with, but that afternoon, it would kick me again and tell me it was still there,” Folz said. “Even though my symptoms were somewhat bad, they weren’t severe. And I’ve heard of people that they were severe, and they’ve had to go to the hospital and be on the ventilator.”

He feels lucky that no one in his family needed to be hospitalized, in a county where COVID-19 is still spreading rapidly through communities. The Ohio Valley ReSource’s COVID Data Tracker shows that as of October 16 there have been 1,659 cases of COVID-19 in Christian County, which has a population of about 72,000. That’s 2,296 cases per 100,000 people.

Folz said he never wanted to wear a mask in the first place, which he figures is a reason why he caught COVID-19. And he doesn’t blame Trump for how he’s handled the pandemic, saying there’s nothing the president could have done to stop it.

He also appreciates how Trump made an effort to address what he calls unfair trade practices with China, even though Folz has felt a significant financial squeeze from retaliatory tariffs. He also agrees with Trump’s anti-abortion stance, and he’s supporting Trump this fall.

According to recent polls by agriculture and trade publications, Folz is part of a large majority among farmers. A DTN/Progressive Farmer poll from late September of more than 1,000 people living in rural counties found that 50% planned to vote for Trump, a 17% lead over Democratic candidate former Vice-President Joe Biden.

Folz rejected the argument that the hundreds of millions of dollars in federal payments to Ohio Valley agriculture had any political influence. He countered that there were too few farmers for the votes to matter. Regardless, he said, he needed the payments to stay on solid financial footing.

“In the downturn we had in markets, there’s not much left at the end of the rainbow, you could say without government money,” Folz said. “I hate government money, but I want to live and I want to be profitable to where I can keep going year to year.”

Ben Klick is a northeast Ohio farmer who serves as vice-president of the Ohio and Corn Grower Association, and he agrees the payments have helped some farmers in the country facing uncontrollable factors including poor weather. But he doesn’t agree with how the payments have been distributed.

“I can obviously see how people would be like, ‘yeah, that’s how he’s going to buy our vote,’” Klick said. “I don’t agree with [the payments]. And I’m still going to vote for a guy. So, I mean, what’s that tell you?”

Klick said Trump isn’t the perfect person, but he’s supporting Trump this election in part because of what Klick fears Biden could do to agriculture. He believes Biden is borrowing from the Green New Deal for aspects of his agriculture plan and fears that could hurt farming.

“The farming world is very scared. I’ve a lot of friends that work in the oil and gas field around here that are extremely scared for their livelihood,” Klick said. “I don’t think you’re gonna have any trouble with small town agricultural base folks voting for him by any means.”

In addition to subsidies associated with the Farm Bill and other long-standing agricultural programs, two new programs emerged in the Trump administration specifically to send money to farmers to address the effects of trade disruption and the market downturn due to the coronavirus pandemic: the Market Facilitation Program and the Coronavirus Food Assistance Program.

Together, the two programs have pumped a staggering $37.9 billion into farm economies around the country, according to USDA data and the Environmental Working Group, an advocacy organization that has long tracked farm subsidies.

The Ohio Valley has received $1,379,148,860 through the Market Facilitation Program since the federal program’s inception in 2018 through June 30, 2020, meant to offset economic damages from the trade war’s retaliatory tariffs. The Coronavirus Food Assistance Program, to offset economic damages from the pandemic, sent another $213,935,751 to recipients in the same period. (The Environmental Working Group supplied USDA data obtained via the Freedom of Information Act.)

In Ohio Valley, Northern Ohio has been the biggest beneficiary of the Market Facilitation Program as the state received nearly $1 billion in payments in 2018 and 2019 combined. That is more than twice the amount received by Kentucky and West Virginia, according to the analysis of data provided by EWG.

Eight Ohio Valley cities in these three states took more than $10 million in Market Facilitation Program payments in 2018 and 2019, with these cities leading the pack: Owensboro, Hopkinsville, and Morganfield in Kentucky; and Upper Sandusky and Circleville in Ohio.

As the coronavirus pandemic drove a hole in state economies across the country, the agriculture sector also bore some of the brunt, leaving farmers in need of assistance. Overall, as of October 13, farmers in Ohio, Kentucky and West Virginia had received a combined $635 million in COVID-19 relief payments, after a second phase of the Coronavirus Food Assistance Program started payments. 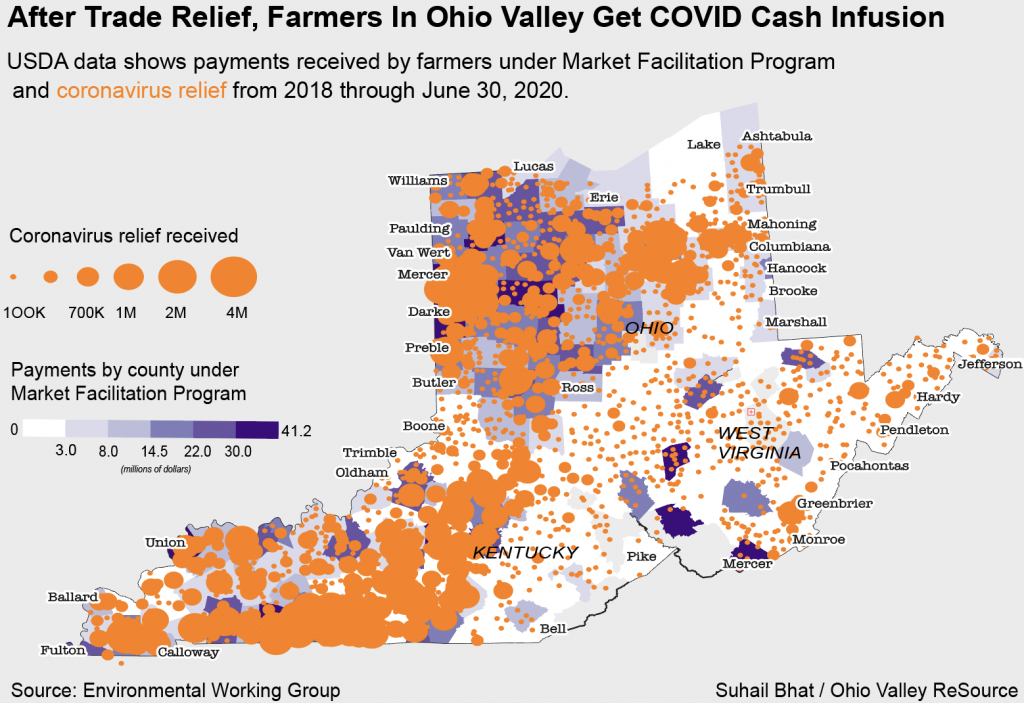 Under COVID-19 relief, farmers in Mayfield, Kentucky, got more than $4 million and farmers in the Kentucky cities of Columbia, Glasgow, and Scottsville, and Ohio’s Maria Stein received more than $2 million each.

Looking beyond this election, some in agriculture worry about the lasting impacts the trade war and the large payments will have on the future health of the farm economy. The USDA recently forecast net farm income this year to rise above $100 billion for the first time since 2014. But more than a third of that income was expected to come from federal payments.

Ben Brown is an Assistant Professor of Professional Practice in agricultural risk management at Ohio State University, and he believes most farmers are optimistic for the future with corn prices and soybean prices up from six months ago, and with yields looking better than expected in Ohio.

But he and his colleagues do have a slight worry over how farmers are using federal payments, considering they can disappear with the changing political winds.

“Our hope is that farmers work down debt and use this money to pay down debt, rather than financing their operation,” Brown said. “Our concern a little bit is that farms are using this as working capital, and so then when the government payments end, they have no way to finance their operation. They remain over leveraged.”

Brown said while the total federal payments are a record amount for the modern era of farming, there have been past years where the percent of farm income coming from government sources has been higher than now.

Yet Ohio Farmers Union President Joe Logan calls the payments a “sugar high” that farmers could tumble down from.

“That’s not coincidental with the fact that this is a year that’s divisible by four — in other words, an election year. And the administration sees great advantage, perhaps even a necessity to make sure that farmers and rural community members are happy with him,” Logan said. “With the deficits as high as they are, it’s very tough for me to imagine the continuation of these enormous payments that farmers have received.”

Logan said farm country was seeing warning signs of financial trouble before the payments started coming in. Early on, his nonpartisan organization was looking forward to working with the Trump administration on trade because of his organization’s opposition to aspects of the World Trade Organization.

But after nearly four years of experience, Logan believes the administration could have tackled trade in a better way. An analysis by the Peterson Institute found that only 30% of import commitments for the year in the “Phase 1” trade deal between China and the United States had been met as of August, according to Chinese import data.

“But what I worry about is the future of American farming, having relied upon that Chinese marketplace for 40 years, and suddenly it seems to be all but gone,” Logan said. “And most people believe that that is a marketplace that will not return for American farmers largely because Brazil has such enormous productive capability.”

He said members of his organization are ultimately split on whether to continue with Trump’s tough trade policy on China, or to take a new direction. He adds that unless expectations for international trade are re-balanced or the farm safety net is re-engineered, the upcoming years for agriculture could be stormy.

Farmer Fatigue: Farmers Grow Weary Of Trade War, But Most Stick With Trump