ATHENS, OH – When Brian Miller graduated from Ohio University in 1995, he got in his car and drove to Los Angeles without a job to start knocking on doors in pursuit of his Hollywood dream.

“Having the ability to get that real-world experience in college from WOUB, it gave the confidence to come to Los Angeles and try to get in the business,” said Miller. “Without that experience, I wouldn’t have felt I could walk into a place and say ‘Hey, I can do that job.’”

Miller grew up in Columbus and chose Ohio University largely because of WOUB.

“I started working at WOUB in the fall of 1991, right as soon as I got on campus,” said Miller. “The ability to do that was one of the things that attracted me to apply to the university.”

During his time at WOUB, Miller worked on-air and in production. His passion was videography, and he took advantage of every opportunity given to him to learn and grow. 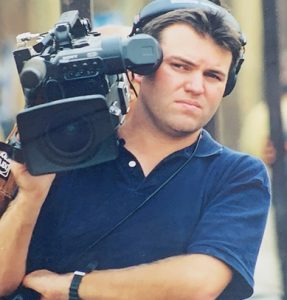 “The exciting thing about working there when I was student was that there was this mix of professional staff alongside the student staff,” said Miller. “You had people like Fred Kight, Connie Stevens and John Ray. To be able to work with these people, who had been in the business for years, and know they were willing to teach you was amazing.  As long as you showed interest and dedication, these people were willing to teach you everything they could about the business, and they were invested in making sure you were successful.”

When Miller arrived in LA, he landed his first job at Channel One News. The program was broadcast in middle and high schools across the country and provided news programming and educational content.

“I was excited to work on a show which served an audience that I was still somewhat close in age to and knew the importance of educating students during these very impressionable years about news and history,” said Miller. “During my 11 years there, I covered stories in 40 different countries and across the United States. I went to the Olympics, covered the AIDS epidemic in South Africa, the Asian Tsunami, the death of Princess Diana, the refugee crisis in Kosovo and many, many other big stories.”

After leaving Channel One, Miller started his own production company and started doing freelance work for places like Oprah Winfrey’s Harpo Productions as well as the Bravo network, CNBC, CNN, Discovery Channel, Fox Sports and MSNBC. He also did local news work with KABC (ABC affiliate in Los Angeles) and programming work with KCET (PBS SoCal).

“Working at WOUB prepared me for everything I have done,” said Miller. “In southeastern Ohio, WOUB TV and Radio was the source for news and information in that region. The service we were providing was incredibly important for that community. It wasn’t playtime. WOUB was a real TV and radio station with a real audience that relied on the programming and information that we were providing.”

WOUB Prepares Students for a Variety of Career Paths