ATHENS, OH – Growing up in Cleveland, Ohio, Mark Hug knew he wanted to do something with media and sports. But he wasn’t quite sure what.

“I was looking at colleges that had production and journalism majors,” said Hug. “When I visited Ohio University, I discovered WOUB and saw that you could get hands-on experience there and try things out. I wanted to do more than just take classes. Getting experience and learning was an important part of college for me.”

When Hug started at Ohio University in the fall of 2006, he went to the WOUB volunteer meeting and learned about WOUB’s high school football program, Gridiron Glory.

“I knew I wanted to work on Gridiron. But I didn’t do it right away. I wasn’t ready to give up my Friday nights during my freshman year in college,” said Hug laughing.

Hug started with Gridiron his sophomore year. He started working as a cameraman and fell in love.

“I realized that being behind the camera was where I wanted to be,” said Hug. “I tried being on the air, anchoring radio sportscasts, but it wasn’t for me. I stayed working on Gridiron and then started working some technical crew positions on Newswatch.”

Once Hug graduated in 2010, he returned home to Cleveland and started doing freelance work. 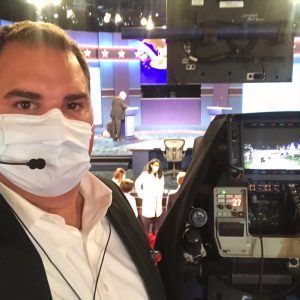 “I started working a local high school football show in Cleveland. Then I worked the Cleveland Indians scoreboard crew, and eventually I started filling in when they needed people on the Indians television crew,” said Hug. “One thing led to another and now I’m a freelancer listed with several television crewing companies.”

Sometimes, Hug gets called to work on crews not related to sports. Recently, he was asked to work the presidential debate in Cleveland.

“That was an amazing opportunity,” said Hug. “I’m living my dream job. I wanted to be a cameraman for sports, and I get to do it, along with some other really cool stuff.”

“I wouldn’t have been able to do this without WOUB. It was an opportunity to figure out my niche and try out different parts of the production crew. It gave me the chance to get my feet wet, make mistakes and figure stuff out. WOUB was a great experience.”