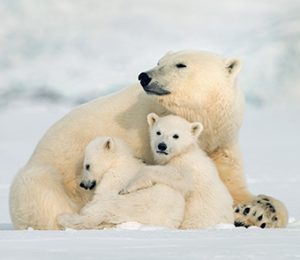 Set against the harsh backdrop of the Arctic, Nature: Snow Bears is a dramatized story based on the extraordinary adventures and life-changing journey of newborn polar bear cubs as they leave the safety of their den for the first time. Bravely led by their mother, the cubs must make the perilous 400-mile trek to the sea to feed. Encountering many dangers and adventures along the way — marauding male bears ready to kill, extreme weather, Arctic foxes, Walruses, Narwhal, snowdrifts and ice cracks — they undertake an epic survival challenge. These cubs are rarely seen in their natural habitat, and this is a unique glimpse into their world. Kate Winslet narrates.

Noteworthy Facts:
• After months of winter hibernation, the return of summer to the Arctic means that polar bears must make the 400-mile trek to the edge of the ice surrounding the North Pole. This area is abundant with seals, their favorite food. Timing for the journey is crucial

– if they don’t leave the island in time, the sea ice will be gone, which means they could be marooned for the summer.

• Adult bears can travel up to 50 miles a day, but for cubs even 10 miles is a struggle. At three months old they need six rest breaks a day Adult bears can also swim up to 60 miles nonstop, but not the cubs.
• Arctic foxes get through the winter by scavenging for scraps and surviving on their food stores. They tend to eat the leftovers from a polar bear’s kills.
• Polar bears can smell seals under three feet of snow. Hunting requires precise timing and experience – only about one in ten hunts is successful.
• The North Pole is populated with diverse creatures such as narwhals, walruses, and seals. They migrate to the region during summer when fish are abundant.

• Before the mother and her two cubs can begin their journey, two large males, searching for a mate, approach the family. Since males sometimes kill cubs so they can mate with the mother, the mother must defend herself. The two males fight for the mother’s attention, and during the distraction she slips away with her cubs.
• Courting males will sometimes stalk females for many weeks; this family must escape from several more encounters throughout the trek. One tense scene shows a male pursuing them up a steep cliff. Near the summit, the family becomes trapped, but the mother wins the fight by pushing snow onto the male, causing him to slip and fall away.

• The summer melt has arrived early – an increasing problem in recent years. With the sea-ice vanishing, the polar bear family’s chances of getting safely to their destination become slimmer. They must pass through one of the most dangerous parts of the journey – the glacial fjords. Thousands of tons of glacier create a wall of water around the sea ice, and the heat makes them increasingly unstable.
• Bearded seals weigh around a quarter of a ton and are a prized catch for polar bears. The mother bear stealthily attempts to sneak up and catch the seal. Approaching without being spotted is crucial, and she is on high alert since previous hunting efforts have been thwarted by her cubs’ movements and loud noises.

Mother Bears Are Staying With Their Cubs Longer, Study Finds