What a year 2020 was! Since it is doubtful anyone even believes in linear time anymore, it seems fitting that WOUB Culture is rolling out our Suggested Listening feature in January (and February) instead of December. The world is a hard place, and aren’t we all so grateful to have music to make it a little more bearable! 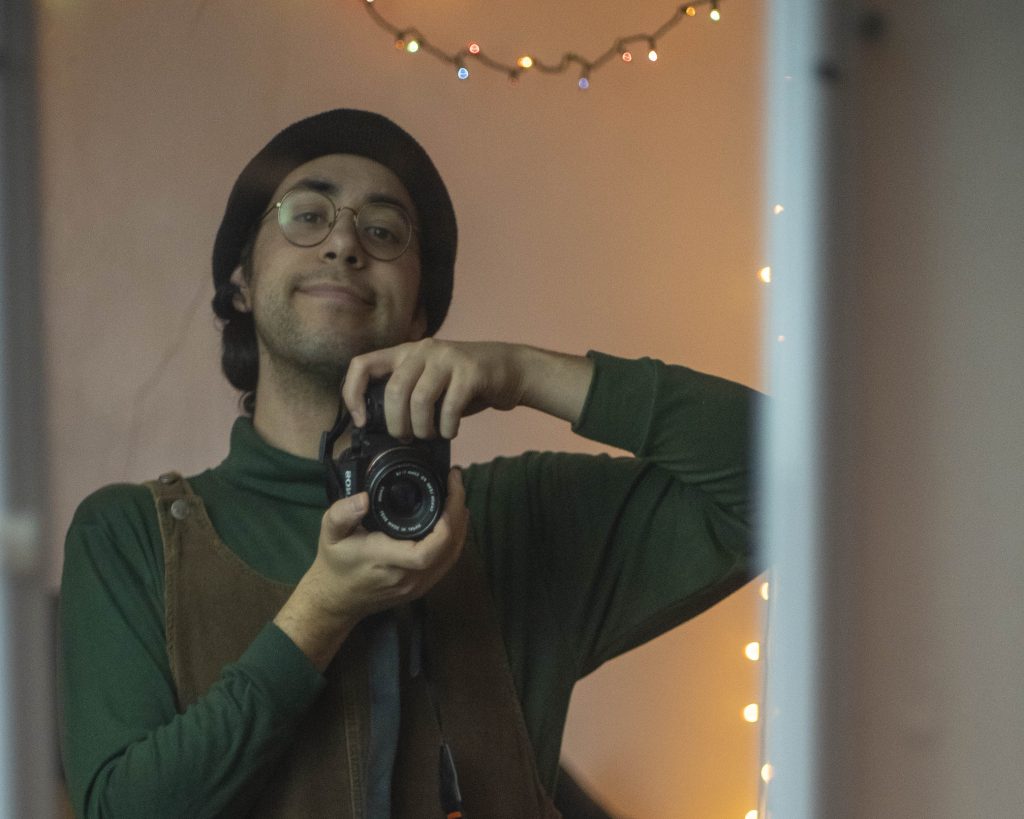 Dani Wasserman is a 24-year-old Athens local, filmmaker, and musician studying Integrated Media and Film at Ohio University. They have been active in the Athens music scene as an artist since 2018 in Sweat Workers and Takata Airbags, as well as the solo act Glass Frawg. Dani is currently a student reporter for WOUB Culture.

2020 was, for me, a year of comfort music. Thanks to the unending onslaught of sorrow that it was, I found myself wanting more than anything, to hear music that took me away. Either to past memories of less stressful years, or to some ethereal abstract plane of an emotion I can only describe as “floating.”

Because it never fails on either accord, the album I found, and continue to find myself coming back to most often, is Stratosphere by Duster. I was first turned onto this dreamy classic actually by a WOUB top tunes list by OU alumn Hiatt Hernon in 2017. I recall Hiatt describing it as his “October album” that year. This was absolutely my October album in 2019 and as the months, and then year, and then following months rolled over, I seemed to just never want that October to end.

Whenever I’m looking to be brought to the brink of a mid-afternoon nap and then -for lack a better word- just vibe this is the record I put on.

A band who had already shown themselves to be a steady, dynamic, and competent indie-rockin-good-time have now pushed themselves further, and have grown for it.

On Waterfowl Frankie Valet moves effortlessly through genre and tone. Smoothly sliding out of the gate with the spacey Nakid we get a masterful slow build to the shoegaze-y chorus “everyone is speechless from afar” here they show off every aspect of why I loved their sound from the first time I saw them at a house show in Cincinnati.

There are plenty of more great shoegaze moments like the would-be title track “Water Foul” and some post-punk bangers like “Engulfed.” On “Our Apartment” the band even pulls off a delicious folk-punk-inspired nugget of a track. With gang vocals to punctuate a melancholy narrative about moving on and looking back, this one gets stuck in my head on a regular basis and I never mind one bit.

This spot almost went to Black Marble’s 2016 release It’s Immaterial until, upon a re-listen, I realized I actually listened to Bigger Than Life far more in 2020. I love this record so much and I honestly feel that it is just Black Marble at their best. This album makes me feel like I’m moving somewhere fast on a train in a city with a really robust public-transit system. How I always want to feel honestly.

All the songs on this record sound similar, in the best way I can possibly mean that. Sometimes I want to be in that one specific mood for forty minutes and that’s when I listen to this album. The beats and synths all feel like they’ve been sucked right out of 1984 but at the same time they’re clearly crafted with a modern synth-pop sensibility. Not nearly as bombastic as they likely would have actually been in 1984 a la Depeche Mode. Black Marble is precisely what results from ’80s nostalgia being filtered and echoed through the tunnels of time which stretch from then to now.

Melancholy lyrics paired with solemn liquidy synthesizer melodies all atop the driving bass and drum machines. All together it paints a picture of a time gone by, lines like “I used to have a radio show/ with not a lot of time though” conjure memories of not only a time before the internet, but also makes me feel some sweet nostalgic feeling I can’t easily describe. It’s just warm and cozy.

As soon as I had to come home from my study abroad trip in London last March (I still can’t think about it too much or I’ll tear up) one of the immediate things I knew I could do to keep myself happy was to catch up on all the cartoons I have been sleeping on. One of the most joyful of these was Steven Universe. And after finishing the first-time binge of the series, the music from those early season episodes kept me going throughout the rest of the year. I keep saying that Steven Universe is my favorite musical now. It’s true! The show knows how and when to use music perfectly to move the narrative along, develop its characters such as the heartbreaking “It’s Over, Isn’t It,” and pay-off big moments with tracks like “Stronger Than You.”

The brilliantly adorable songwriting of show creator and former Adventure Time writer Rebecca Sugar (She wrote some of the most beloved tracks from that show too) are carried out perfectly by the diverse cast of the show. The instrumentals range from punk rock to chiptune and a nicely tempered nu jazz spirit flows through the whole thing. Many people, like myself, likely won’t find this album fully enjoyable without having watched the show, but even a quick listen should demonstrate why it’s worth watching, for great music and so much more.

I hesitated to even include this, knowing it has been on nearly every best of 2020 list I’ve seen so far, but I just couldn’t hold back. The only reason it doesn’t rank higher for me, is that I discovered it late.

Like many others I’m sure, when I first heard “Kyoto,” I was hooked and could not stop playing it on repeat for days. But right now my favorite track on this record is probably “Halloween.” The lyrics are fittingly haunting, the poetic concept of uncovering truth through disguise, a relationship dwindling like once vibrant flowers in the autumn. Chills. Here Phoebe Bridgers really lets her Elliott Smith influence bleed through her songwriting even more unapologetically than usual. So much so that by the end of the track with the male back-up vocals coming in on the refrain “be whatever you want” the familiar chord progression and melody almost briefly summon the ghost of Smith on this creepy haunted track.

From this point on I want to focus on individual songs that got me through 2020, partially because I just didn’t commit myself to as many full albums this year as I usually do, and partially because these songs deserve full attention of the following blurbs.

First up is my number one most streamed song on Spotify in 2020. “Believe,” by Cher.

I don’t feel like I have to explain why I love this song because I don’t know anybody who doesn’t love this song. I set this as my alarm every morning starting back in like, May or June I think, and ever since then it has gotten me up and ready for the day. It’s like, because I love sleep so much, and I have to believe in life after waking up every morning. It’s great, it does the job.

For the entirety of the year that I wasn’t waking up to “Believe,” I was getting up to “Andromeda,” the opening track off of Weyes Blood’s 2019 album Titanic Rising. This song is pretty, spacey, belty, dramatic and unashamed. Which was everything I was trying to embody last year. Not sure I succeeded, but I sure do love this song.

Okay this is kind of a joke but kind of not. This is definitely the dumbest pick on my whole list and why it’s only number eight. If you liked 100 gecs but you feel like it needs to be about 30 percent dumber this song is for you.

Born of the collaboration between hyperpop producers Fraxion and literal child of pro skater tony hawk, Gupi this energy drink fueled auto-tuned party of a song emits pure zoomer energy. It’s almost comedy when we get the hook “I go to target/CVS at night” The track reveals itself to be a melancholy recollection of bygone love and the hole you feel inside when that special someone no longer joins you on your late night outings to the aforementioned Target/CVS.

Something about that just resonates with me in a way no other art ever has, and for that, I have to acknowledge its one of the most interesting songs I heard last year.

This is the kind of lyrical content that I think only works for me in the context of a track like this. Carli is at her best when surrounded by the competent and talented production of people like PC Music founders A.G. Cook and Danny L. Harle, as well as Dylan Brady of 100 gecs who produced this track.

Brady brings what works about 100 gecs and marries it effortlessly with what works about Charli. Caging her bittersweet lyrics about being stuck in quarantine with the genuine love of your life in distorted dial-up-esque bitcrusher distortion and keeping the sonic space around her repetitive and catchy melody dynamic and varied enough to keep it interesting and building through the track’s 2:29 second runtime.

As bad as 2020 was, I was incredibly lucky last year. I got to spend the start of the year in London, England on a FIne Arts study abroad program, spending all my time going to museums, seeing plays, films, and of course lots and lots of live music. It was devastating to have to leave the UK early and miss out on all the events that were planned to attend there in March and April I feel incredibly lucky to have experienced so much live art before spending what will soon be more than a year with none.

One of the last acts I had the pleasure of seeing was Sleater-Kinney, and their opening act (and touring guitarist), Harkin, caught me off guard.

Katie Harkin is a skillful singer-songwriter-guitarist. She makes the kind of thoughtful indie rock that might not seem “unique” at first but to me that doesn’t make it any less valuable. Regardless I can’t say that I don’t love this song. The chorus “It’s been a decade” is such a melancholy reminiscence and I’ll never forget the feeling of listening to this song on the London underground last February thinking about how strange it is to grow older, and feeling like 2010 is a year I remember so vividly and freshly, while simultaneously reckoning with the fact that it is now over a decade ago.

At the time 2020 was already a surreal year for me, and I had no idea how much stranger and scarier it was about to get. Now as those soft synths fade in over a beautifully simple guitar part, this little track about reminiscing will always take me back to that weird place of reminiscence. Like a chain reaction of nostalgic moments.