Eunice Hunton Carter and her family were “unsung heroes” in social justice movements in the early 20th Century and now her life is brought into focus by a new biography, “Eunice Hunton Carter: A Lifelong Fight for Social Justice,” published by the Fordham University Press.

Co-Author and noted biographer Marilyn Greenwald highlights the many accomplishments of Carter. She was the first black woman prosecutor in the Manhattan Prosecutors Office in the 1930’s.

While trying her cases, Carter established the link between organized crime and prostitution, according to Greenwald. Carter used that information to be the only black woman and black attorney on the team of attorneys that convicted mobster Charles “Lucky” Luciano in 1936.

Earlier in her career, Carter was a writer and was active in the Harlem Renaissance. She wrote short stories and art criticism, says Greenwald.

Later in her career, she consulted with the United Nations and promoted causes for women on the global stage, Greenwald notes.

Carter’s family also was quite active in social justice causes. Her grandfather was a slave who purchased his freedom, moved to Canada and became a wealthy businessman.

Her father was a top official for the YMCA and devoted two decades of his life to integrate YMCAs in the South, says Greenwald.

Carter’s mother was a major pivotal figure in the Black Women’s Club movement and she even traveled to France during World War I to assist black soldiers.

The new biography of Eunice Hunton Carter will be out in April 2021, but it is available now through “pre-order” at Amazon and Barnes and Noble. 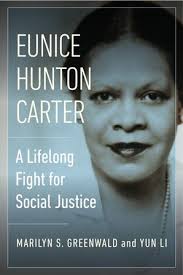 What Is A Dinosaur And What Isn’t?

Great Performances at the Met: “The Gershwins’ Porgy and Bess” Coming Friday, July 17 at 9 p.m.