ATHENS, OH – When Kelly Brennan started as a student reporter working at WOUB Public Media, she didn’t fully realize the power of the skills she would learn. Now, as a mother who is helping her three-year-old daughter fight a rare autoimmune disease, Brennan is using those storytelling skills to share their battle and help other families going through the same thing.

“Being able to share our story has helped me so much,” said Brennan. “And I’m so glad it’s helping others at the same time.”

Brennan came to Ohio University from Pittsburgh in 2006. She had an interest in journalism and was drawn to broadcasting and sports reporting.

“When I visited Ohio University for the campus tour, I immediately felt it was my next home. I was so comfortable there,” said Brennan. “I knew there was a great journalism program and then when I saw WOUB, I knew Ohio University would be a good fit.”

She started working at WOUB in the fall during her freshman year. Brennan quickly got involved with WOUB’s high school football program Gridiron Glory, where she eventually became a feature reporter. Brennan told the inspiring sports stories off the football field that involved players, their families and their schools.

“I knew I was drawn to storytelling. I was drawn to interviews, writing, editing, and video,” said Brennan. “The whole thing gave me an adrenaline rush.”

During her junior year, Brennan started doing news reporting as well. She was exploring all kinds of storytelling.

“I learned so much during my time at WOUB,” said Brennan.

After graduation in 2010, Brennan got a news reporter/weekend producer job at WOWK serving Charleston/Huntington, West Virginia. She worked there for about two years before moving home to Pittsburgh. Brennan worked as a freelance reporter at WPXI and then was hired as a full-time reporter at WTAE.

“I loved what I was doing. But in 2017, I was pregnant with our second child and was due at the end of November, which was the same month my TV contract was ending,” said Brennan. “I felt it was the right time to step away. I had this grand plan of staying home with my two children under the age of three for about a year and then life happened.”

As a newborn, Brennan’s second daughter, Caroline, cried all the time. There were many issues and doctor’s visits.

“I started blogging and posting on social media platforms about the challenges we were having with my daughter. I was getting tips from other moms, which was so helpful and also gave me connection and purpose,” said Brennan. “It evolved into a full-time blog which then got a sponsorship. I felt drawn to blogging because it was a schedule I could control, and I had creative control. I could tell stories about women and children and their health, which are the most important stories I’ve ever told.”

Everything was going well for Brennan, but then it all changed in September 2019. Caroline was diagnosed with juvenile dermatomyositis (JDM). JDM is a rare and life-threatening autoimmune disease, in which the body’s immune system attacks its own cells and tissues. Weak muscles and skin rash are the primary symptoms.

“Caroline had the red rash on her face, hands and knees, and we thought it was allergies. We were switching up lotions, soaps and detergents, but then she started to get weak,” said Brennan tearing up. “At one point, she couldn’t stand up because she spent most of her day on the couch. She would sit there for hours. Caroline was hurting. She wanted carried all the time. She couldn’t walk up steps and choked a lot. Every muscle was inflamed.”

There is no cure for JDM, and there are no medications that are FDA approved for Caroline’s disease. 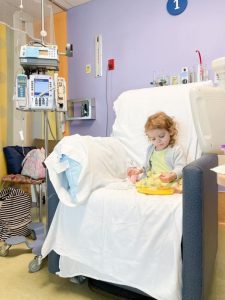 “We started as aggressive of a treatment as was possible,” said Brennan.

It involved high dose intravenous steroids which meant Caroline, who was only two years old at the time, had to get frequent infusions. Brennan blogged about the experience.

“It was awful,” said Brennan. “She cried and screamed and had to be pinned down, and I couldn’t find a way to explain things to her or anything that would help prepare her that was understandable to a toddler.” 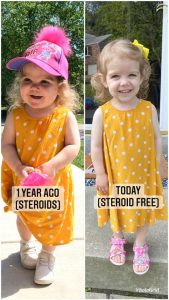 That’s when Brennan put her storytelling skills to use in a new way. She wrote a children’s book about infusions. Caroline’s Infusion Day is a 32-page book which goes through what happens from sunup to sun down during an IV infusion day. Brennan’s 15-year-old niece created the illustrations. The book is expected to be released this summer.

“With this book and my blog, I feel like I’m providing information about a disease and a process that can help others out there going through the same thing,” said Brennan. “There was a woman whose daughter was suffering, and she was scouring the internet looking for information. She came across my blog and told me she instantly knew that this was her daughter’s story too. I was able to talk to her and answer questions, and we have stayed in touch.”

“Caroline is a different kid now than she was 20 months ago. You don’t see the disease,” said Brennan. “And I have found a real purpose in my storytelling. When you’re in school or pursuing a career, you don’t always have to be glued to that one title. I learned being at Ohio University and WOUB all aspects of journalism. Because of that, I’ve been able to transition in life personally and in my career. Wearing multiple hats and changing those hats is important to be able to grow.”

ADA25 Celebration Series to Kick Off in October

What is driving the disparities in vaccine distribution?