On May 23, 2020, Brandon Thompson (DJ B-Funk) had the following text exchange with Michael Bart (DJ Barticus) about one of Bart’s upcoming virtual (and WOUB presented) dance parties on Twitch:

DJ Barticus: “Are you booked next Friday night?”
DJ B-Funk: “I am not. What are you thinking?”
DJ Barticus: “came up with a theme you would love and thought it would be cool to have you open eight to nine, all bangers. That’s the theme.”

Thompson agreed, and thus, Bangers With DJ Barticus and DJ B-Funk was born.

You may be asking yourself “Well, what is a banger?”

Simply put, every banger is a song. Crucially, however, not every song is a banger.

According to the crowdsourced, online Urban Dictionary, one can perform a simple litmus test to figure out which songs are bangers and which aren’t: “If a song is extremely tight or just unbelievably awesome. It is a banger.”

If a song is not “extremely tight or just unbelievably awesome,” it is not a banger.

Over the years, both DJs have had enormously popular DJ nights, such as DJ B-Funk’s Dave Rave and DJ Barticus’ Dance Or Die. Naturally, the two friends tried a number of things to bring their events together, such as holding events directly next to each other with a shared cover; or even sharing the honor of opening for Juicy J – only to have that experience diminished by poor weather and technical difficulties. Using “bangers” as a theme finally provided just the opportunity for that long awaited collaboration to materialize – even if it had to take place virtually (at first) because of the COVID-19 pandemic. 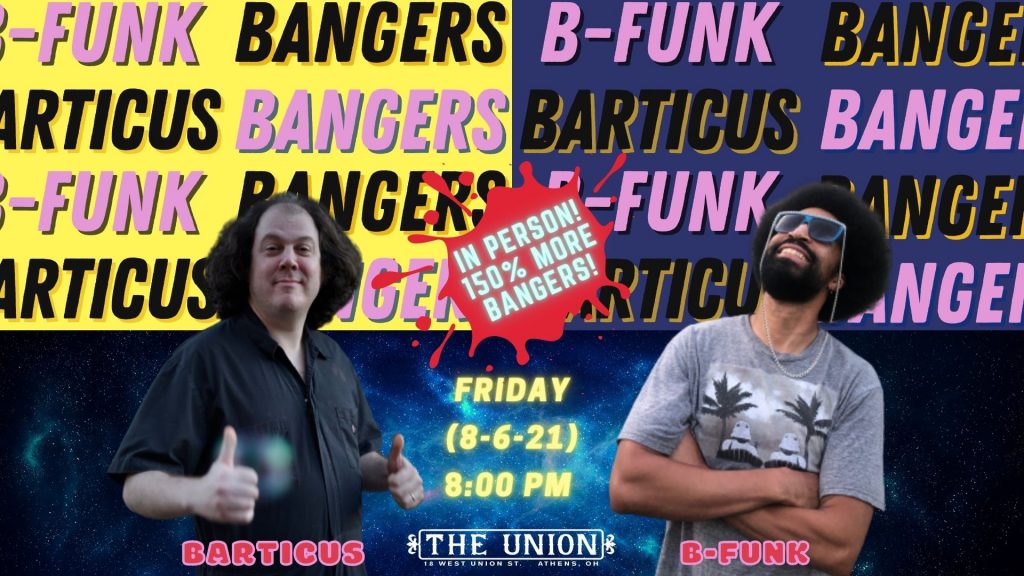 “(Bangers) was born as an online event, and there’s lots of people who tune in that are not able to be in Athens, so we’re still going to broadcast this on Twitch. We’re trying to find a way to maybe project what is being said in the chat room somewhere inside of The Union, so there’ll be some sort of connection between the online virtual events and the real event,” said Bart. “That’s one of the things that everyone who’s been doing virtual events and is moving to real life events is trying to figure out — how to blend both together. I hope that they’re not going to be separate experiences, that there can be some kind of unifying between the two.”

Thompson said it’s important that those who want Bangers With DJ Barticus and DJ B-Funk events to continue show that they feel that way by making an appearance — even briefly — Friday night.

“It’s too easy for people to not support things that they like. Just show up for a little bit, seven o’clock is pretty early, so you maybe just finished dinner and you can come and just hear a song. This is one of the few times that I ever take requests!” said Thompson.

Not only will DJ B-Funk be taking requests during IRL Bangers, he’s also asking the audience to step in and let the DJs know if they’re capitulating to a certain shared proclivity Thompson noticed emerging while watching recordings of the virtual Bangers With DJ Barticus and DJ B-Funk events.

“(People usually think) ‘I don’t tell the DJ what to do,’ but this is the one time I’ll be like, ‘Hey, you know what, tell us to stop on this because it has been a theme where we just get caught up in Kanye West bangers,’ especially late in the event. And I know it feels amazing for me and Michael, but I guess I just want people to feel free to step in if we get too far down that road,” said Thompson.

While Thompson and Bart will do their best to not delve unduly into Kanye West’s enormous trove of bangers Friday night, the fact that their doing so became a theme during the virtual events is just more proof of the tight-knit relationship the two DJs have fostered.

“When Michael and I would do other stuff, it didn’t feel super spontaneous because we never had a theme, really. It was just like party music. But with bangers, it’s almost like this call and response where I’ll play something and then I throw it to Bart and then he plays something similar. We go all over the place. That’s how The Cranberries crept up on our show so many times, cause it’s like that music has like energy to it, you know?” said Thompson. “When Barty and I get together, you’ll hear The Cranberries and Kanye West and the theme song to Succession all on the same night — and it’s all gonna make sense.”

Doors for Bangers with DJ Barticus and DJ B-Funk open at 7 p.m. Friday, August 6 at The Union.

Kentucky Lawmakers to Take up 1-year Budget Due to Pandemic

Authorities: Man Bit Off Part of Trooper’s Ear in Struggle

WATCH: What This Global Health Expert Sees In States Where COVID-19 Is Surging