ATHENS, OH – Megan Vanselow has a Joe Burrow LSU jersey hanging on the wall in her home in Texas. She says the jersey always reminds her of the wonderful learning experience she had as a student reporter working at WOUB Public Media. Burrow was the quarterback at Athens High School when Vanselow worked on WOUB’s high school football program, Gridiron Glory. Now, he’s a Heisman Trophy winner and the quarterback of the NFL’s Cincinnati Bengals.

“Joe was a finalist for Gridiron Glory Player of the Year and didn’t win that year,” said Vanselow laughing. “We all joke that today he has something hanging in his locker about the fact that he didn’t win and uses it as a motivator.”

“I feel like a lot of people have this story,” said Vanselow. “My dad forced me to apply because he knew I was interested in journalism, and a friend told him Ohio University had a great journalism school. When I got accepted, I still wasn’t excited about it. But my parents convinced me to just go visit and see. Once I got to Athens and experienced campus, it was a pretty quick decision.” 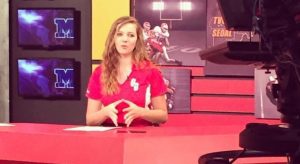 With dreams of being a television sports reporter, Vanselow found her way to WOUB. In addition to Gridiron Glory, she also anchored sports on Newswatch, worked on Hardwood Heroes and even went outside of sports, doing some TV news reporting.

“I learned so much at WOUB, including how to use industry-standard systems and equipment,” said Vanselow. “I see people joining our news station now, and they don’t know how to use the equipment or news software. I felt like I was ready for my first job on my first day out of college.” 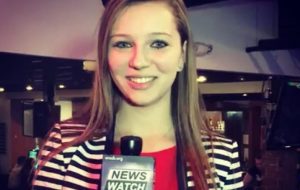 Vanselow graduated in 2017 and took a job at Root Sports in Pittsburgh, which is now the AT&T Sports Network. She worked in the production truck for Pittsburgh Pirates and Pittsburgh Penguin games and curated content for social media accounts. But Vanselow wanted to live near her now fiancé, who was working in Athens at Ohio University, so she applied for a news reporter position at WTAP TV in Parkersburg, West Virginia and got it.

“I think it was huge that I was able to also learn news in college. Because I had that news experience, in my interview, I was able to talk about the news I did at WOUB, and it wasn’t foreign to me,” said Vanselow. “In college, I thought I really just wanted to do sports, but it only took a few months in my job at WTAP, and I fell in love with news.”

Eventually, Vanselow was also able to use her sports skills at WTAP. She got to do some sports reporting and anchoring, in addition to her news work. Vanselow got the opportunity to interview TNT Sideline Reporter and former WOUBer Allie LaForce when LaForce gave the commencement address at Ohio University in 2018. 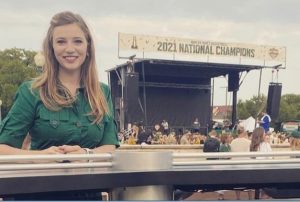 In April of 2019, Vanselow accepted another news job as a multimedia journalist in the Temple, Texas Bureau for KWTX News 10 based in Waco.

“I mostly do news reporting, but I get to cover Baylor University sports and reported on their run to the national championship this past season. I also get to report for the high school football show here,” said Vanselow. “And I always carry the lessons I learned from Gridiron Glory into that work.”

Vanselow says she’s forever thankful to WOUB for giving her the opportunity to try everything because she had no idea the different opportunities that would come up in her career.

“It’s important to have a deep basket of skills, and I had the chance to develop those in college at WOUB.”