Former WOUB Student Finds Her Way Back to The Windy City

ATHENS, OH – Growing up in Chicago, Karli Bell was a high school athlete who knew firsthand that sports could make a difference in the lives of young people.

“I played basketball and loved it,” said Bell. “Sports saved my life. I was shy and sports helped me be able to make friends. Sports matter, and I know how impactful they are. I knew there were hundreds of other kids that felt just like me.”

Bell’s original career goal was to become a basketball coach. But, after suffering several injuries and concussions, that dream was shattered.

Bell and her father started researching broadcast journalism programs at colleges around the country, and Ohio University kept popping up.

“My grandparents took me to visit Ohio University in the summer, and the moment I walked on campus I loved it,” said Bell. “I learned about WOUB and realized this was a place where I could get involved as a freshman. I knew I wanted to get that hands-on experience as soon as possible.” 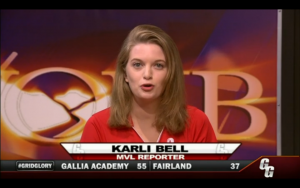 “I did everything in that newsroom that I could,” said Bell laughing. “I was a reporter for both news and sports. I produced and edited. I was sports director during my senior year. I wanted to have the skill set that let me apply for any job I wanted in this industry.”

Bell graduated in December of 2015 and kept working at WOUB while she was looking for a job.

“Unfortunately, I wasn’t getting any responses from the places I applied,” said Bell. “I went down to WOUB General Manager Mark Brewer’s office and asked him to look at my stuff and tell me what I was doing wrong. He looked it over and was very honest with me, telling me that I was applying for jobs that I didn’t have the experience to get. That was a big reality check and helped me change what I was doing to get my first job. I am forever grateful for his honesty.”

In June of 2016, Bell started her first full-time television job as a sports reporter and anchor at WYMT in Hazard, Kentucky.

“Coming from Chicago, Athens was the smallest town I had ever lived in until I got to Hazard. So, it was a culture shock,” said Bell. “But I learned and grew and am so glad to have worked there.”

After two years in Hazard, Bell got a job a little closer to home as a weekend sports anchor in Springfield, Illinois.

“I just couldn’t be far from home anymore. My dad’s health wasn’t great at that time, and I had missed weddings and huge life moments for my siblings,” said Bell. “I just knew I couldn’t be that far anymore. Springfield worked because my dad’s family lived in the area, and it was like a second home.”

While she enjoyed knowing people in town, Bell was starting to feel like she needed to make a shift in her career. Her station was cutting jobs in the sports department and leadership was telling her that local sports didn’t matter to the viewers.

“I knew sports mattered, and it upset me that the stories I was telling weren’t being valued by people at the station,” said Bell.

“It was the perfect job for me because it was on the digital content team, which I believe is the future of sports coverage, and I got to go home. WOUB taught me the importance of networking and making connections to people in the industry. I never thought I would be able to be in Chicago, in sports, before the age of 30.”

“I’m so thankful to the WOUB newsroom. It helped me discover what I wanted to do and gave me the resources to push myself. I made connections and got professional advice. WOUB kids are built differently. We were the creative weirdos from high school who didn’t have a creative outlet. Then when we got to WOUB, we all realized that we came to a place where there was that creative outlet, and we got to be weirdos together,” said Bell laughing.