ATHENS, OH – When Lorie Bowen Llorens was a little kid, you could always find her playing “news” in the basement of her Louisville, Ohio home.

“I had a news desk, and I would write myself news scripts,” said Llorens laughing. “Then I would pretend I was anchoring the news.”

In high school, she was on the yearbook staff and took AP writing classes.

“One day, I think it was during my junior year, my yearbook teacher pulled me aside and told me that I should pursue writing as a career,” said Llorens. “I hadn’t really thought about it before, but that made sense. So, I started researching schools that had good journalism programs, and Ohio University was the only place to go.”

Llorens applied to three colleges, but Ohio University was her first choice. In the fall of her senior year, she was on pins and needles waiting for the acceptance letter to come. Her friends who applied to Ohio University were getting their letters, but Llorens’ letter was nowhere to be found.

“I was so nervous and upset. I was experiencing a lot of turmoil and anxiety. Going to Ohio University meant everything to me,” said Llorens. “Turns out my mom had intercepted the offer letter when it was in our mailbox and didn’t give it me! She bought all the stuff for my dorm room, rolled up the offer letter in a scroll and wrapped it up as a Christmas present. I didn’t know that I got into Ohio University until Christmas! I was super happy and super mad at the same time.”

Once Llorens arrived on campus, there were no more delays for the broadcast journalism major. She got involved in the Radio and Television (RTV) Building quickly.

“I got involved with ACRN first, but, as I spent more time in the RTV building, I learned about WOUB,” said Llorens. “I went to the WOUB orientation meeting, met three people who are still my best friends to this day, and got started. I began writing and reporting for radio, and eventually co-hosting WOUB FM’s Afternoon Edition with John Ray. Then I jumped into television and did it all – ran teleprompter, camera and served as floor manager and reported for and co-anchored Newswatch.”  She also took a part-time job producing and recording station and public service announcements for WOUB/WOUC TV.

Llorens worked as part of the WOUB summer staff in 1987, and it was an experience she will never forget.

“I stayed off-campus in a house on Stimson. My best friend, Lisa Weiss, also was part of the summer crew,” said Llorens. “While there was still a lot of news to be covered, there was a more relaxed feeling in the building and on campus in general. We were one big family, WOUB staff and students, from the production crew to the news crew. Summer was a great time to refine and broaden your skills and experience Athens like a ‘townie.’”

Llorens graduated from Ohio University in 1990, and then the job search began. 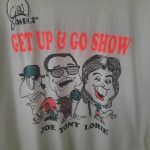 “I plugged away looking for a job for nine months,” said Llorens. “It was a different job market in media back then. While I was looking for a job, I did internships to keep my skills sharp, and I didn’t give up. I knew I wanted to live by the beach, so I targeted stations up and down the East Coast. I made personal calls to news directors and program managers – and called them back every month! Finally, during one of those calls, a program manager at a radio station in Naples, Florida, told me they were going to start a morning show, and they needed a news anchor. I told him to put me on a plane and fly me down there. And that’s how I became the news anchor on an oldies commercial radio station. The morning show was called The Get Up and Go Show.”

Llorens worked there for about two and half years before the station got sold and all the employees were let go. She landed her next job in Chapel Hill, North Carolina, as morning news anchor on an AM/FM news talk station. A few years later, she moved to a station in northern Virginia, where she did a little bit of everything.

“In Virginia, I wasn’t strictly news,” said Llorens. “I ran the board, read news headlines and managed live remotes. The job didn’t really have any of the things I enjoyed about working in radio. So, eventually, I realized I was ready to move on and try something different.”

Llorens started working for a newspaper in Charlottesville, Virginia, and freelance writing for numerous publications. She also did some freelance work for the Associated Press before moving into corporate communications and public relations. Today, Llorens is a communications manager at Alight, a global cloud-based provider of integrated digital human capital and business solutions, based in Lincolnshire, Illinois.

“I still use all the skills I learned at WOUB because broadcast skills are needed in the corporate world,” said Llorens. “Knowing about video and audio production helps you stand out in your career. It really sets you apart. It gives you an edge. I would encourage current students to take advantage of every opportunity to learn. Even if you think you are not interested in some aspect of the business, get a taste of everything WOUB has to offer because you never know how and where that knowledge is going to come into play during your career.”