ATHENS, OH – Danielle Frizzi-Babb started her career in media with an interest in television news as a student at WOUB Public Media in the late 1990s but parlayed that experience into a position as the director of communications at the Ohio Lottery.

“When I decided that I wanted to pursue journalism, Ohio University was really an obvious choice because the journalism program had such a great reputation,” said Frizzi-Babb. “My dad is an Ohio University alum, so my family had visited campus many times before. There are photos of me in Bobcat gear even as a kid, so I guess it was just a given that I would choose to go there!”

Frizzi-Babb grew up in Bellaire, Ohio. She said because it wasn’t too far away, Athens and Ohio University felt like home. And once she started working at WOUB, her family could listen to her on the radio and watch her on television, since Bellaire is part of WOUB’s service area.

“When I was on the radio, I’d let my family know to listen to WOUB FM because I was going to read some news today,” said Frizzi-Babb laughing. “They also could watch me when I started on WOUB TV’s NewsWatch. It was really great.”

Frizzi-Babb started working at WOUB toward the end of her third year in Athens. She learned about the great experience she could get from other broadcast journalism students.

“I came up to the newsroom and started working with then-Assistant News Director Fred Kight. The first thing I did was radio and write radio scripts. I remember using carts and the bulk eraser,” said Frizzi-Babb. “It’s amazing how things have changed.”

When Frizzi-Babb graduated in 1999, she got a job as a reporter and weather anchor at WHIZ TV in Zanesville.

“Because of WOUB, I knew how to do everything when I got my job in Zanesville. It took a little bit of the fear out of the first job because I had already been on a set and been in a booth reading a script,” said Frizzi-Babb. “I had also done some work in front of the green screen doing weather at WOUB, and the amount of ad-libbing I had to learn how to do was extremely helpful for anything I did going forward.”

“It was a lot of fun working in Cleveland, and I ran into Ohio University graduates working in the industry all the time,” said Frizzi-Babb. “But eventually we had children, and I wanted a more flexible schedule to allow more time with the kids. So, I started to try to figure out what was next.” 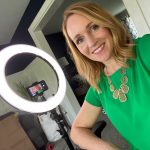 That’s when the communications director position at the Ohio Lottery came along.

“My days now run the gambit of just about anything communications related. I’ve done everything from media relations and press releases to radio voiceover work and visual story-telling,” said Frizzi-Babb. “The great thing about my job now is that I haven’t completely left my TV roots behind. I still do interviews and write stories about winners for our YouTube Channel and website. My department also runs the Ohio Lottery’s social media accounts, and this summer I got the chance to host a 30-minute Facebook Live Event to promote one of our games. It was a real call back to my days in TV.”

Frizzi-Babb says WOUB provided a wonderful foundation for her career.

“Even though I don’t work in a newsroom anymore, the skills I learned at WOUB are transferrable to everything I do today. Whether I’m speaking to a group, producing videos, or being interviewed by a reporter, it all goes back to the confidence I gained from the time spent with the great professionals and even fellow students at WOUB.”

Reporting Skills Learned at WOUB are Vital to Communications Consultant