David Sanders meditates on time, memory, and The Beatles in ‘Bread of the Moment’

< < Back to
WOUB Digital · David Sanders meditates on time, memory, and The Beatles in ‘Bread of the Moment’

We are always in the present.

It’s a mysterious state. We are forever bookended by what we think we know about the present that has already past and by what we anticipate the present might become seconds, minutes, hours, years, from right now. Sometimes this feels like a prison with windows that, upon further inspection, are actually mirrors.

Other times, such as when poet David Sanders writes about our state of being in his most recent collection of poems, entitled “Bread of the Moment,” the fleeting forever in the now is exactly as poignant and impermanent as the freshness of a baguette taken from the oven.

“I remembered a conversation I heard from a baker who talked about how bread begins to get old in a matter of minutes,” said Sanders, referencing the collection’s title. “Over the course of a day, it becomes less and less what it was. These poems are often about memory and the past and how things are overlapped in terms of time. So I thought to that extent, the title ‘Bread of the Moment’ seemed fitting.”

“Bread of the Moment” was published earlier this year by Ohio University’s Swallow Press, consisting of various works by the poet penned (for the most part) over the course of the last 10 or so years. 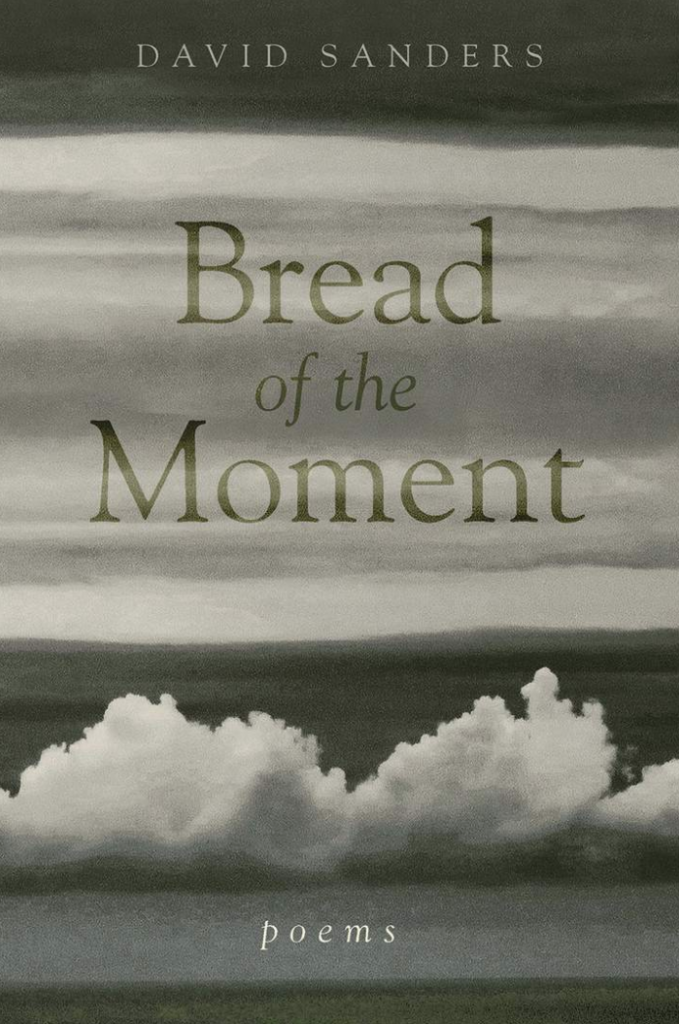 While “Bread of the Moment” is chockfull of beautiful articulations of the fragility of the human experience, one that particularly puts a laser focus on the concept is entitled “Abandoned Nests Exposed By Winter.”

There they rest as if they were
the season’s meager fruit. Once you begin
to notice them, they turn up everywhere
you go, the boulevard or backyard,
the dog walk or supermarket parking lot,
and lower than you might expect—barely
out of reach—braced in the branches
like frozen balls of knotted twine.

They make you think about yourself,
how your productive work was done
out of sight, camouflaged amid
the foliage of years, protected
and incubated, how it hatched
and, fledged, flew off never to return,
and how mollusks, likewise, live
busy and blind along the ocean’s floor
until their tumbling shells wash up
at the braised feet of midwestern visitors,
and then you remember how once those feet were yours.

Sanders gave context for the work.

“This poem came out of a walk on the bike path behind Kroger. I would walk that fairly often, but one time, when the weather was somewhat like this — where the leaves had fallen — I noticed that you could see nests in the trees that you wouldn’t have seen if the leaves were still there. And the more I looked, the more I saw,” said Sanders. “Then I started playing this idea, started wondering ‘okay, what’s the significance of any of this?’ And there was no real significance, except it made me think of how the purpose for these nests is to protect eggs that will become baby birds who will hatch and fly away. So I took that idea and sort of projected it on our own way of thinking about what we do over the course of our lives.”

Another work in “Bread of the Moment” is entitled “Self-Portrait as a Fly on the Wall of Modern History,” and given that it’s dedicated to Chris Pyle and Bill Rawlins, I knew immediately that the poem would at least sort of be about the Beatles. I was right.

Self-Portrait as a Fly on the Wall of Modern History

For Bill Rawlins and Chris Pyle

I would not have overheard the deal they struck,
the smart one and the cute, freezing out
the quiet one, keeping the songs to themselves.
I’d have been grooming my legs to get to the bits
of decaying biomass lodged on those sticky hairs.

The tapping of phones done under crossed cones
of flashlights and the attendant rifling
of files would again have all been lost on me.
The flexing of wings in readiness—one,
now the other—always takes precedence.

And so the flash of conspiring glances, connecting
as the flight attendant examined the boarding passes,
would hold not a trace of interest, obviously.
But at the slapping of the tiled wall below me
by the hand of the child impatient to take off,
viewed through the fixed kaleidoscope
of my oblivious eyes—I’m ready to flee.

The final poem in “Bread of the Moment” is entitled “Morning Sleet.” The work takes place in the same marvelously powerful, yet often flawed spot in our brains where we craft our vision of the past and anxiously knit together what we think the future might be.

You wake up because
you think there are squirrels
in the walls. You can hear their feet.

You wake again as the frequency increases.
The skillet in the kitchen is sizzling
on the stove. You listen.

Finally you rise and see the world is
insulated with a sheet
of ice. Glistening paralysis.

Now you can breathe unafraid.
It’s a better world than the ones you made.

Before Sanders and I ended our conversation, I asked him if he had any theories on why poetry might be more able to accurately depict the fluid nature of time as we experience it. After all, Sanders is an expert, having been the general editor of the Hollis Summers Poetry Prize; the founding editor of Poetry News in Review; the editor-in-chief of the University of Arkansas Press; owner of a bookstore in Fayetteville, Arkansas; director of the Ohio University Press and the Purdue University Press, as well as a former faculty member in the English Department at Ohio University.

“Well, on a very literal level, the fact the matter is that poetry, unlike visual art, which is spatial, which sits on the wall; or music, which is temporal, passing over time; a poem can go from one of those worlds to the other,” he said. “That is, you can see it on the page and know how long it’s gonna be. In that way, it’s spatial. And yet it simulates the expression of talk, of speech — which is temporal. And beyond that, there’s the rhythm of the lines that replicate speech patterns, but have underneath them another rhythm that propels them along. So there are a lot of these elements working simultaneously that make a poem move from the spatial to the temporal — which is one of the the pleasures.”

Sanders has a reading event scheduled for February 17 at Stuart’s Opera House in Nelsonville.