Joey Hebdo of The Muswell Villebillies speaks on the unique legacy of The Kinks with WOUB Culture a few days ahead of Jan. 7 Athens show

The Kinks are, technically, a “British Invasion” band.

That is — if one is coming from a perspective of respect for the kinds of categorizations granted by the U.S. Billboard charts – which the Kinks and the legions of artists they inspired certainly never were. Although the group did have their share of hits on this side of the pond and the other, the legacy of the group famously fronted by the often feuding Davies brothers runs far deeper than easy quantitative measures like charting hits or even albums sold.

“When you look at the original British Invasion acts — they’re one of them right alongside The Beatles and The Rolling Stones — which is crazy because the two other ones have gone on to astronomical levels, if they’re not the largest acts ever,” said Joey Hebdo, a Columbus based musician. “And I think that has a lot to do with their mentality. Ray Davies specifically knew he was a good writer and they knew they had quality material — but they weren’t willing to sacrifice the things it seemed like the other bands were willing to.”

Hebdo is a member of The Muswell Villebillies, a Columbus supergroup of sorts (featuring members of Hebdo, The Hoodoo Soul Band, The Everlasting Happiness, and Popgun) who will bring an evening of Kinks tunes to The Union (18 West Union St.) in Athens Friday, January 7. 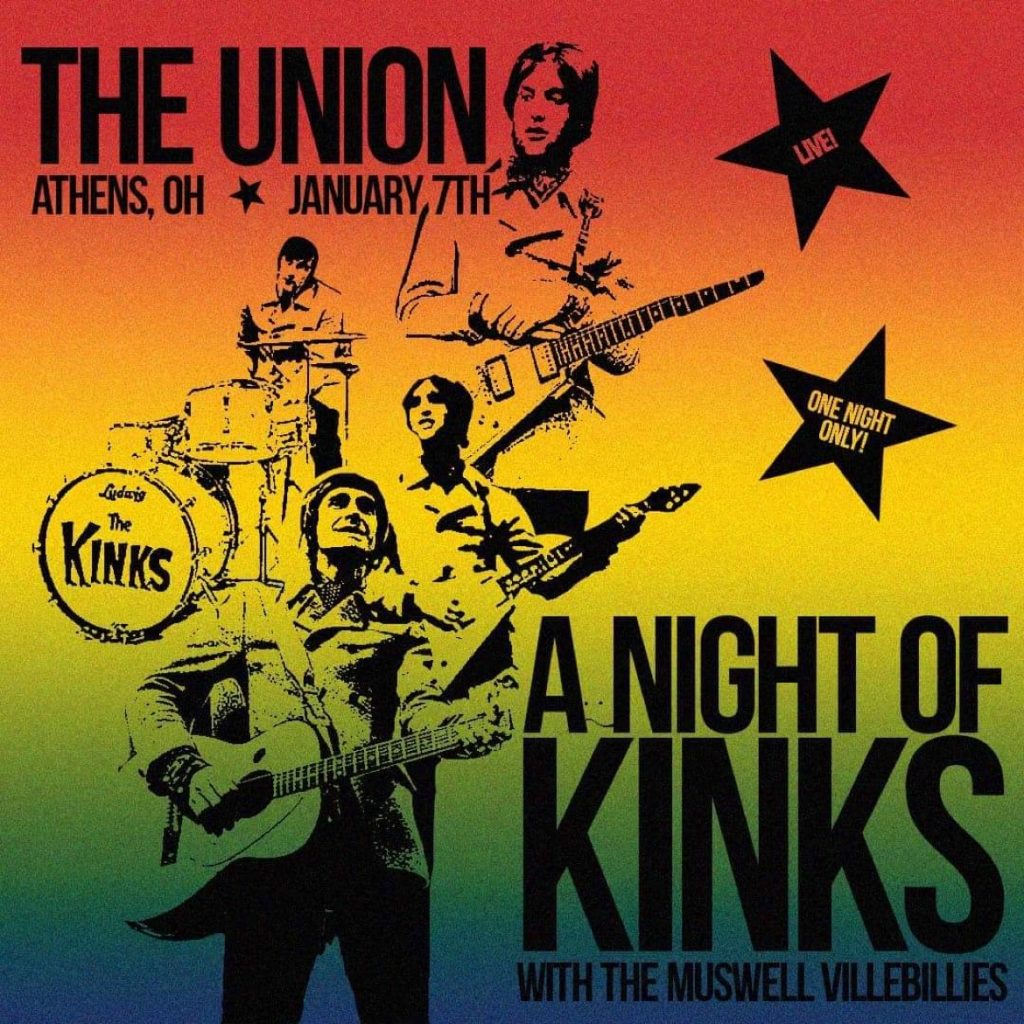 For Hebdo, bringing the project to Athens only makes sense. After all, it was in Athens, as an Ohio University student, that he was personally imbued with that same idiosyncratic spirit of The Kinks that has inspired so many others before him.

“The very first Kinks album I got into was ‘Something Else,’ and that was the record that got me. I mean, it really just grabbed a hold of me and I got obsessed with it,” said Hebdo. “This would’ve been a little bit pre-streaming where you didn’t have access to everything all the time, so I listened to it all the time and I didn’t even listen to another record of theirs for quite a while after that.”

Right smack dab in the middle of the only commercial niche that could have made the group easily palatable to American audiences, the British Invasion, The Kinks were banned from touring in the United States by the American Federation of Musicians – the widely accepted reason for this being the group’s famously rowdy live shows. This ban would not be repealed until 1969. By then, The Kinks were a very different band.

The Kinks Americans had last seen were a proto-hard rock garage band grinding out straightforward rockers like “You Really Got Me” and “All Day and All of the Night.” By the time Ray Davies had worked out a return to touring in the US for the band, they were fresh off the release of the nearly universally applauded yet admittedly more cerebral concept album “Arthur (or the Decline and Fall of the British Empire).”

Perhaps it was the US touring ban that kept The Kinks from commercial acclaim in the US – or perhaps American audiences just wouldn’t have known what to do with the band’s increasingly diverse, singular, and defiantly British sound even if The Kinks had been allowed to remain touring in the US. We’ll never be able to answer that question, but Hebdo speculates that even if The Kinks weren’t getting the commercial traction one might hope would be granted to them, they almost certainly were more than making up for that in creative satisfaction.

“As an artist, when you’re putting out quality stuff and you’re not needing the approval of the mainstream and the media, that’s huge. Any artist would be proud to have a catalog like The Kinks’ — something they know they did on their own with no one telling them they couldn’t do it,” said Hebdo. “Whenever I introduce The Kinks to somebody that hasn’t listened to them that knows music quite well and has their own tastes– a light bulb clicks on, and they start to realize all the gaps in the progression of popular music The Kinks fill in. I mean, you can hear it in artists that don’t even know where that sound in their work is coming from — but it just sounds like The Kinks and nothing before The Kinks sounded that way. They had a huge impact — but the mainstream wasn’t aware of that impact at the time.”

It’s often been written that The Kinks were “the first punk band,” a sentiment Hebdo agrees with. More than that, however, he also sees the group as one of the first art rock bands.

“Ray Davies being the main artist in the group, whatever he was into at the time, that’s the direction they were pushed in. Because he just didn’t care what other people thought,” said Hebdo. “I think larger bands weren’t allowed to be as artistic. I think that’s what later acts like Bowie pulled from The Kinks — this understanding that they were allowed to be artistic in popular music — that they were allowed to do what they wanted. It’s that rejective mentality of ‘we’re going to fight for what we want and what we are and we are going to do it right now,’ — it’s essentially a punk ethos. I think anybody that knows anything about creating or creativity or being artistic, I think there’s no way that can’t appeal to you.”

The Muswell Villebillies are made up of Hebdo and Tony McClung, David Vaubel, Jon Beard, Andy Harrison, Tony Zilincik, and Tim Perdue. The group formed in the early part of the COVID-19 pandemic, and began performing out as soon as they were given the opportunity.

“We put the group together, and the first show went really well and we said, ‘people really do care about The Kinks!’ Because it’s hard to tell sometimes what an audience reaction will be to a less mainstream act,” said Hebdo. “And we ended up with people at the shows who both knew a whole lot of The Kinks or maybe just knew a few hits — and they would sit through all the kooky British stuff and they ended up loving all of it. And all of a sudden we are sort of converting people, and that’s an amazing feeling.”

A Night of Kinks with The Muswell Villebillies is slated for Friday, January 7 at The Union in Athens. Proof of vaccination or a negative COVID-19 test is required to enter the venue.