Amidst the bewildering early days of the COVID-19 pandemic, Appalachian roots band Oyo treated a residential neighborhood in Marietta to a series of open-air shows performed in an empty Church of Christ parking lot.

I find this enormously beautiful, and not because I was there to witness any of these performances – I wasn’t. But I do know this: Oyo is made up entirely of the rare breed of performers who don’t even need amplification to captivate an audience.

Luckily for those of us who couldn’t catch Oyo during their short-lived church parking lot residency, the group’s dynamism has finally been committed to tape, and WOUB Culture premiered that debut, self-titled record a whole weekend prior to its February 8, 2022 release date. You can hear it, now as a BandCamp link, embedded above. 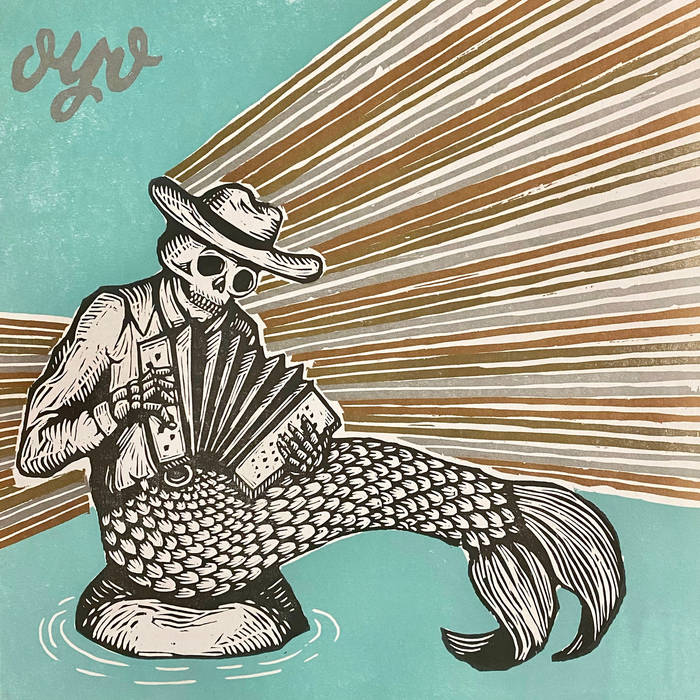 True to the band’s exquisitely oddball Appalachian aesthetic, “Oyo” (the album) was recorded over the course of a weekend in the belly of an abandoned church in West Virginia.

The result is a 12-track album brimming with heartrending contemplations on what exactly it means to be “home,” or perhaps more devastatingly yet, “in love.”

Track one is about home – kind of.

More precisely, album opener “My Kind” is all about defining just exactly what makes a place home in the grand scheme of a human life. Penned by Aaron Martin, the track opens with the sociable, reverberating sweetness of an oscillating mandolin and unfolds into a bittersweet rumination on the hunger one feels to find like minds.

The track served as Oyo’s first single – and, as the band so wisely pointed out, much like Boyz II Men’s debut 1991 single “Motownphilly,” the song also sort of tells Oyo’s origin tale — how they came to be “kickin’ it just for you” — as it were.

That tale begins several years ago when Martin, his wife and his six-month-old child moved from Davis, WV to Marietta, leaving behind a tight-knit community. A few years after the move, the couple still hadn’t quite gelled with anyone like they had in Davis. Until, that is, Martin found himself in the downtown Marietta storefront of JustAJar Design Press, owned and operated by his future bandmate Bobby Rosenstock. The two got to talking, and the rest, as they say, is history.

Martin is one of the band’s two chief songwriters, alongside Michael Bond.

Bond jokes that if Martin’s songs are the socializing and dancing at a party, Bond’s songs are the weirdos staring at their shoes. It’s difficult to articulate how exactly, but he’s pretty spot on. This is probably why a music journalist like me, who names Judee Sill, Paul Williams, and Alan Price among her favorite songwriters, found Bond’s songs so immediately captivating.

We get our first taste of his particular brand of hopeless, eclectic romanticism on “Something’s Wrong.” Like the famously unreliable narrative perspectives songwriters such as Randy Newman deploy – the poor sap starring in “Something’s Wrong” is – let’s face it – credulous as hell.

Bond said the song is about the magical thinking a trustworthy person entertains when they are very much in love with someone not-so-trustworthy. Cars stop working and phones lose reception; sometimes said untrustworthy partner even “comes back from Bible camp with bite marks in her hair.”

While “Something’s Wrong” indulges in a type of fantasy, the album’s next track, “Roads,” a Martin composition, brings us to very real place. In fact, a characters it details (Chippy) apparently actually played music at some point on stage with Oyo. Talk about observational lyricism! The tune rambles on comfortably with a jubilant, woozy, boozy undercurrent carrying the listener from one corner of nostalgia to another.

Next, we drift into a Bond tune, “Waste Your Time,” sporting not only a Leslie Gore reference, but also the poignant perspective of someone who declares they’ve “either got to paint my ceiling or quit lying on the floor,” bringing to mind Paul Simon’s 1973 philosophical reminder that “one man’s ceiling is another man’s floor.”

Before we go any further – let’s make something clear.

Although it’s a lot of fun for a music geek like myself (who hasn’t ever written a song) to think of songwriting as being easily divisible along McCartney/Lennon, Bacharach/David, Becker/Fagen sort of lines – I know it doesn’t really work that way. Influences meld together and the voices of a collaborative creative project find themselves intertwined in a singular vision.

This is my way of saying “Light In You” is the most “Bond” Martin ever gets throughout “Oyo,” and it’s also one of the record’s major highlights.

“Light in You” opens with a soft, warm guitar which expands into a spry mandolin serving as the initial propulsion for lyrics referencing a beloved musical trope: pills that fend off sadness. Things then expand further, unfurling quickly into a powerful musical current.

Latter album track “Don’t Be Gone” is what Bond described as his attempt at writing a “country song,” but which bandmate Cole Adair said is a lot more like a Violent Femmes song – making it, of course, my favorite track on the album.

Where do I begin with this one?

Why do I love it so?

It is the captivating drive of the snare?

The woeful moan of that fiddle riff?

The anticipatory dread pulsating at its core?

Or is it the explosively desperate energy of the following lyrical passage: “you’ll leave me in the supermarket/Between the twizzlers and the powdered milk/and I’ll come calling/If they just let me use the intercom”?

I quite haven’t made up my mind on this one yet, but I have a pet theory that all of these points play into my fondness for the track.

Hopefully, by now, you’ve started listening to the embedded stream above. Because once you do, I think you’ll understand the sentiment I’m closing this with.

Remember those open-air concerts I mentioned Oyo playing back in the harrowing spring and summer of 2020?

I can’t help but believe that in the midst those performances, the isolated, quarantined souls in the surrounding residential neighborhood were able, if just for a moment, to believe human experience to be perhaps just a little more joyful and beautiful than it is brutal and cruel.

And hasn’t that always been the point of making – and listening – to music?

The band will hold a release party for “Oyo” on Friday, February 11 at the Adelphia Music Hall (205 Second St., Marietta) with special guests Drift Mouth. Stream the album starting February 8 on Spotify and Bandcamp, and find it available for purchase in physical form at JustAJar Design Press (208 Front St., Marietta) and Clutch Collective (152 Front St., Marietta). Follow them on social media on Facebook, Twitter, and Instagram.