“The Great Ride” explores one of America’s most treasured biking destinations. Cyclists from all over the world are enjoying 335 miles of breathtaking scenery and fascinating history on two connecting trails: the Great Allegheny Passage (Pittsburgh, PA to Cumberland, MD) and the C&O Canal Towpath which continues to Washington, DC. 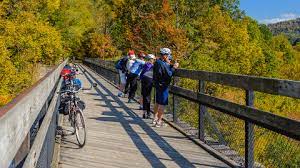 Cyclists go back in time – biking where mules once trudged a 185-mile path next to a canal, pulling goods-laden barges between Washington, DC and Cumberland, MD. When railroads made the canal obsolete, the C&O Canal Towpath was preserved as a national park. Today, bikers travel the forested, level trail that hugs both the remnants of the canal and the panoramic Potomac River. Quaint lock keeper houses, picturesque stone aqueducts, the glorious Great Falls in Maryland and the rustic Paw Paw Tunnel are among the many attractions along the C&O trail to its end in Cumberland – where the Great Allegheny Passage trail beckons. 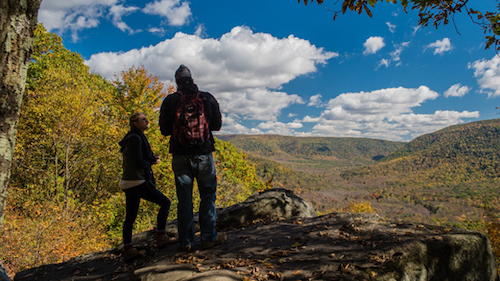 From mile marker zero in Cumberland, MD, the 150-mile Great Allegheny Passage crosses splendorous valleys, snakes around mountains, running alongside three rivers (the Casselman, Youghiogheny, and Monongahela) on its nearly level trail of former railroad lines. Cyclists pass through the Cumberland Narrows, cross the Mason-Dixon Line, breeze through the Big Savage Tunnel and top the Eastern Continental Divide at 2,392’. They weave through the lush Laurel Highlands, pedal next to the roiling white water of Ohiopyle State Park, journey through Western Pennsylvania’s mining and steel-making corridor – to end at Pittsburgh’s majestic Point State Park.

Drug Take Back Day in Ohio and Elsewhere