Solar projects are on hold as U.S. investigates whether China is skirting trade rules

AUGUSTA, Maine (Maine Public) — Hundreds of large-scale solar power projects are on hold in the U.S. as the industry awaits the outcome of a federal investigation into potential trade violations involving solar panels bought from Asian suppliers.

Department of Commerce investigators hope to determine whether Chinese manufacturers are skirting longstanding U.S. duty rules on solar imports from China by funneling components through affiliates in four nearby countries — Malaysia, Thailand, Cambodia and Vietnam — where panels are assembled for export to the U.S.

The four countries at the heart of the investigation account for more than 80% of solar panel imports, according to the American Clean Power Association.

The Solar Energy Industries Association (SEIA), a Washington, D.C.-based trade group that opposes the investigation, said solar installation forecasts for 2022 and 2023 are down by 46% attributable to concerns about the inquiry — though other pressures including pandemic supply chain issues could play a role.

The group estimates a reduction of 24 gigawatts in planned solar capacity in the next two years — more than the industry installed in all of 2021.

State solar industries are in limbo

In Maine, recent state climate policies and incentives have fueled a boom in solar development. In just two years, dozens of the state’s gently rolling hills have sprouted long rows of solar arrays.

Now, some developers say they have to push the pause button on new construction.

On a visit to one 35-acre site outside the state capital of Augusta, Leo Azevedo, procurement manager for an Ireland-based company called BNRG, showed off a newly energized 9-megawatt array that can power more than 1,500 homes. Thanks in part to low-cost solar modules sourced from Southeast Asia, that electricity will cost Mainers less than half the going rate most of them are paying for electricity that’s largely produced by fossil fuels.

But just across a long fence, there’s a bigger project that would deliver electricity to Maine consumers at a price that’s better still.

If the Department of Commerce finds violations in its investigation, Azevedo says, it has wide latitude to assess duties retroactive to the investigation’s start in April — leaving the importers with much bigger bills than they anticipated when they placed their orders.

The inquiry is a quasi-judicial process intended to “ensure a level playing field for U.S. businesses and workers,” said Rafael Benavides, a Commerce press secretary. Investigators will assess whether the South Asian manufacturers are subject to existing import taxes based on their relationship with Chinese suppliers and, if so, the rate at which each manufacturer’s products should be taxed.

“Worst-case scenario, you can think about retroactive tariffs of up to 240%,” Azevedo said. “But we really don’t know what it is. So there’s just too much risk to order panels right now, and that’s just the end of it.”

In a recent industry survey, most large-scale U.S. solar developers said uncertainty was causing delays and cancellations, putting billions of dollars’ worth of carbon-free energy capacity at risk.

“The investigation alone is wiping out a decade of solar job growth,” says Abigail Ross Hopper, president and CEO of the SEIA. “It’s stunning.”

She says this was supposed to be the green economy’s moment in the sun.

“We have a president who believes in climate change and addressing the crisis, and we have a House and Senate that are controlled by Democrats,” she says. “And there is so much we can do to help address so many of the challenges that we have.”

The problem’s true scope is still emerging. An Indiana utility said it had to postpone several solar projects and will keep a coal-fired plant running years longer than planned.

A threat to Biden’s climate goals

Solar panel costs have dropped dramatically in the past decade or so, and the industry’s expansion had been a rare bright spot for a president whose climate ambitions have largely been stymied by political realties in Washington.

Biden set a goal of ending greenhouse gas emissions in the power sector by 2035 — a target the White House hoped to reach through a dramatic expansion of renewable energy capacity and carbon capture and storage technology.

But if the government decides to impose retroactive taxes on the country’s primary sources of solar panels, the resulting stress on the supply chain is likely to dramatically increase costs for U.S. solar installers — and put a damper on the industry’s expansion.

Earlier this month, a bipartisan group of 21 senators sent a letter to the Biden administration calling on the president to resolve the issue quickly. 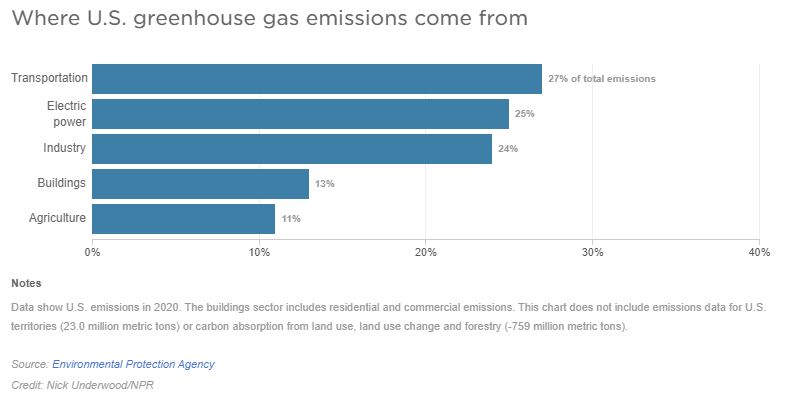 “Already, as a result of Commerce’s decision to initiate this investigation, industry surveys indicate that 83% of U.S. solar companies report being notified of canceled or delayed panel supply,” the senators wrote. “Left unaddressed, cutting off this supply of panels and cells also could cause the loss of more than 100,000 American jobs, including approximately 18,000 manufacturing jobs.”

Even some members of Biden’s administration appear exasperated by the Commerce Department’s inquiry.

Testifying before the Senate Committee on Energy and Natural Resources on Thursday, Secretary of Energy Jennifer Granholm suggested that the investigation is an existential threat to the U.S. solar industry.

“At stake is the complete smothering of the investment and the jobs and the independence we would be seeking as a nation to get our fuel from our own generation sources,” Granholm said.

“Solar industry representatives and advocates have communicated these concerns to us, and we are reviewing our options, consistent with requirements about independence of such investigations,” said Andrew Bates, a White House deputy press secretary.

A source familiar with the administration’s thinking indicated to NPR that while the White House is concerned about the consequences of the investigation and has urged the Department of Commerce to act quickly, the slowdown is ultimately the consequence of an American business making a legally protected complaint.

The investigation process, designed to be insulated from political pressures, could stretch out for months as investigators work to understand foreign manufacturers’ relationships with Chinese suppliers. A finding is expected by late August though the solar industry and its political allies are calling for a speedier review.

Benavides, the Commerce press secretary, told NPR in a statement that while industry concerns are taken into consideration as part of an investigation’s damage assessment process, they do not influence the department’s inquiries or determinations.

There is also no legal provision, he said, “that would allow us to consider political goals and priorities.”

Probe began with a complaint from a U.S. solar panel manufacturer

This situation was set in motion by a San Jose solar panel maker called Auxin Solar. In February, the company filed a petition with the Commerce Department alleging that Chinese companies were circumventing trade duties that are supposed to keep foreign, state-subsidized companies from dumping products in the U.S. and undercutting American manufacturers.

“Yes, doom and gloom scenarios are out there,” says company CEO Mamun Rashid. “I’ve seen all the headlines.”

Rashid has been condemned by many in the industry, but, he says, fair trade is fair trade. If the Commerce Department decides that the solar-panel playing field needs to be leveled, he says, industry and government will find a way to cope, including by investing in domestic panel-making capacity.

“I think the business models will need to be reassessed and will be reassessed,” he says. “No one is going to walk away from hundreds of millions or billion-dollar businesses.”

But for now, the sector’s recent surge is sputtering, putting some climate policy goals, like Maine’s, in question.

At the Maine solar plant, procurement manager Leo Azevedo says his company and their partners have planned projects in the state and elsewhere that together could power tens of thousands of homes, carbon-free, and produce hundreds of construction jobs too.

“You’re talking about 200 to 300 megawatts in the next three years that’s at risk,” he says. “So that’s jobs in North Carolina, Virginia, Ohio and Indiana. So that’s a lot of jobs, a lot of cheap electricity that is just in jeopardy.”

“As you can see the weather outside is beautiful, but nothing’s going on,” adds his colleague Adam Farkes, head of construction at BNRG. The company is a partner in the proposed project near Augusta. Farkes gives a wistful look at the untouched 87-acre site where preconstruction work should be starting now.

“It seems a little bit counterproductive to have these goals for climate change and then at the same time you’re not letting us build anything,” he says. “We should be building.”

Hundreds of large-scale solar power projects are on hold in the United States. It’s a potential threat to President Biden’s climate agenda, and it’s because of something done by President Biden’s administration. The industry is reacting to a federal investigation of potential trade violations involving solar panels bought from Asian suppliers. Maine Public Radio’s Fred Bever reports.

LEO AZEVEDO: You might have seen some droppings at the entrance of the site. So we have a local sheep farmer that brings his sheep to graze on the grass.

BEVER: This array can power around 1,500 homes. And thanks in part to low-cost solar modules sourced from Southeast Asia, that electricity will cost consumers a good deal less than fossil fuel energy sources. But just across the fence, a bigger, even cheaper solar electricity project is on hold.

AZEVEDO: So right now, most of the panel manufacturers aren’t actually taking orders.

BEVER: That’s because the Department of Commerce is investigating whether Chinese panel manufacturers avoided duty requirements by funneling components through affiliates in nearby countries. Azevedo says if Commerce finds violations, it has wide latitude to assess duties retroactive to the investigation’s start in April.

AZEVEDO: Worst-case scenario, you can think about retroactive tariffs of up to 240%. But we really don’t know what it is. So it’s just too much risk to order panels right now. And that’s just the end of it.

BEVER: In a recent industry survey, most large-scale U.S. solar developers said uncertainty was causing delays and cancellations, putting billions of dollars’ worth of carbon-free energy capacity at risk.

BEVER: Abigail Ross Hopper of the Solar Energy Industries Association says as many as 100,000 jobs are at stake at a time, she adds, that was supposed to be the green economy’s moment in the sun.

HOPPER: We have a president who believes in climate change and addressing the crisis. We have a House and a Senate that are controlled by Democrats.

BEVER: The problem’s scope is still emerging. An Indiana utility says it has to postpone several solar projects and keep a coal-fired plant running years longer than planned.

MAMUN RASHID: Yes, doom and gloom scenarios are out there. I’ve seen all the headlines.

BEVER: That’s Mamun Rashid, CEO of Auxin Solar, the small California panel maker that petitioned the government to level the solar panel playing field. Rashid’s since been condemned by many in the industry. But he says fair trade is fair trade.

RASHID: I think the business models will need to be reassessed and will be reassessed. But no one is going to walk away from hundreds of millions or billion-dollar businesses.

BEVER: But for now, the sector’s recent surge is sputtering. At the Maine solar plant, construction supervisor Adam Farkes gives a wistful look to the untouched site next door.

ADAM FARKES: It seems a little bit counterproductive to have these goals for climate change. And then at the same time, you’re not letting us build anything. We should be building.

BEVER: Investigators are expected to make a preliminary finding in August. The solar industry and its political allies are calling for a speedier review.