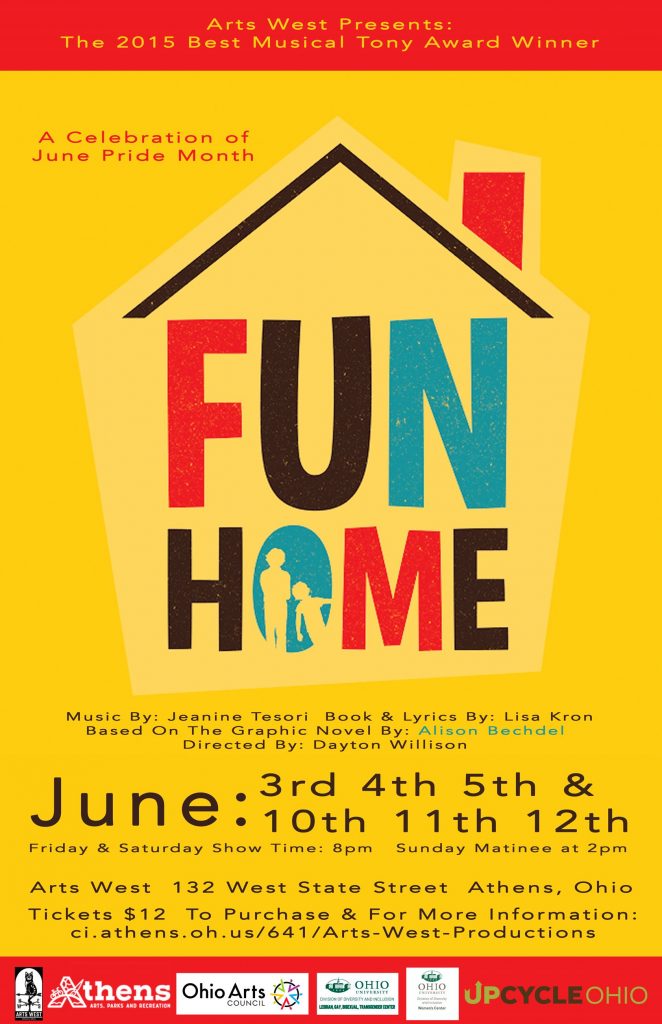 “Fun Home” centers on Bechdel’s extraordinarily complex relationship with her father, Bruce Bechdel, a high school English teacher and funeral director. Both the musical and the memoir it is based on explore themes of sexual identity, mental illness, emotional abuse, and dysfunctional family dynamics.

“I’ve worked at Arts West for close to 10 years, so I have a pretty good grasp on the space, and I also wanted to present challenging content that might speak deeply to the community,” she said.

The show features three different versions of Alison: at age 43 as the narrator, at age 20, and at age 9. The production’s director, Arts West Program Director Dayton Willison said defining the correlations between these three characters has been one of the most rewarding aspects of working on the production.

“There are three different women who are playing this character, and we were able to create moments where those characters really connect with each other, which was a real joy,” said Willison. “It was surprising just how impactful that could be. And just how much that would resonate.”

Arts West Program Director Carter Rice is playing the part of Bruce Bechdel. Although Bruce is a complicated character in just about every sense, Rice says he’s found aspects to the character that make him relatable.

“I have to get into a mindset of being a father, of having children, of having other people to take of – however, I wouldn’t say my character is selfish so much as he is self-inclined. He’s aware of what he looks like, of what he does, and he’s trying to juggle all of these things, all of these responsibilities. And I feel like that’s something anyone who has ever had to juggle multiple things will relate to and can understand about Bruce’s mindset,” he said.

Willison said he’s worked to mine a variety of powerful messages from the show over the course of his time directing it.

“There’s so much going on in this piece past the LGBTQ issues that are being presented. There’s a lot about family and about one’s relationships to their family, and about forgiving the people who shaped you into the person you are — because if you forgive them, you can find freedom within that forgiveness,” said Willison. “I will say this show is a gut puncher with an absolutely beautiful ending. An ending that makes you leave knowing you just experienced something that made your heart hurt, but in a beautiful way.”

One Arrested, One Hospitalized in Nelsonville Shooting

Local Law Enforcement Use of Force Policies Vary, Emphasis on Training Does Not