Hocking College will present the inaugural Black Diamond Music and Arts Festival this weekend on the school’s campus. The event kicks off on Friday, June 10 and ends on Saturday, June 11, featuring over 20 bluegrass and country music performers, including Elle King, Marty Stuart, McGuffey Lane, and more.

Dean of Workforce Development and Community Engagement at Hocking College Sean Terrell said Hocking intended to create a “Southeast Ohio experience” for attendees with the festival.

Both festivals have expressed support for one another, each event ultimately working towards the same goal of economically and culturally enriching Southeast Ohio.

Terrell said Hocking College views the festival as both a way to provide further enrichment for students who are currently enrolled at the school and as a way to highlight the programs available for prospective students.

“We decided early on that if we were going to put on a music festival on Hocking’s campus, we would organize it in such a way that the folks who came to enjoy the event would also have an opportunity to touch and taste and feel the many programs at Hocking. And in order to do that, we had to get our students involved,” said Terrell, noting Hocking offers more than 50 academic programs. 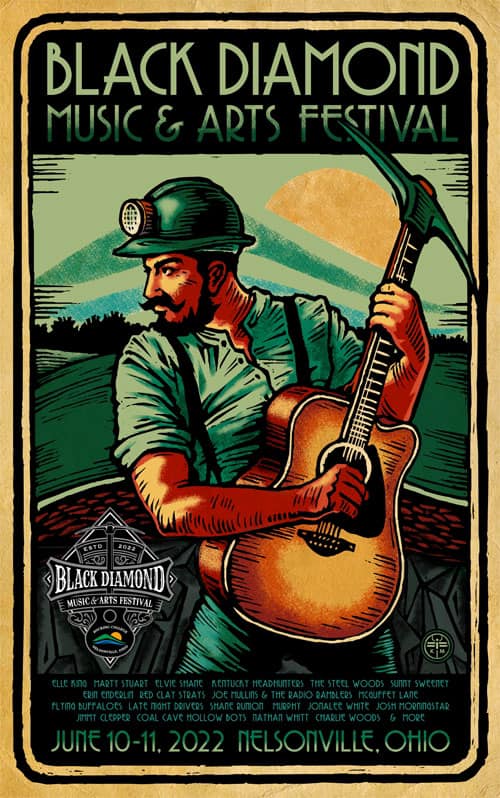 The Black Diamond Music Festival isn’t just a music festival, it’s an arts festival, too. Local vendors will be set up at the festival to sell their wares, and Terrell says the festival will also provide arts programming.

Terrell said that the festival will be heavily utilizing local businesses of all types as a part of their overall goal to contribute to the economic health of our region.

“We need more reasons for people to travel into Southeast Ohio. And if we can create a festival that kind of brings the residents and the communities together and connect them to the tourists that come in and visit us, then we’ve created a, a pretty special event,” said Terrell. “Driving tourism dollars into Southeast Ohio lifts up the local economy, which lifts up the local community, which in turn creates an economic impact.”