POV, now in its 35th year as America’s longest-running independent documentary series, presents a Special Encore Presentation of the gripping 1988 Academy Award® nominated film, Who Killed Vincent Chin?, by filmmakers Christine Choy and Renee Tajima-Peña, on Monday, June 20, 2022 at 10pm. Who Killed Vincent Chin? was recently restored by the Academy of Motion Picture Arts and Sciences, and also selected for the National Film Registry.

This year marks the 40th anniversary of the racially motivated murder of Vincent Chin, a Chinese American, murdered by two white men, Ronald Ebens and Michael Nitz, in Detroit, Michigan on June 19, 1982. The documentary, which originally aired on POV in July 1989, details the incident from initial eye-witness accounts, the ensuing murder trials to the lenient sentences the assailants received, and the repercussions for the families and community involved. Who Killed Vincent Chin? also chronicles how the case brought the disparate Asian American communities of Detroit together for the first time, and how they transformed themselves from a grassroots advocacy group into a national movement. 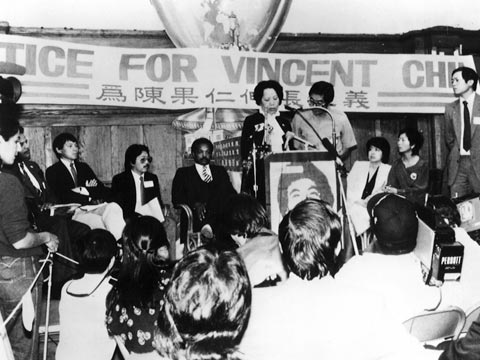 Their efforts helped bring public attention to the anti-Asian hate that led to Vincent Chin’s murder, and encouraged Asian American groups across the country to fight for equality and justice. The U.S. Department of Justice brought federal civil rights charges against the killers, who were ultimately acquitted on appeal, on grounds of pre-trial publicity and errors made with witnesses.

“I was vaguely aware of the killing of Vincent Chin in 1982. The next year, when I had the opportunity to meet Lily Chin, Vincent’s mother in Detroit, Michigan, I knew this was a story that would make an impact. The project started as a short film to help the American Citizens for Justice (ACJ) raise the legal fee but with the support from the Corporation for Public Broadcasting, the film was expanded. It was a privilege to have taken part in the telling of this story nearly forty years ago and still see its relevance and importance today.” said Who Killed Vincent Chin? filmmaker Christine Choy.

“We knew who killed Vincent Chin, but the real question was why? Was it because of his race? For me it was a Rashomon-like enigma, trying to untangle the conflicting perspectives of the people who lived through the case. It also revealed the fractures in America itself, and ultimately, how people bridged those divides to fight for justice” Who Killed Vincent Chin? filmmaker Renee Tajima-Peña added.

Who Killed Vincent Chin? represents a critical turning point for Asian Americans with chilling relevance today. Anti-Asian sentiments that were further stoked by the COVID-19 pandemic have contributed to ongoing xenophobia, particularly against Chinese Americans, though they have affected the broader AAPI community. From March 19, 2020 to December 31, 2021, over ten thousand hate crime incidents were reported to Stop AAPI Hate, a nonprofit coalition tracking incidents of hate and discrimination against Asian Americans and Pacific Islanders in the United States. Breaking news headlines about the 2021 Atlanta and Indianapolis shootings, and the recent murders in New York City of Christina Yuna Lee and Michelle Go as well, show that these hate crimes are disproportionately targeted at the elderly and Asian American women.

“It’s such an honor to present Who Killed Vincent Chin? again at this moment and especially on the heels of executive producer Juanita Anderson joining our board of directors. Who Killed Vincent Chin? is a watershed moment in filmmaking craft as well as in building and unifying an intersectional political project for the Asian American community,” said executive director of American Documentary and executive producer of POV Erika Dilday, “Now more than ever we can feel its resonance, and I’m so happy to make this essential work newly accessible to millions of viewers on PBS.”

“The brutal attack on Vincent Chin was a harrowing but significant incident in Detroit’s and America’s history,” said Rich Homberg, president and CEO of Detroit Public Television (DPTV). “This film is a moving testament to the loss of a young man’s life and to the people who stood up to protest this terrible injustice. It speaks volumes now more than ever about the wave of discrimination and violence against Asian Americans we continue to witness.

What Americans will do to feel safe in schools on “Bulletproof” on INDEPENDENT LENS – Feb. 14 at 10 pm