Bringing respect and dignity to the forgotten: “Who Lies Beneath: The Asylum”

A new limited podcast series has been released by WOUB Public Media. “Who Lies Beneath: The Asylum” tells the true-life stories of people who were buried in numbered graves at an abandoned mental health facility.

Host and creator Cheri Russo describes to Spectrum host Tom Hodson how she and a team of experts identified those buried in certain graves and fleshed out their lives through the help of voice actors.

It is her hope to bring dignity and respect to those who were abandoned by their families and reduced to numbers upon their deaths at what was once called a “Lunatic Asylum.”

She talks about how women were often institutionalized and abandoned for problems like postpartum depression and other childbearing issues.

Men, who were veterans, were often put in the asylum for what we now call post-traumatic stress syndrome (PTSD).

Through the help of a library archivist, a medical historian, a counsellor and others, the lives and situations of these individuals have been reconstructed.

It is the desire of Russo to expand this series to help people across the nation bring recognition to forgotten loved ones. If you would like to share your story with the Who Lies Beneath team, please email: wholiesbeneath@woub.org 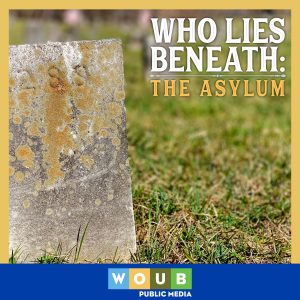