Discover the fascinating story of an iconic American garment: “Riveted: The History of Jeans” on AMERICAN EXPERIENCE, Jan. 10 at 9 pm

Documentary Explores The Evolution of the Iconic American Garment — From Slavery to the Wild West, Hippies, High Fashion and Hip-Hop

AMERICAN EXPERIENCE kicks off its new Winter-Spring season with “Riveted: The History of Jeans,” the fascinating and surprising story of the iconic American garment. Worn by everyone from presidents to supermodels, farmers to rock stars, they’re more than just a pair of pants — America’s tangled past is woven deeply into the indigo fabric. From its roots in slavery to the Wild West, youth culture, the civil rights movement, rock and roll, hippies, high fashion and hip-hop, jeans are the fabric on which the history of American culture and politics are writ large. Written, directed and produced by Anna Lee Strachan and Michael Bicks and executive produced by Cameo George.

The ultimate symbol of cool, jeans have become a wardrobe staple worldwide— at any given moment, half the people on the planet are wearing them. “Riveted” explores the garment’s rich history, featuring interviews with a diverse cast of historians, authors, designers and so-called “denim heads.”

The story of jeans usually begins with Levi Strauss, a Bavarian immigrant looking to make his fortune selling garments to the 49ers during the California Gold Rush. But half a century before Strauss, enslaved people in the American South were wearing a precursor of denim made from a coarse textile known as “slave cloth.” The blue hue of jeans resulted from an arduous dyeing process using the indigo plant. Eliza Lucas, the daughter of an 18th-century colonial governor, has long been credited as the savvy entrepreneur who jump-started the southern economy with indigo production. Left out of this narrative are the West African enslaved people, whose invaluable expertise for growing, processing and dyeing the plant had been brought with them.

Though Levi Strauss is typically credited with the “invention” of blue jeans, “Riveted” reveals the story of Jacob Davis, who added reinforcing copper rivets to the pants. This innovation created a garment so strong that it came to clothe nearly all American laborers by the 1930s.

The rise of dude ranch culture would change the perception of blue jeans as working-class attire. A huge fad in the 1930s, American women of a certain class vacationed at these working ranches, helping with the chores and enjoying a taste of the cowboy life made popular by Hollywood. These women were able to wear pants, perhaps for the first time. Jeans soon evolved into a garment not just for labor but for leisure, moving off the pages of the Sears catalogue and onto the pages of Vogue.

During the postwar era, jeans were once again reinvented. Suddenly, denim pants weren’t just about freedom and the Wild West anymore; they were now the emblem of bad boy cool. From the moment Marlon Brando donned a pair of Levi 501’s in The Wild Ones, jeans would never be the same. For the first time, being a “teenager” became a distinct phase of life, and jeans were the unofficial uniform of teen rebellion, prompting some schools to ban them. Jeans manufacturers fought back, forming the Denim Council, which launched a multi-media assault to convince the public that jeans would not corrupt their children.

The story of denim in the 1960s frequently focuses on how the hippie counterculture turned blue jeans into a vivid garment of protest. Often overlooked is denim’s pivotal role in the civil rights movement, according to Tanisha Ford, professor of History at CUNY, who reveals the story of the denim-clad Black college students who traveled south to organize protests. These “rebels with a cause” transformed the garment into a potent symbol of solidarity with the Southern Black working class.

By the 1970s, jeans had evolved into a billion-dollar industry, finding a home in nearly every closet in America. The rise of “designer jeans” and labels such as Jordache, Calvin Klein and Gloria Vanderbilt made jeans a designer item many could now afford. Sales skyrocketed, and high fashion, previously reserved for the elite, began merging with mass culture.

The emergence of hip-hop in the 1980s and 90s pushed jeans into a new realm. Baggier cuts and subversive takes on preppy, high-end brands such as Ralph Lauren and Tommy Hilfiger reflected anti-establishment and rebellious notions. As Kim Jenkins, professor in Fashion Studies at Ryerson University and principal researcher for The Fashion and Race Database, notes, “Not only do we see hip-hop artists able to remix sounds, like in music, but they’re also able to take clothing and remix it for their own means. To get your hands on that clothing and wear it is subversive in a way. Because it is saying, ‘I’m not supposed to be wearing this. But look at me: I am.’” 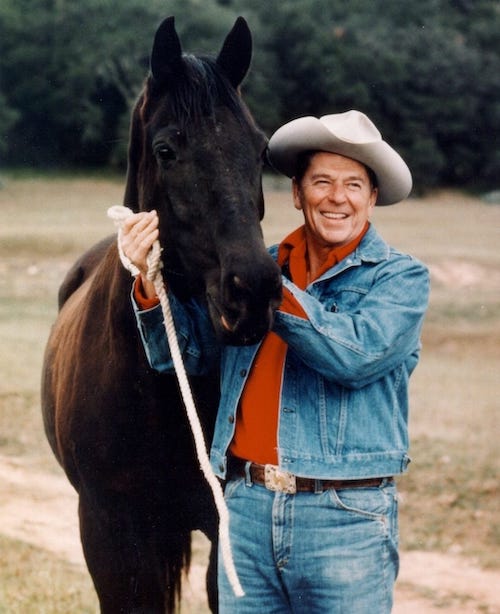 Boot cut, flare, ripped and faded. Mom jeans, dad jeans, skinny jeans. Everyone has their favorite style and their favorite pair. “Jeans are the perfect, quintessentially American item through which to examine the complex story of America,” says American Experience executive producer Cameo George. “They reflect their times and provide a unique and unexpected starting point for discussions of race, gender, class and culture. And they’re also one of the few things we all agree on—we all love our jeans!”

Stephen Aron is President and CEO of the Autry Museum of the American West and Professor Emeritus of History at UCLA.

Daina Berry is a Professor and Chair of the History Department at UT Austin.

Adrienne Rose Bitar is a historian at Cornell University and author of Romancing the Dude Ranch, 1926-1947.

Tanisha C. Ford is Professor of History at The Graduate Center, CUNY, where she teaches courses on African American history, biography and memoir, and the geopolitics of fashion. She is the author of Liberated Threads: Black Women, Style, and the Global Politics of Soul.

Rabbit Goody is a textile historian and master weaver who has created historically accurate fabric for films, including Amistad and The Color Purple.

Bill Hayes is the author of American Biker: The History, the Clubs, the Lifestyle, the Truth.

Tommy Hilfiger is an American fashion designer and winner of the Geoffrey Beene Lifetime Achievement Award from the Council of Fashion Designers of America.

Melissa Leventon is a specialist in European and American costume and textiles and former Curator-in-Charge of Textiles at the Fine Arts Museums of San Francisco.

Emma McClendon is a fashion historian, curator, author, and former Associate Curator of Costume at The Museum at FIT. She is the author of Denim: Fashion’s Frontier.

Catherine McKinley is the author of Indigo: In Search of the Color That Seduced the World.

Evan Morrison is a historian of denim and founder of the White Oak Legacy Foundation, which aims to preserve Greensboro, North Carolina’s long history of denim production.

Kimberly Jenkins is Assistant Professor of Fashion Studies in the School of Fashion at Ryerson University and the founder of The Fashion and Race Database, an online platform filled with open-source tools that expand the narrative of fashion history and challenge misrepresentation within the fashion system.

Seth Rockman is Associate Professor of History at Brown University and author of the essay “Negro Cloth: Mastering the Market for Slave Clothing in Antebellum America.”

Jonathan Square is Assistant Professor of Black Visual Culture at Parsons School of Design and author of Negro Cloth: How Slavery Birthed the Global Fashion Industry.

Valerie Steele is director and chief curator of The Museum at the Fashion Institute of Technology.

James Sullivan is the author of Jeans: A Cultural History of an American Icon.

Holly George Warren is an award-winning author whose books include How the West Was Worn.

Just what the veterinarian ordered: “All Creatures Great and Small, Season 2” on MASTERPIECE – starts December 11